Two facts to begin with:

Except from the two XHP50 LEDs, the other parts were salvaged from e-waste. The two heat dissipators on the right came from a mainboard heatsink that I cut in two. The frame that will hold the parts is an 80 mm computer case fan with the fan and its grid removed. Finally there is a standard power jack that allows for fast cabling and replacing the power source. 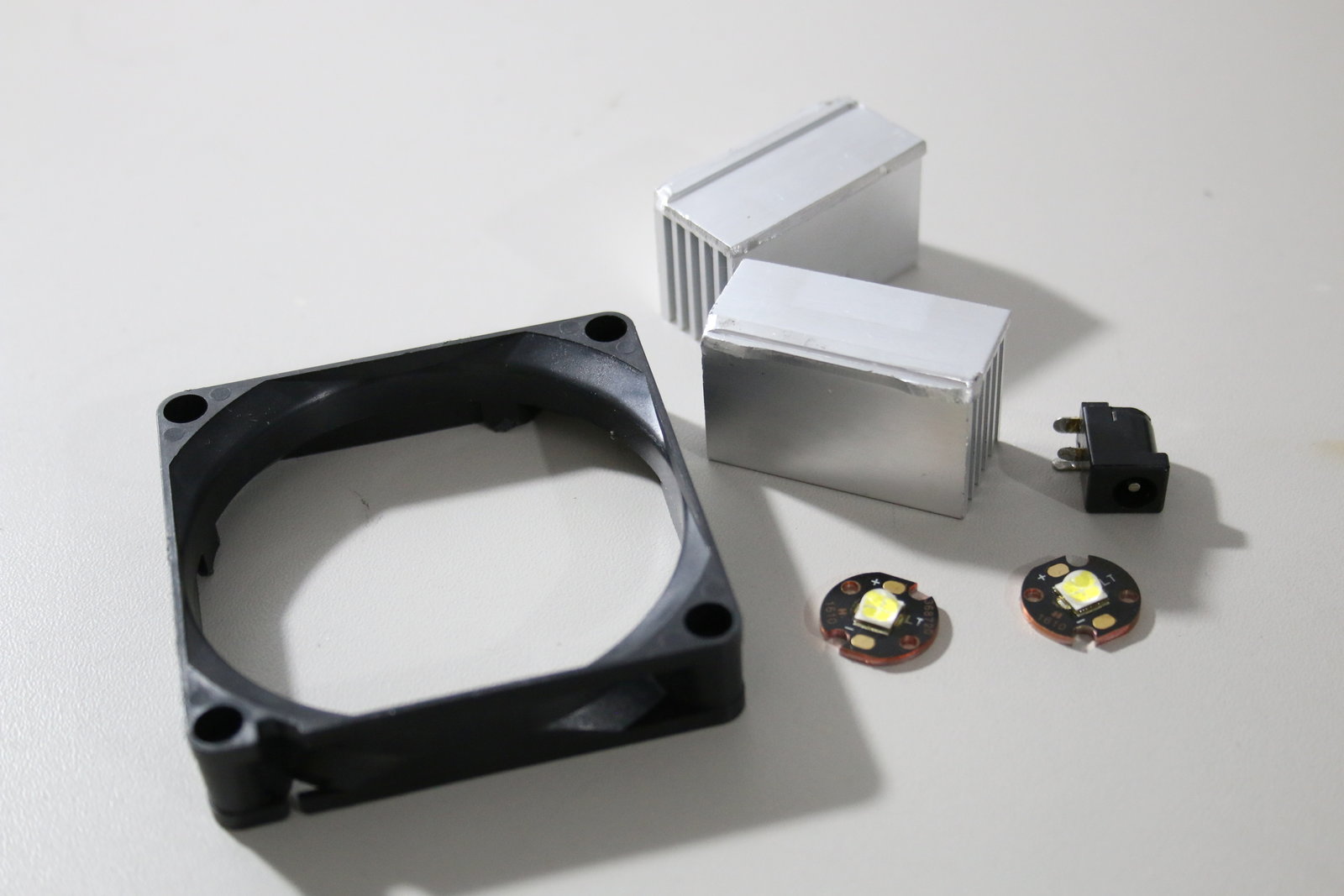 First, I drill holes in the heatsinks for the LED base boards. 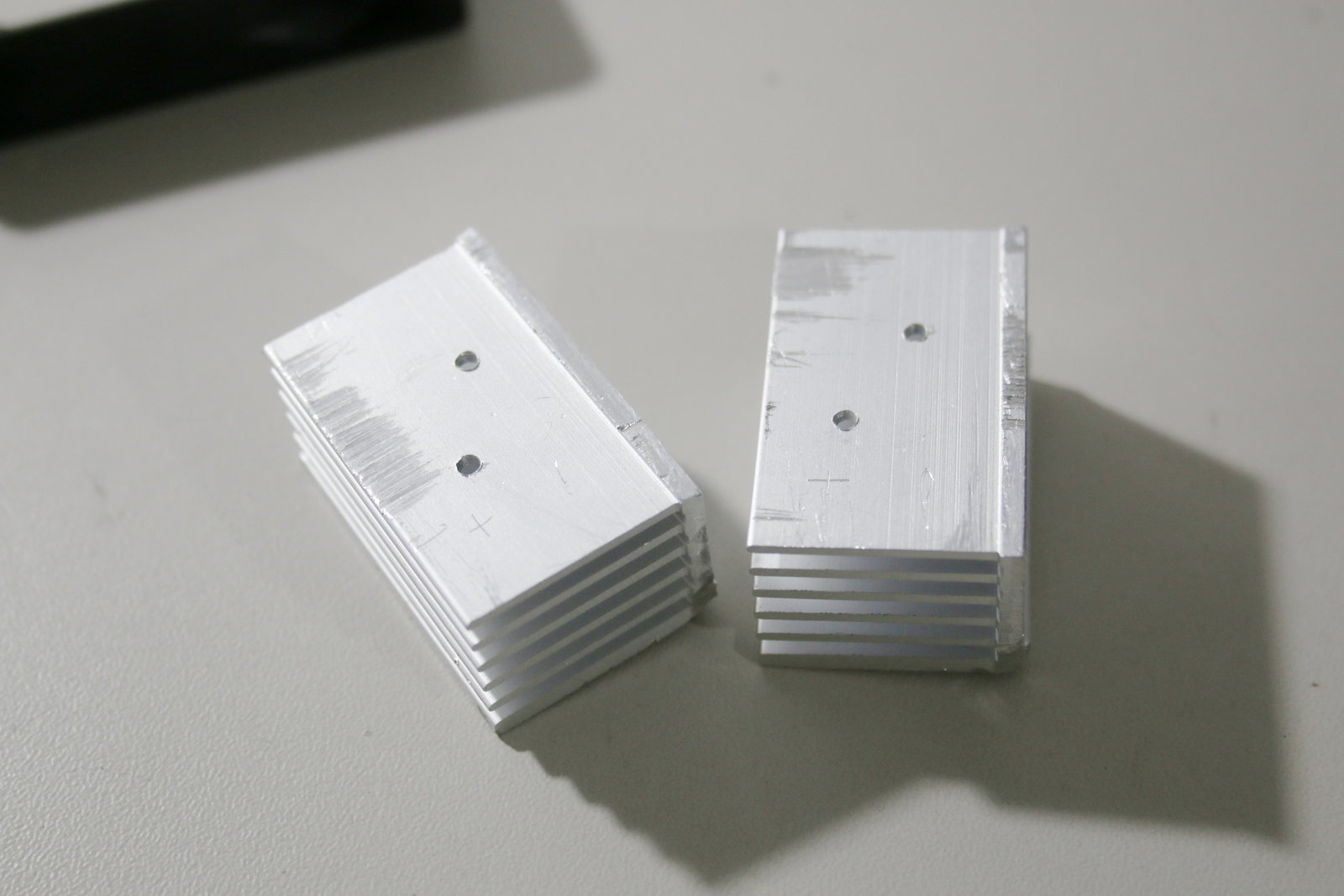 The base boards get some Gelid GC-Extreme thermal paste on their undersides and are screwed onto the heatsinks. 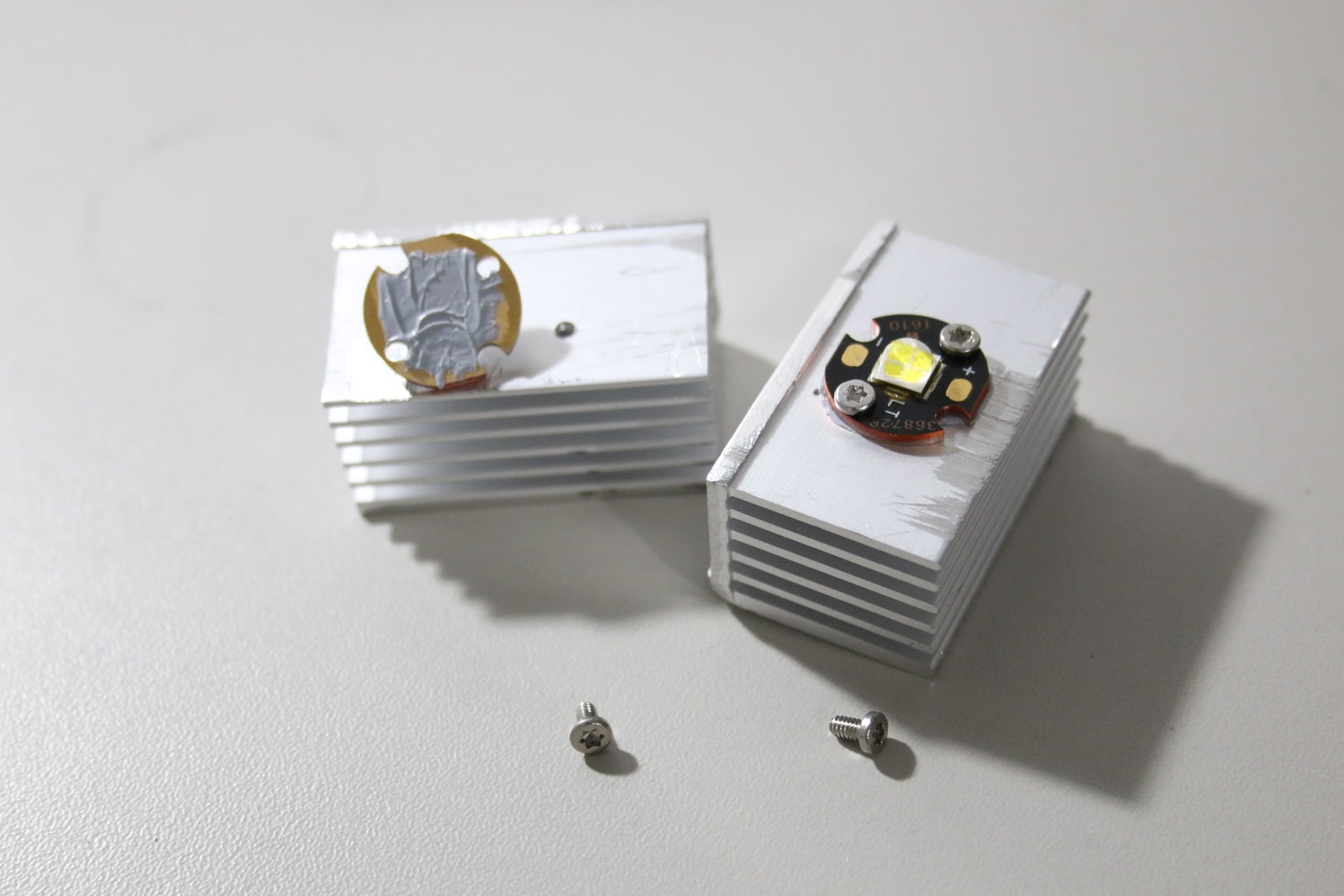 I use superglue to hold the heatsinks on the fan frame. Note that the heatsinks would soon come off with superglue alone (too brittle...). It is just there to allow for a better assembly in the following. 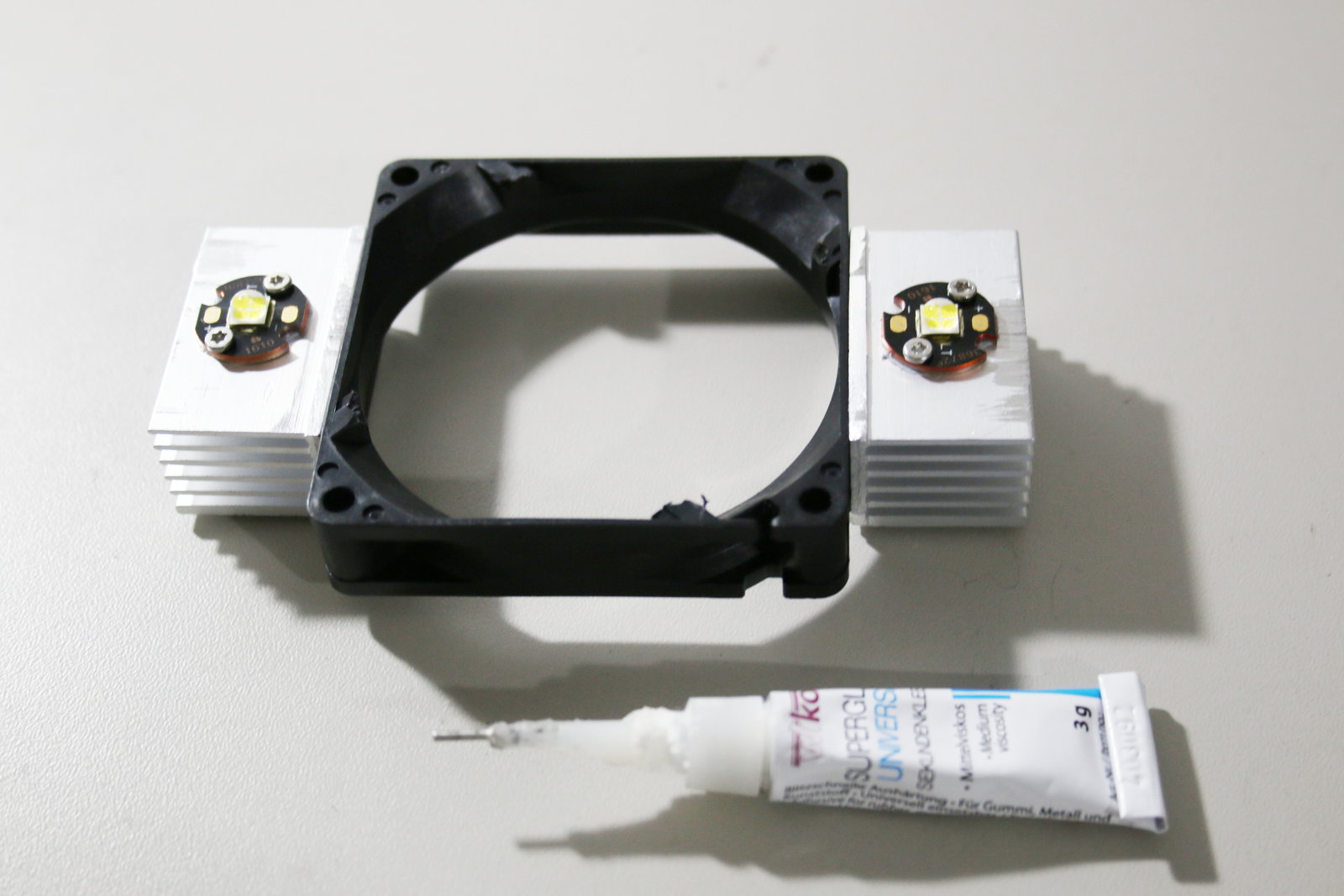 To really hold the heatsinks in place, I use a strong cord material. I thread it several times through the heatsink ribs and the holes in the fan frame whereby I make strong knots after each tour around the four corners. 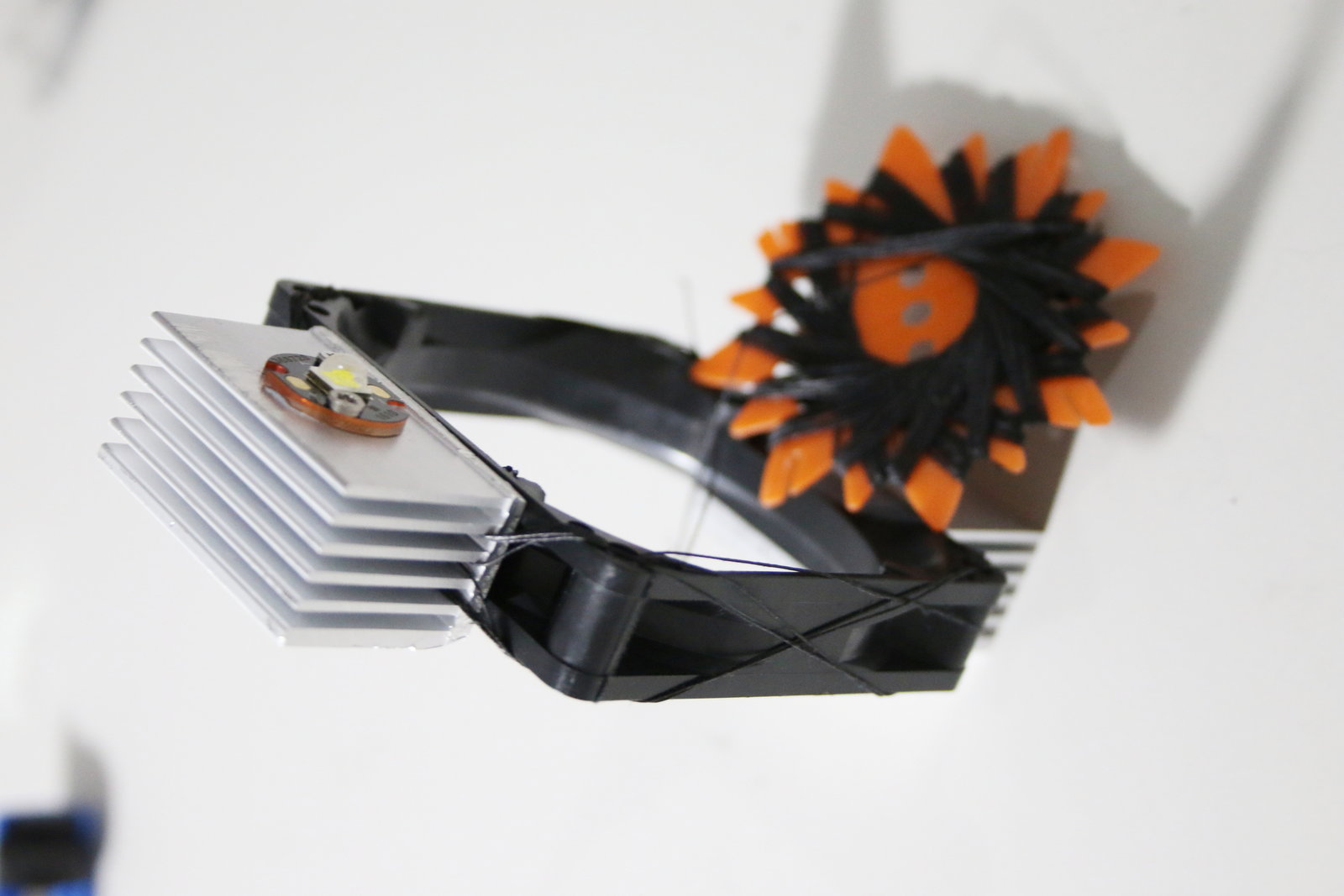 Then I wire the LEDs in series and solder them to the power jack. The wiring is also threaded through the fan frame to add additional stability. 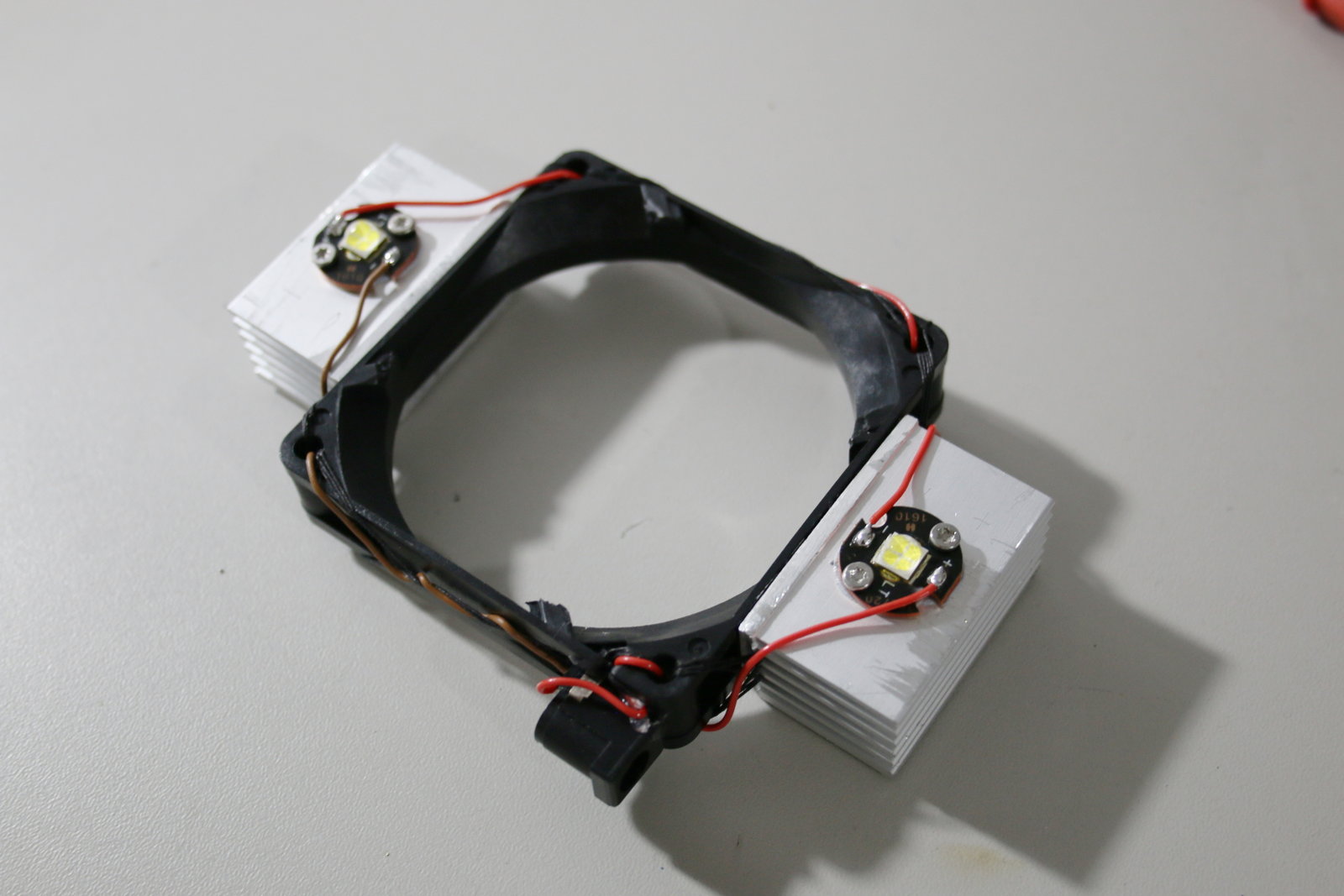 A first test with 12 volts shows that I can continue. 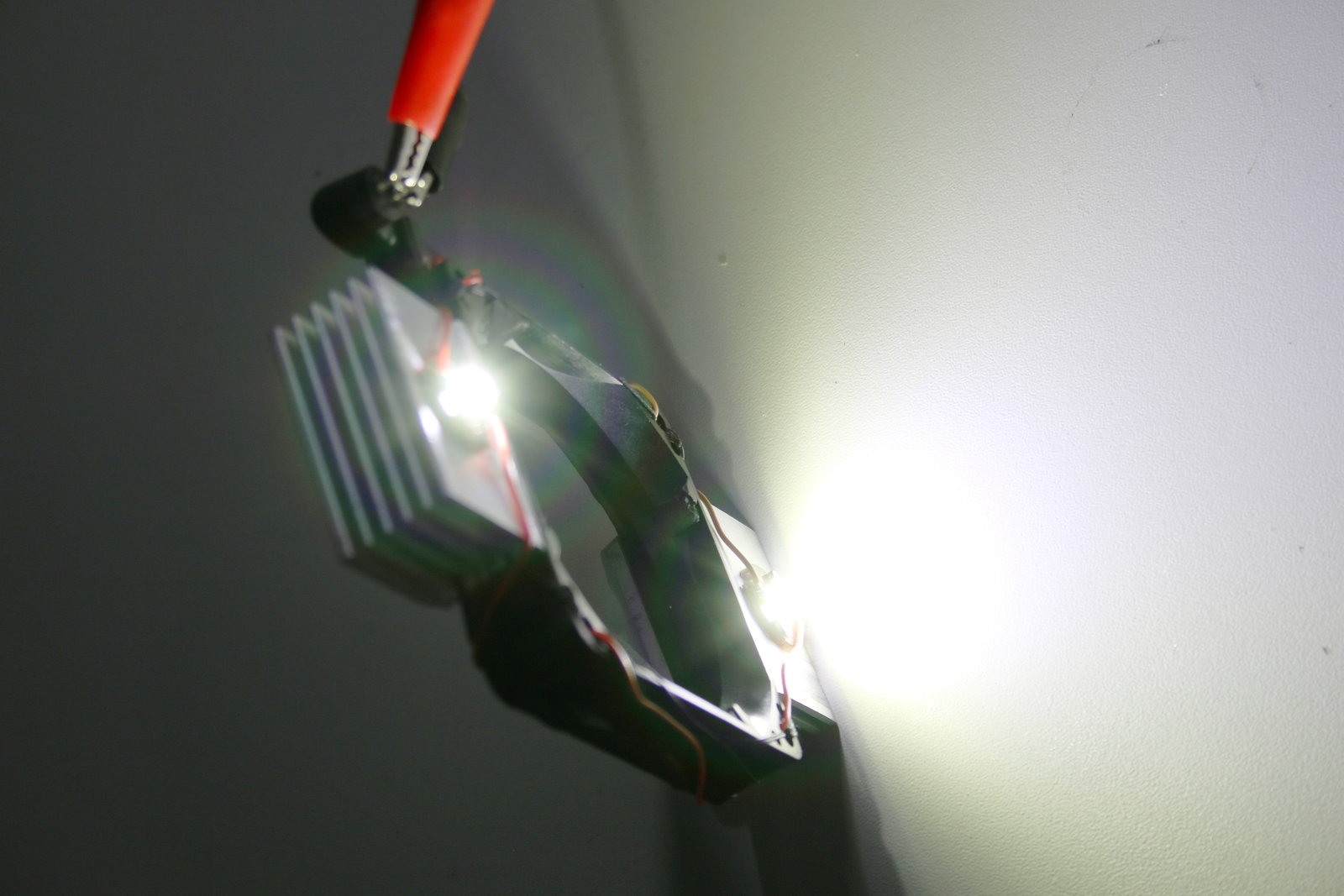 The last step is to wrap the fan frame tightly with black insulating tape. Two velcro straps on opposite sides will then hold the frame on the objective of my stereo microscope without scratching its coating. 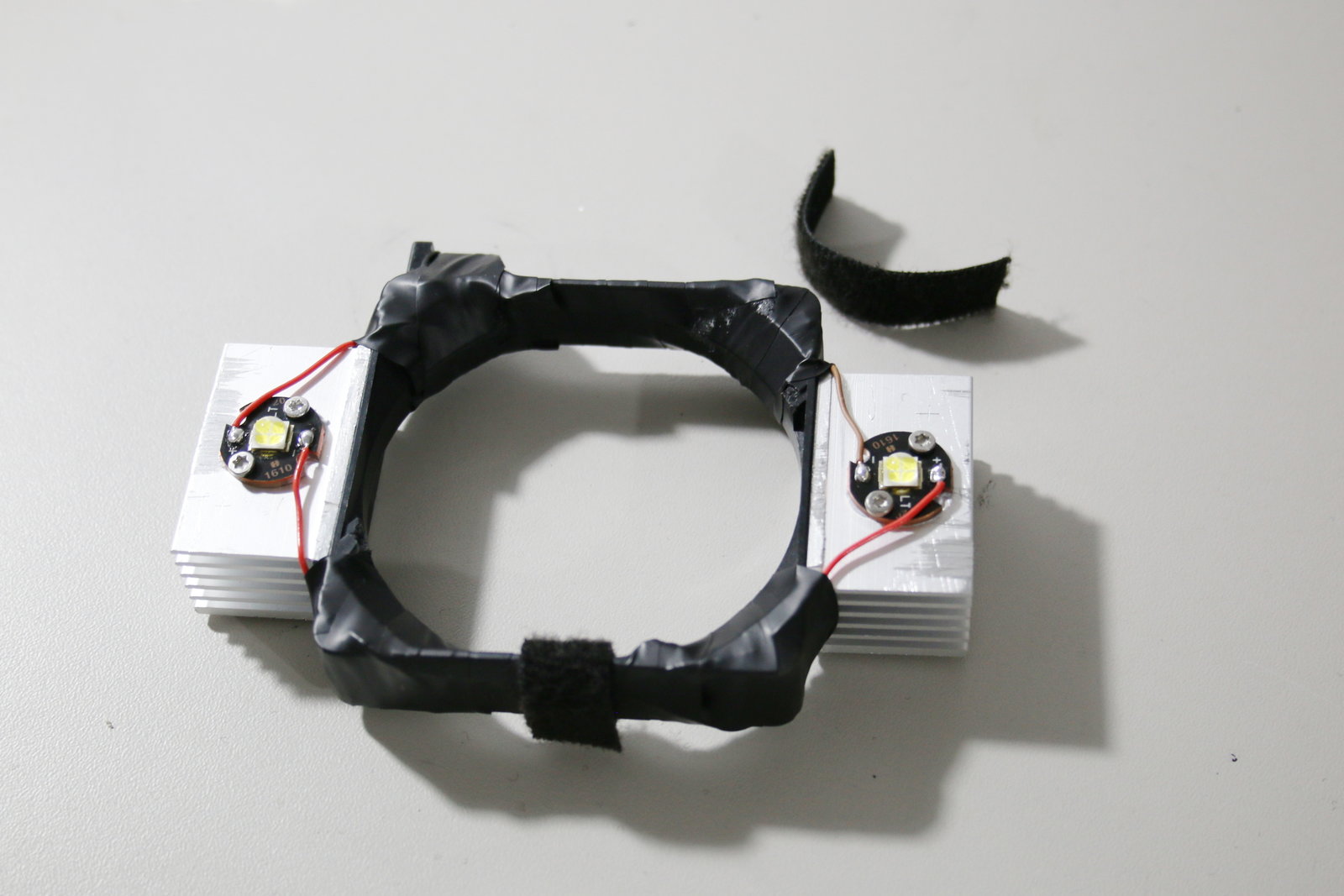 Of course it is also possible to build this light source with Cree XM-L2 LEDs which are also superbright (see next photograph with XM-L2s on the left, XHP50s on the right).

Remember that it is best to use a regulated power supply or an external LED driver (-> ebay) to operate the LEDs. As for the XHP50 which seems to be a very tough beast of an LED (at least according to its specs), I have omitted an additional series resistance and I use them directly on a stabilized 12 volts power supply at a mere 1000 milliamps which still brings plenty of light. 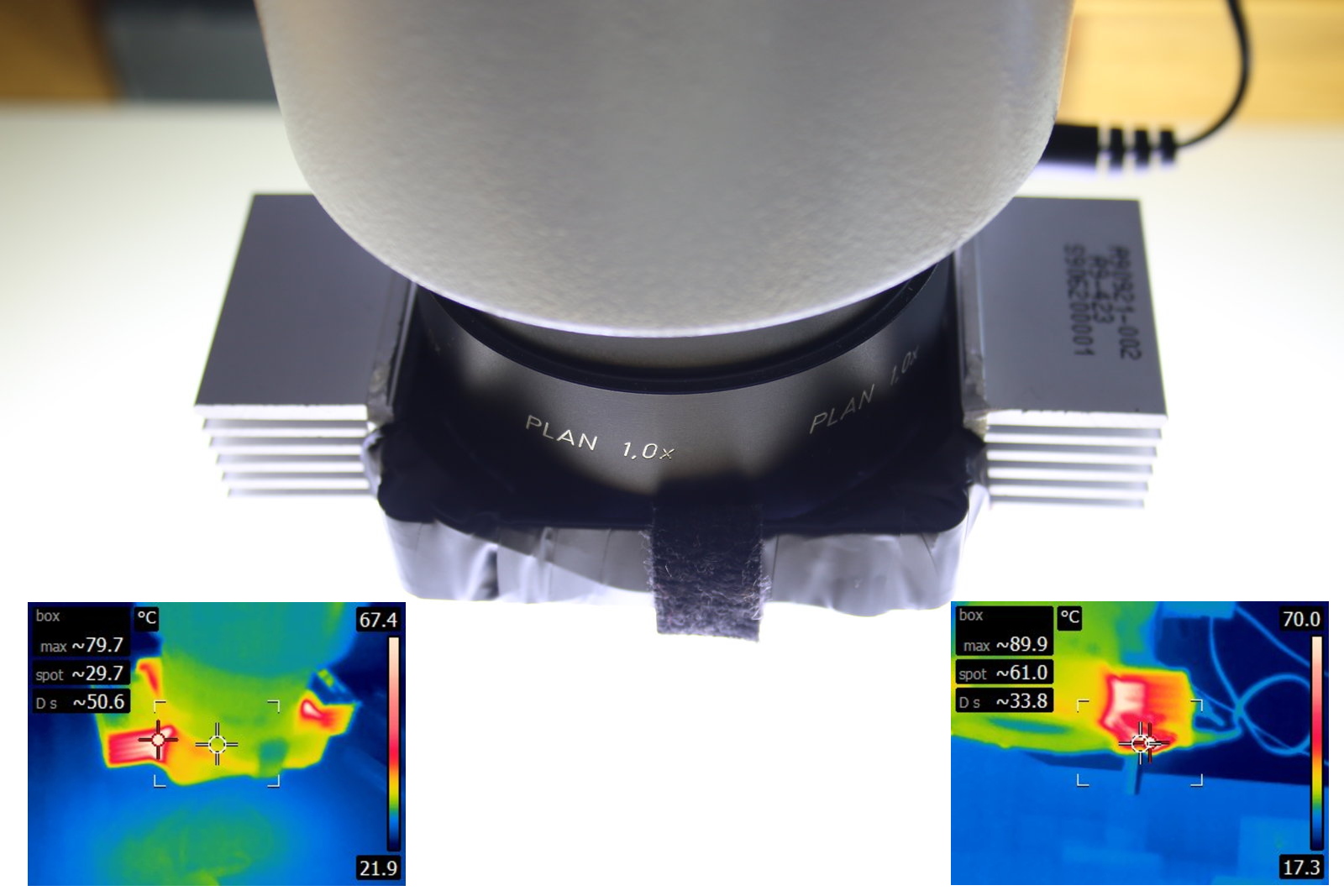 Here, a thermal image after some hours of use - with more than 80 °C at a 21 °C room temperature the lighting gets somewhat too hot for accidental finger contact (N.b.: According to its datasheet the XHP50 could actually deal well with this temperature!): 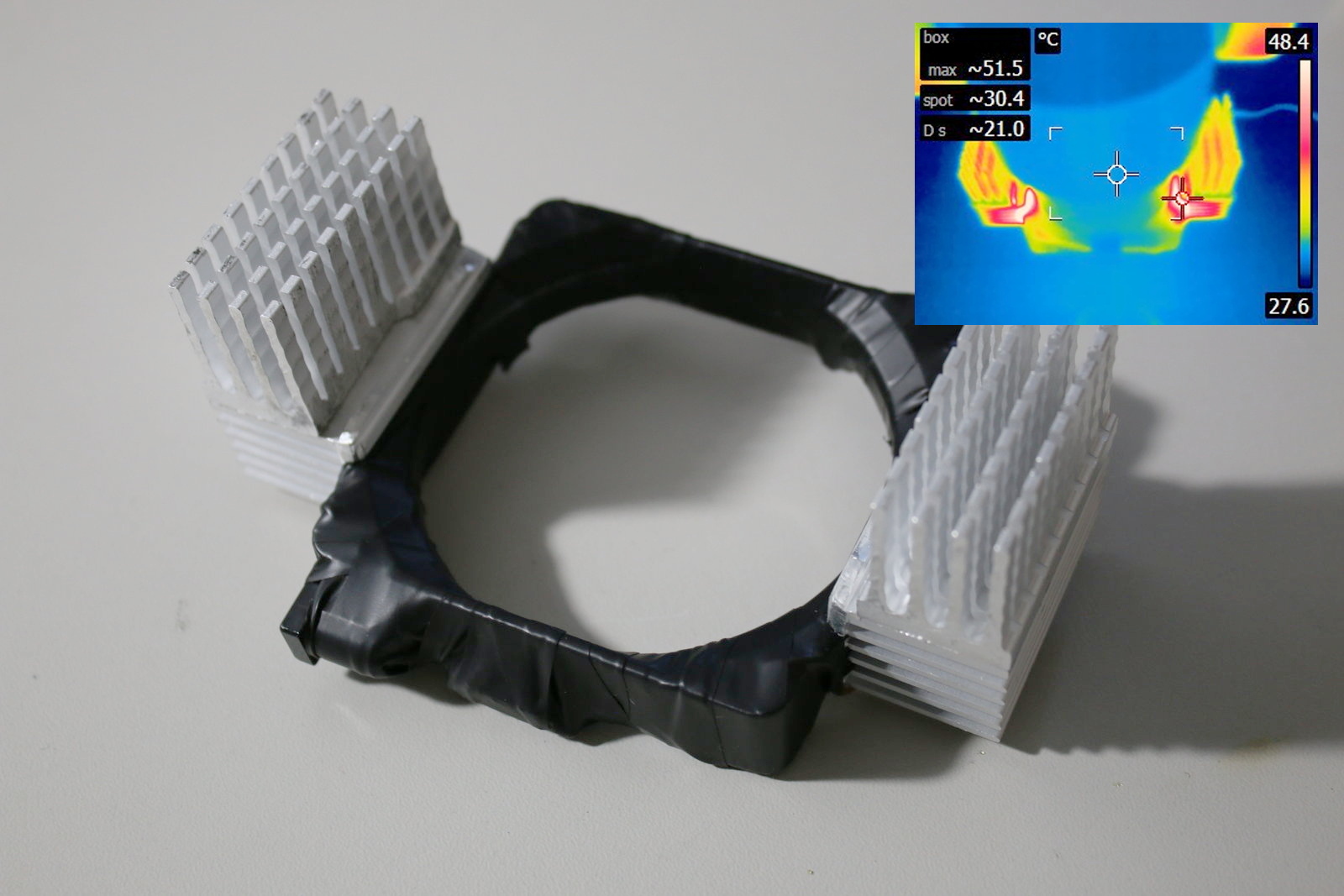 With additional heatsinks glued to the original ones, temperatures stay significantly lower. 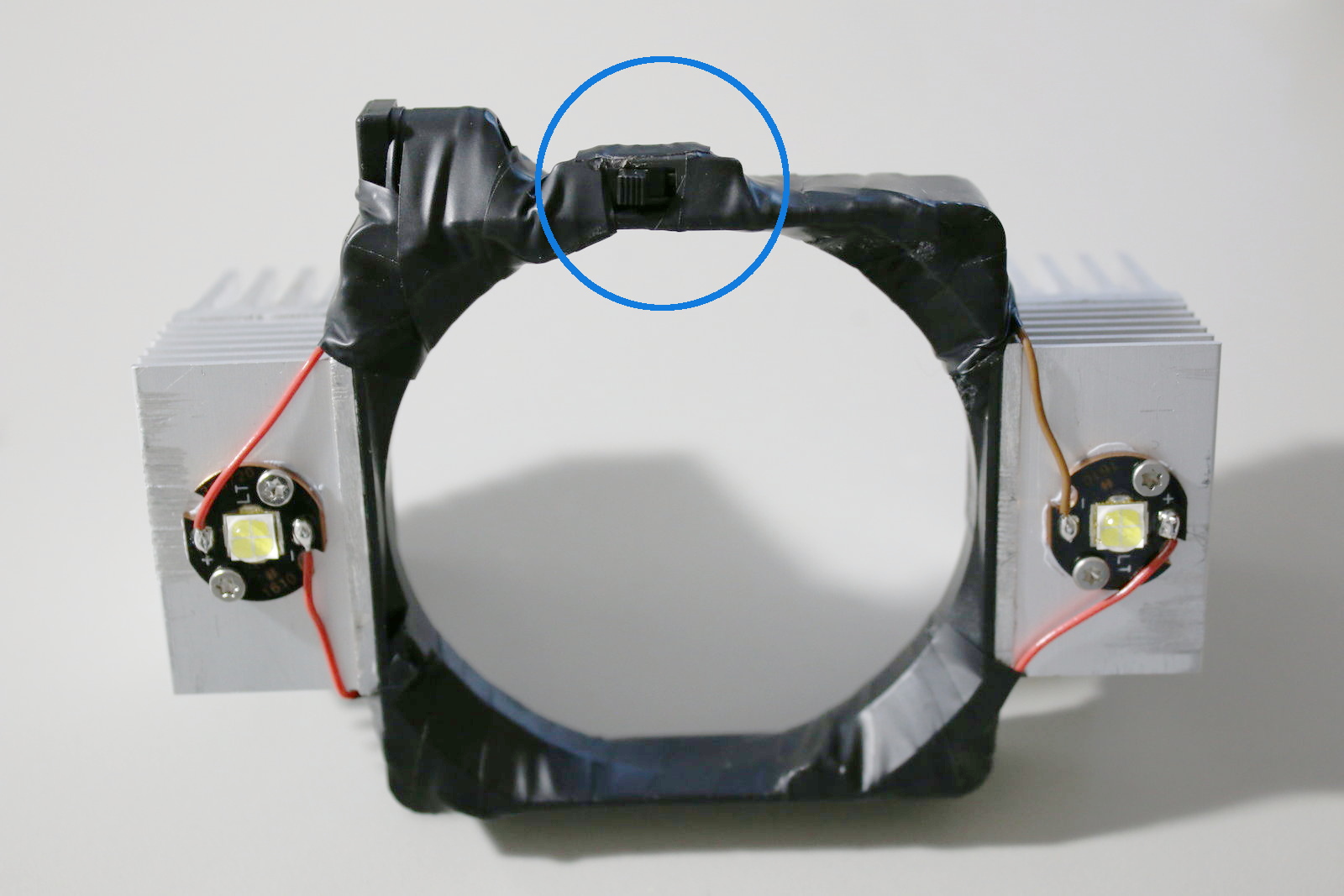 In case the M8´s coaxial lighting needs to be used, I have added a small switch (blue circle) that allows to turn off the XHP50 lighting.