I recently had the opportunity to test an Olympus SZH stereo microscope. So here is a litte inside review (pictures might be somewhat dull due to the lack of better lighting conditions on location, sorry). 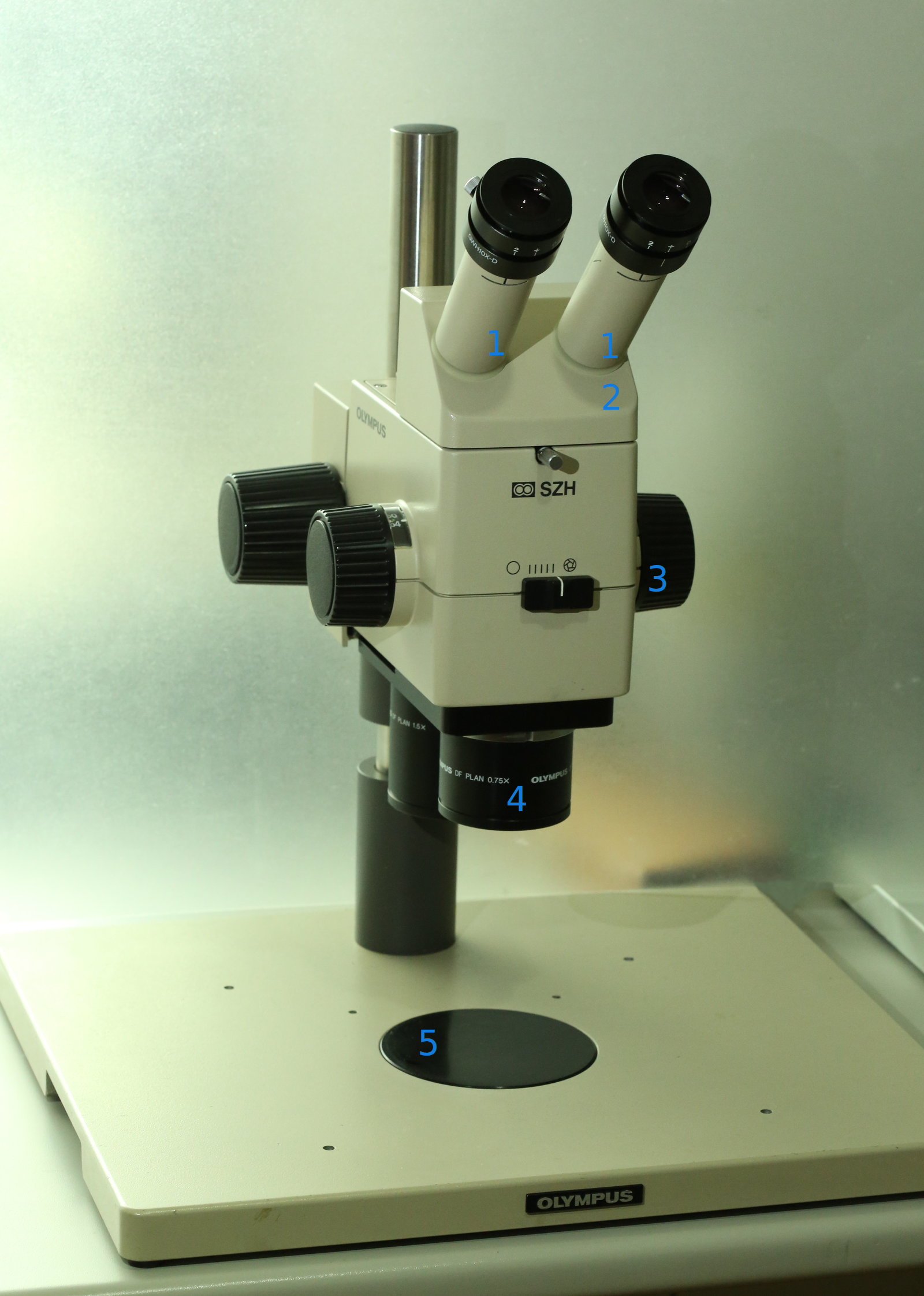 The design is functional, modular and very boxy - it´s clearly a 1980s product when it was Olympus´ flagship model.

The binocular head (2) with the eyepiece tubes (1). 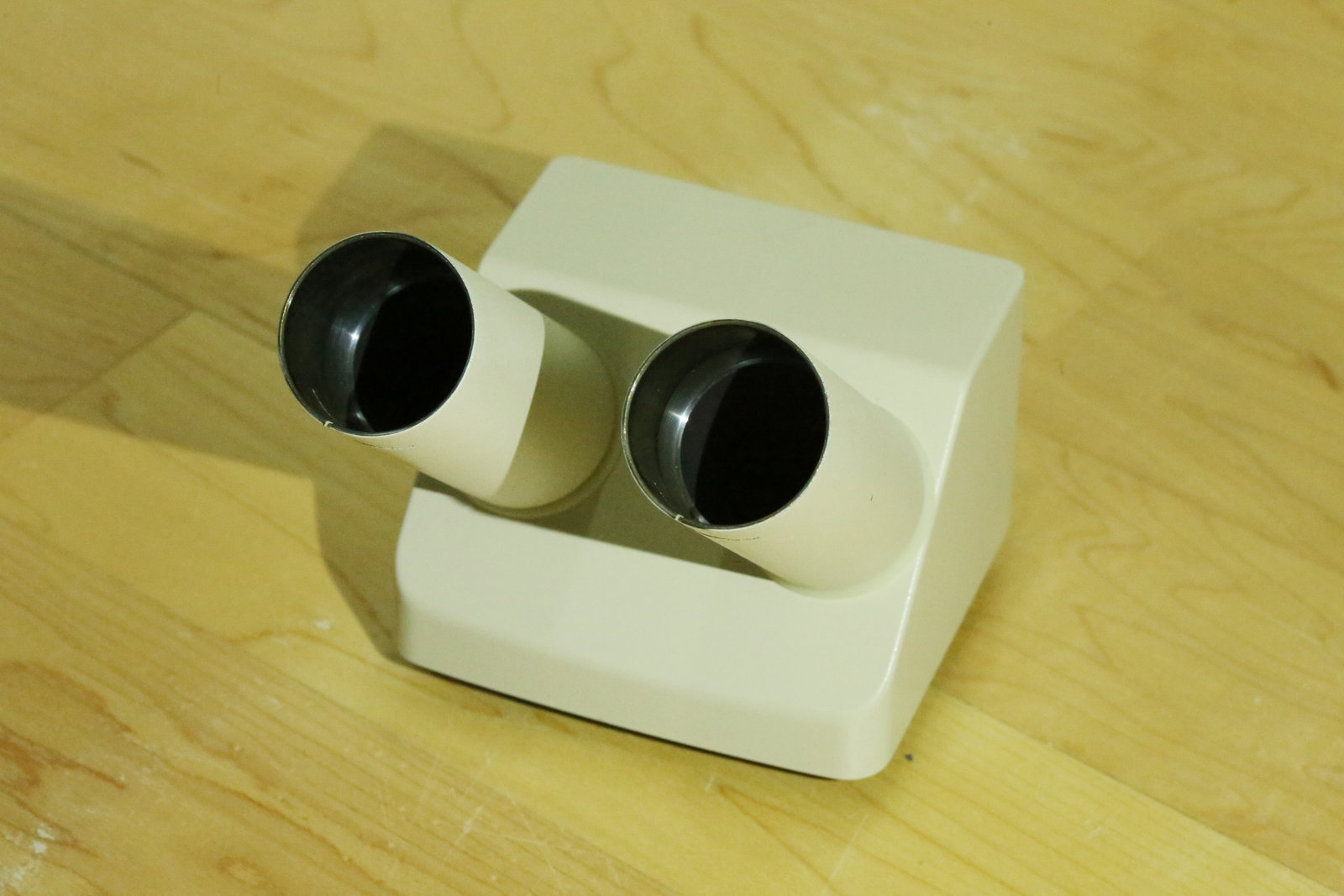 The opened binocular tube reveals a solid built quality. The two unscrewed eyepiece tubes have lenses on their base. 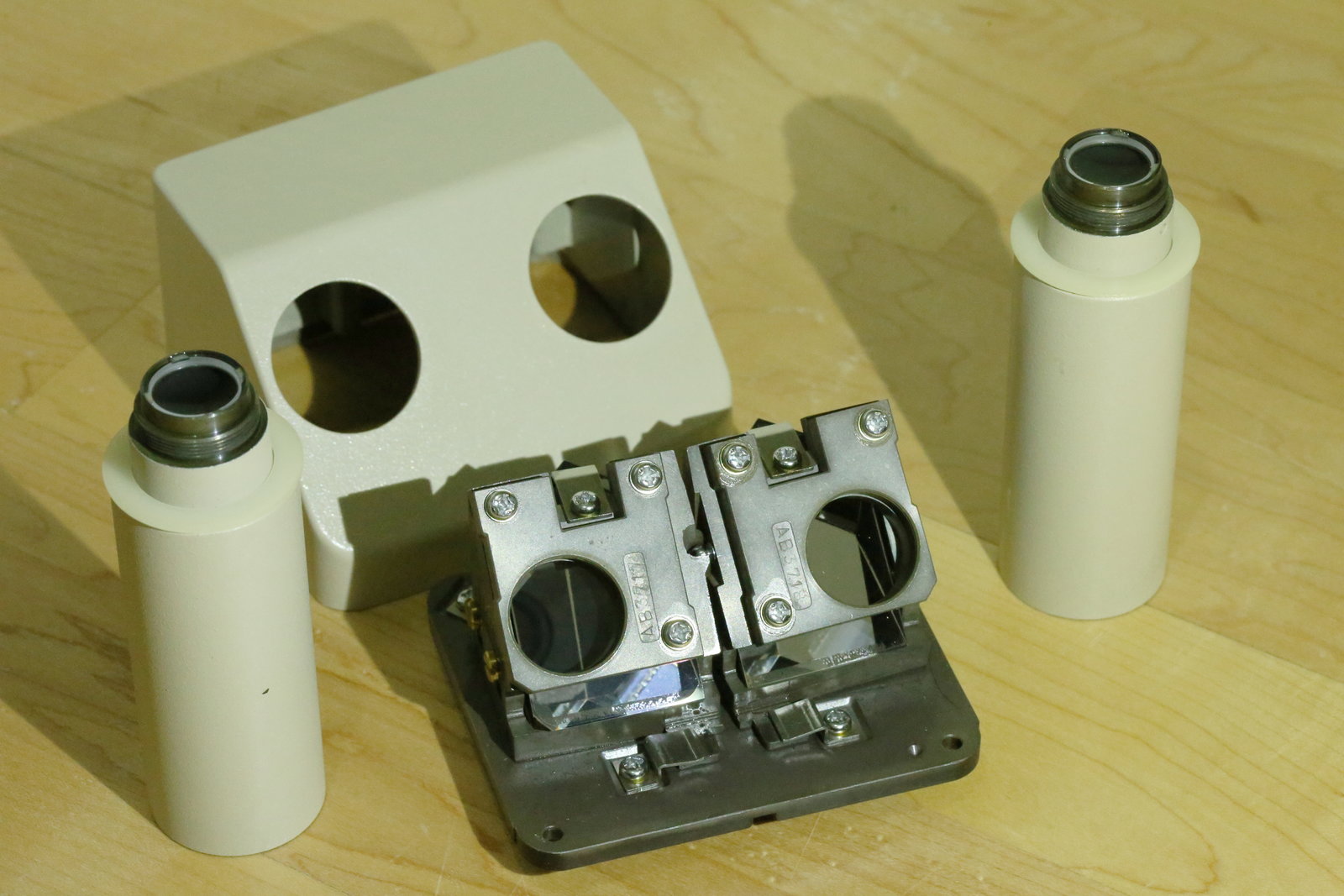 The prisms seen from behind. 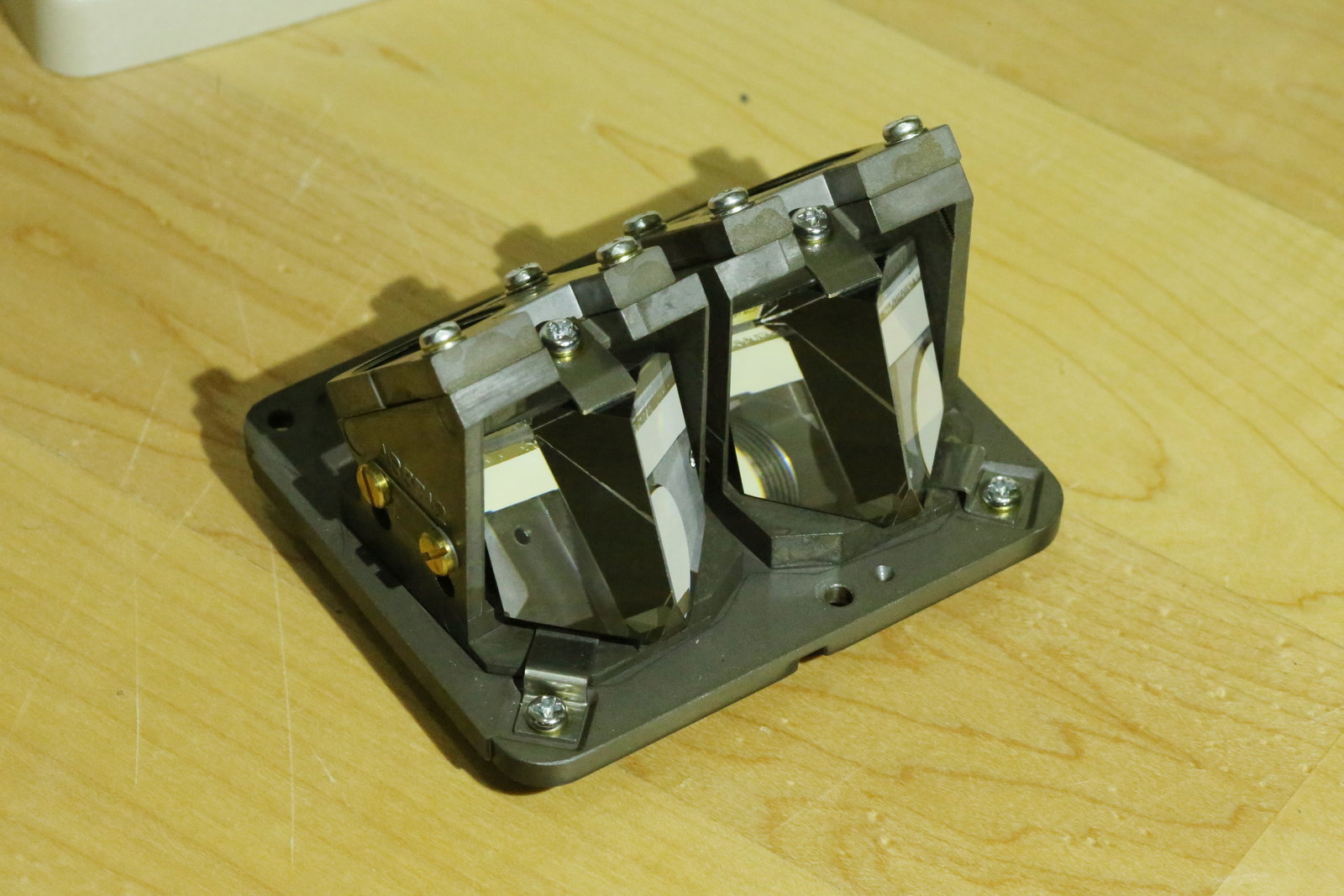 To allow for adjustment of the eye distance, the prism holders are movably mounted, sliding on a film of grease. 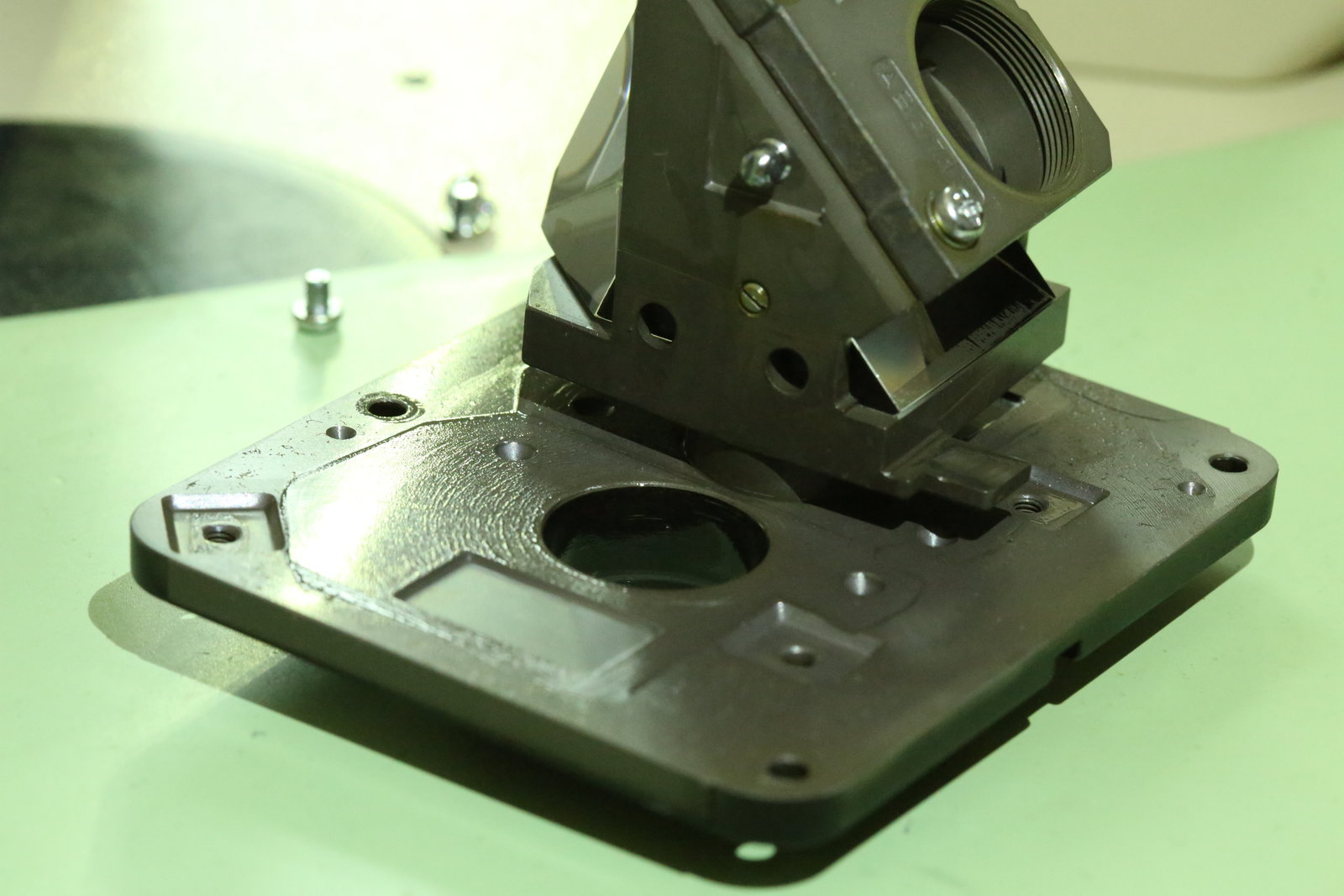 A ballhead (unscrewable in case of a damage!) provides the interconnection between the two prism holders. 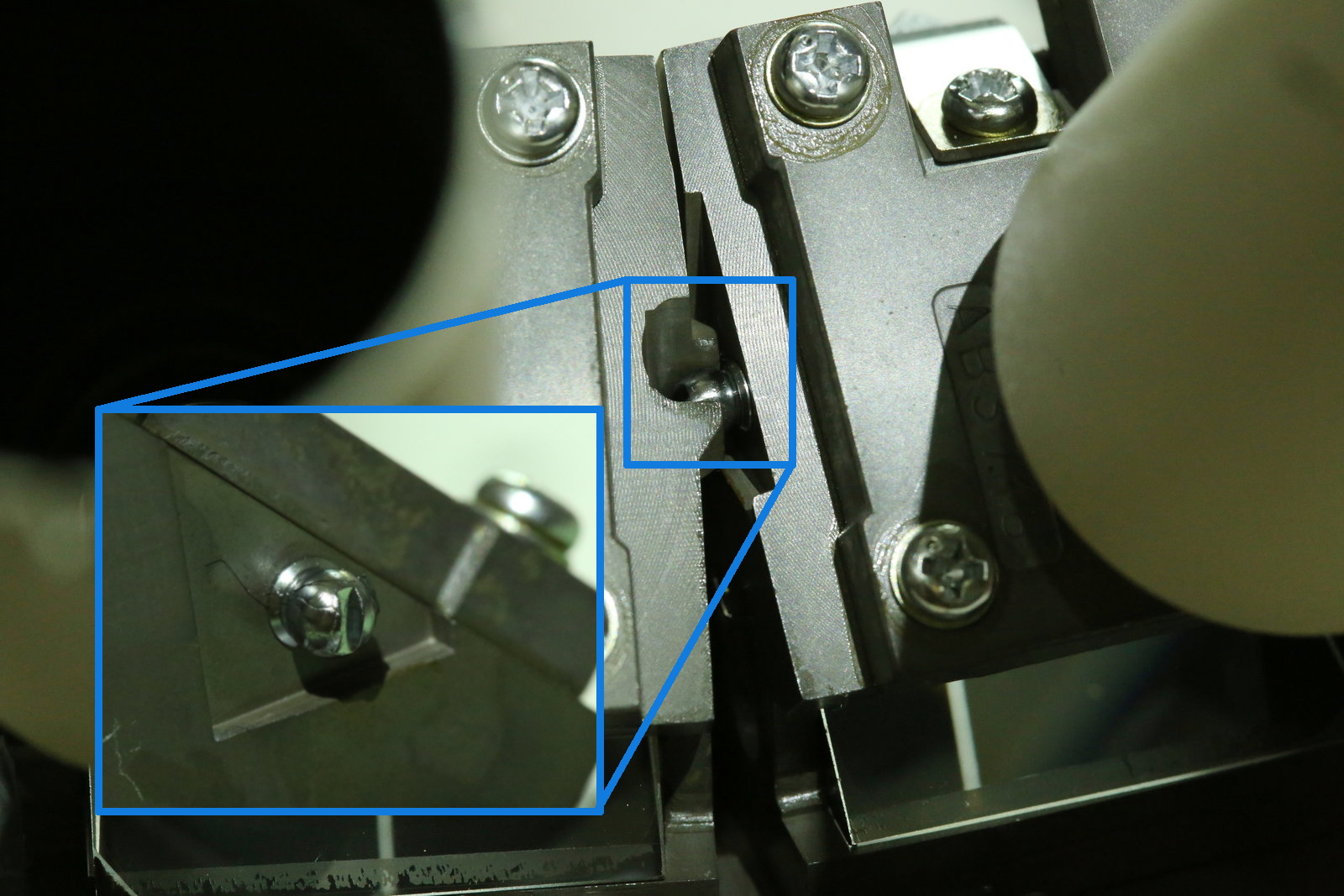 The SZH-ZB microscope body (3) features the focus (A) and zoom knobs (B) with magnification scales an both sides (C) and an aperture slider (D) to adjust the depth of field (especially useful with the SZH-PT phototube which I might present in a future article). 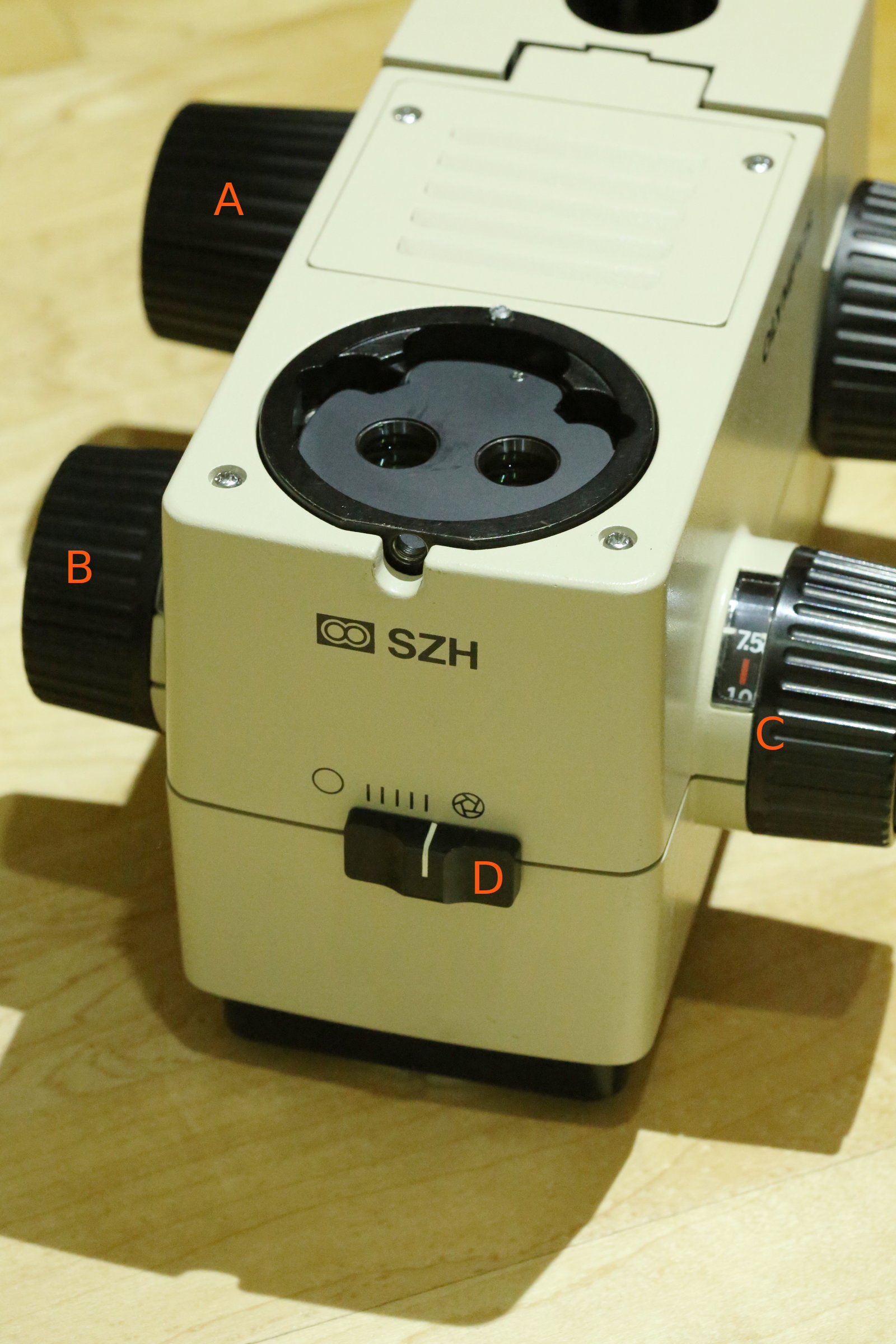 On its underside the SZH-ZB can be equipped with the SZH-RE2 double revolving nosepiece to allow for the quick change between two objectives (this part also shows some attention to detail). 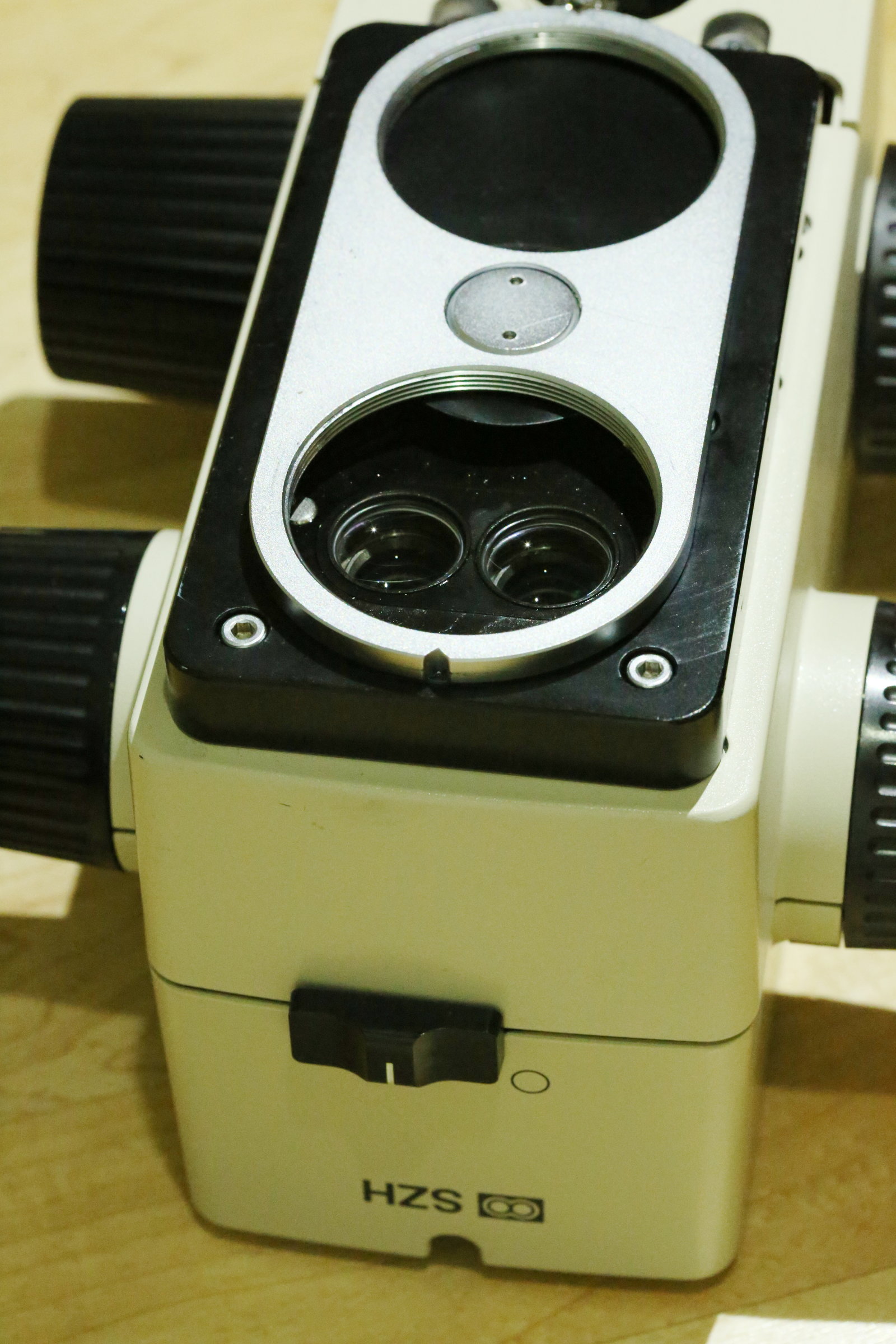 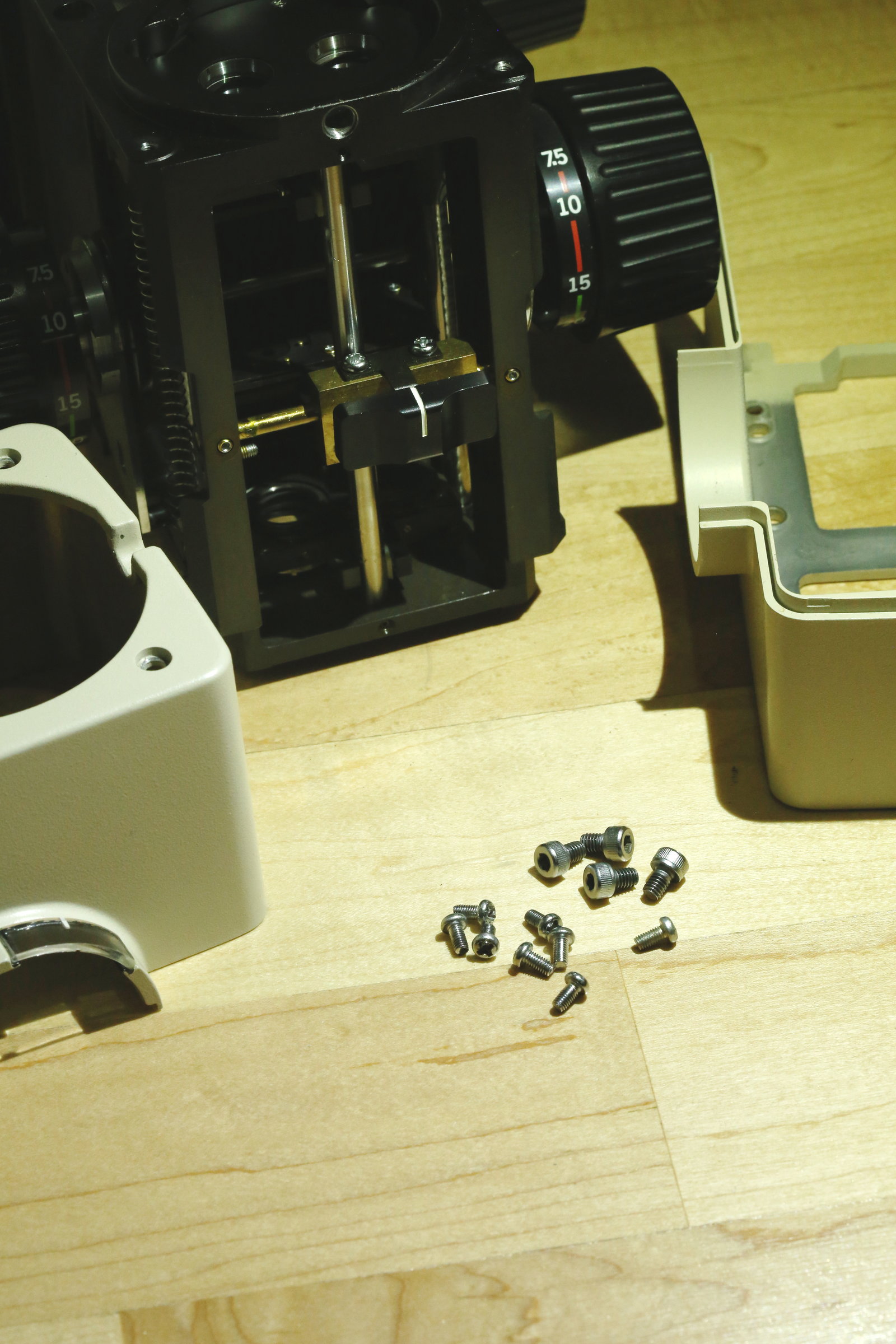 Two types of screws hold the upper and lower SZH-ZB case covers and the SZH-RE2 in place.

Inside, the SZH stays true to its boxy and rock solid, metal design. The zoom action works like in other common-main-objective (CMO) microscopes (e.g. Wild M8), with a 8.5:1 zoom ratio. There is, however, no "click-stop" that gives tactile / acoustic feedback between the various levels of magnification. The SZH´s successor, the SZH10 from the 1990s, has this function, just as it has coarse AND fine focusing knobs and a refined focus drive pinion which was probably the major flaw of the SZH (shown in detail on xiphmont´s great blog).

The iris diaphragm slider in action. 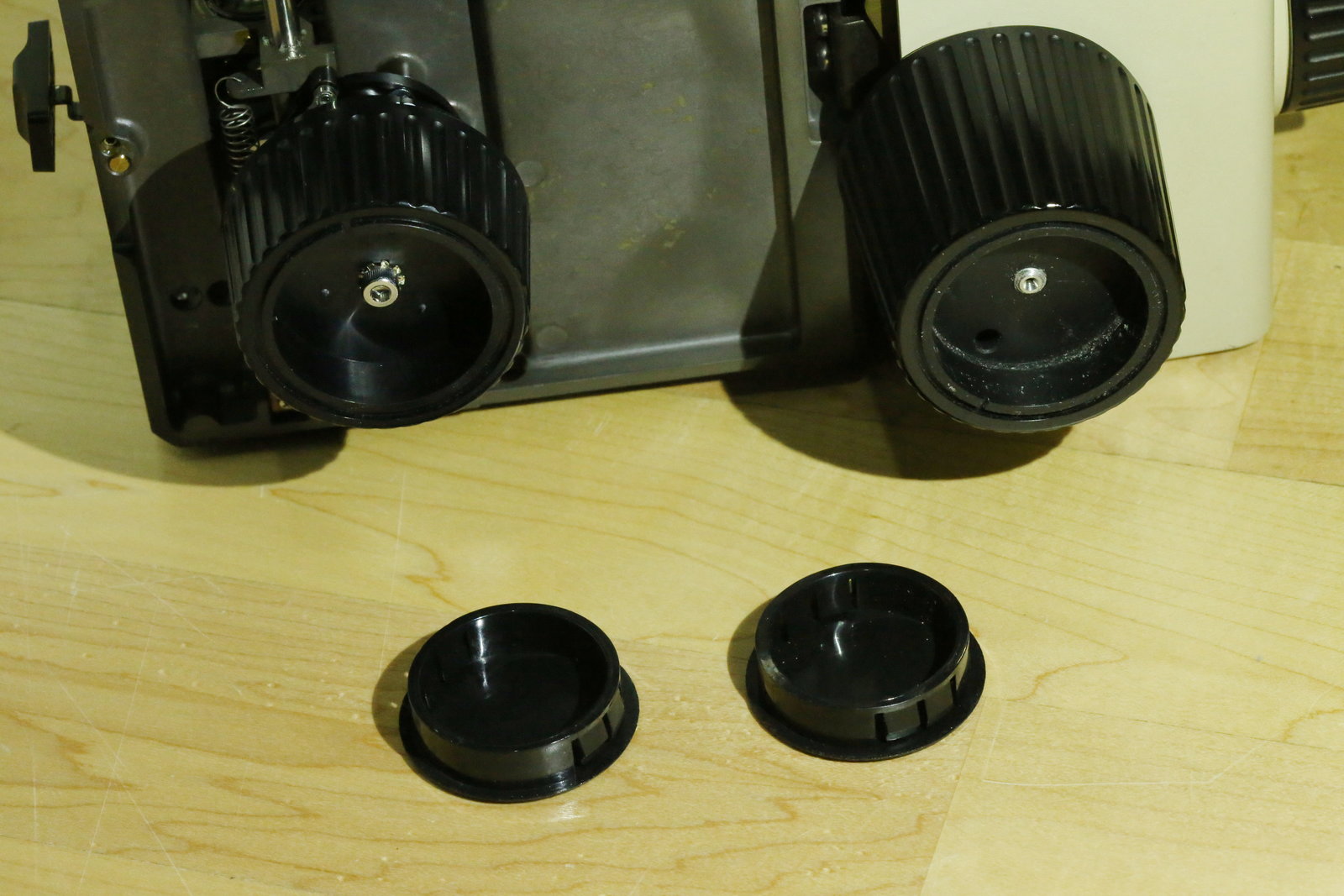 The zoom and focus knobs with their covers removed. An additional feature of the focus knobs is that they can be turned in opposite directions to adjust for the tension of the focusing action (beware, the objective lens can get damaged when the tension is too low and the whole body slides down in an uncontrolled fashion...). On the back of the SZH-ZB we find another knob to screw the microscope tightly to its base stand (5): 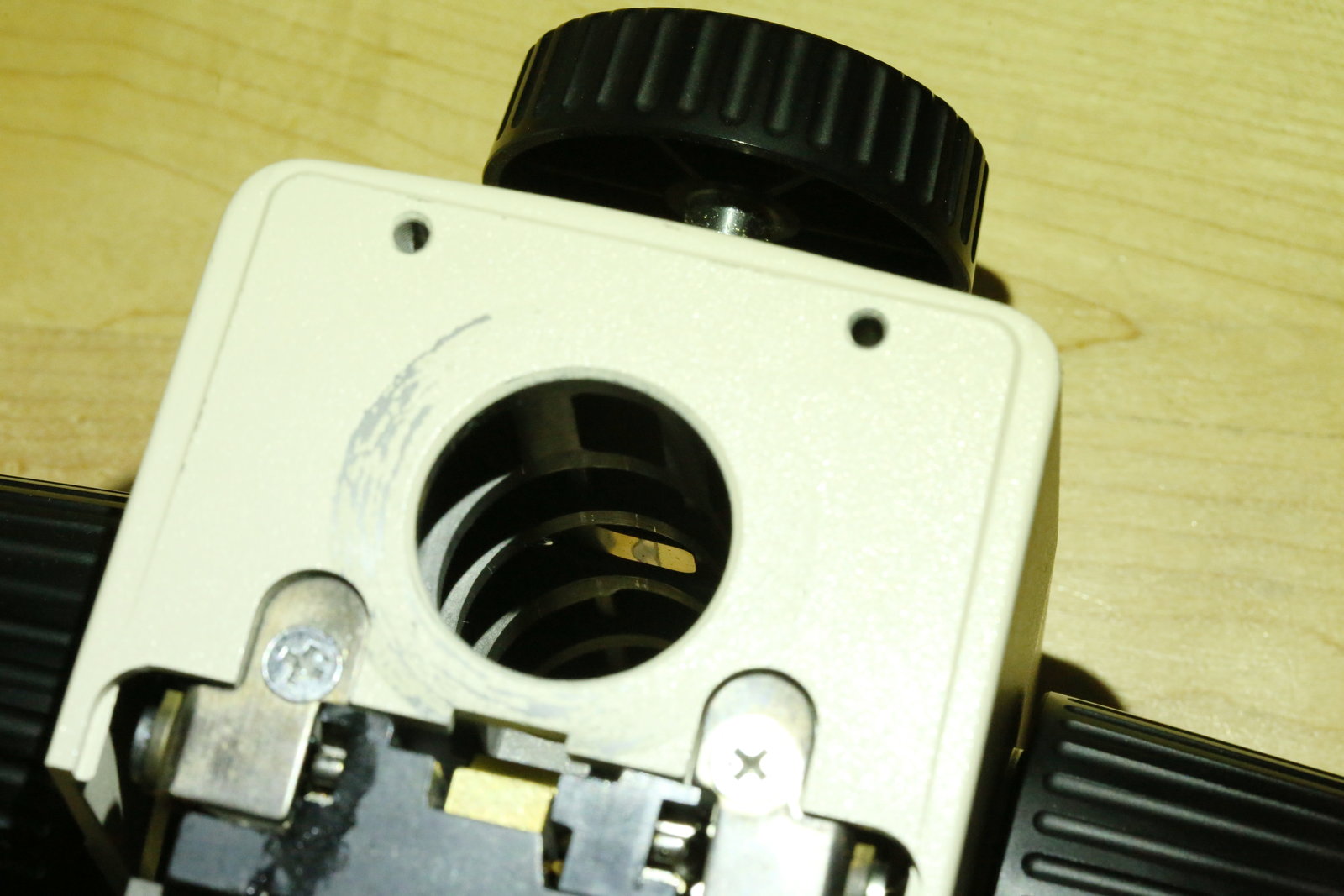 Over the years, Olympus released various objectives for its CMO microscopes and many are up- and downwards compatible. For example SZH objectives also work with most of the later SZH10 and 1st gen. SZX microscopes and vice versa (at least as long as the thread diameter is roughly 54 mm, the 65 mm SDF objectives will not fit!). Three of them are shown here - a 0.75x, a 1x "Plapo" and a 1.5x "Plan" objective: 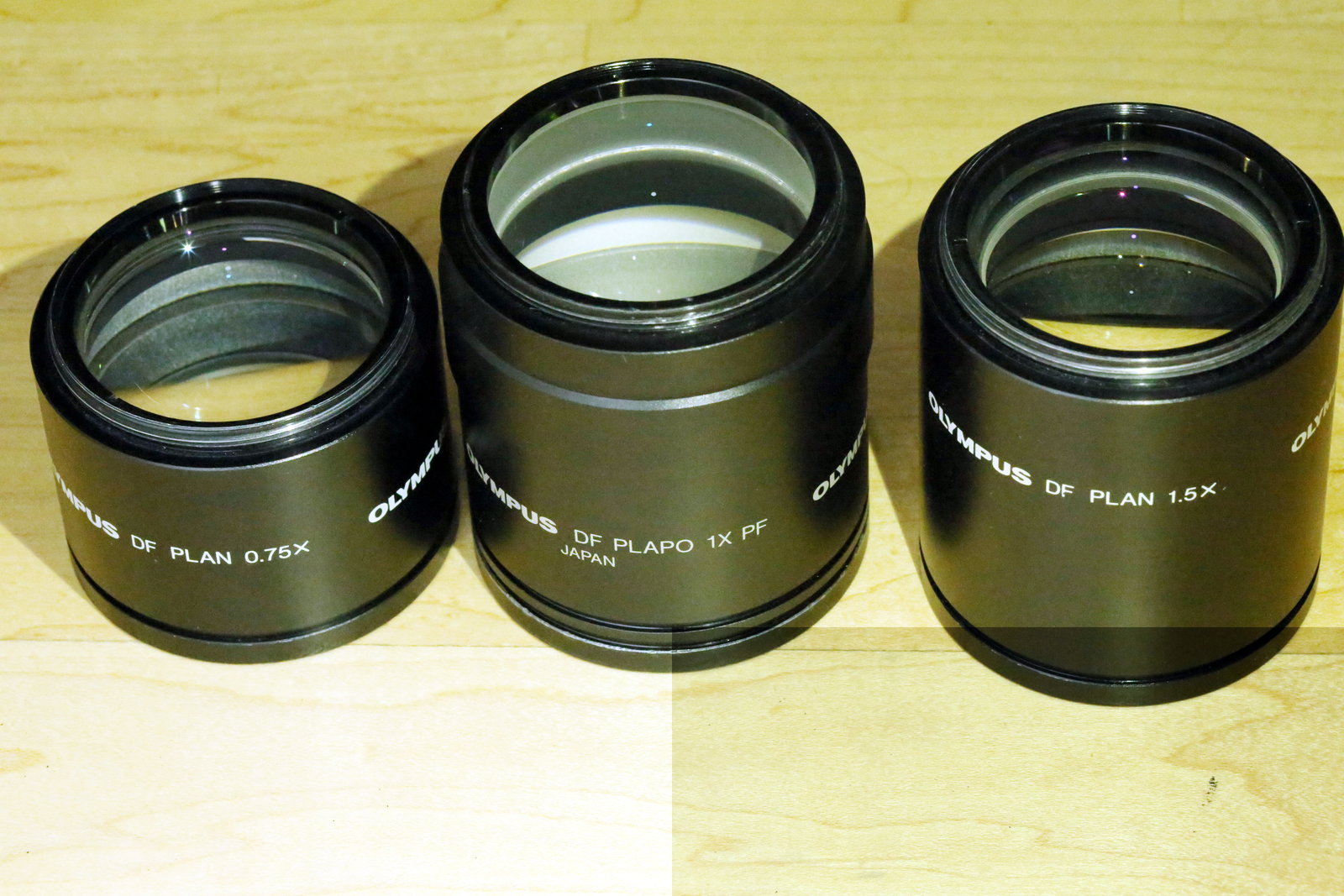 The best objectives you can get - both for viewing and for photographic documentation - are the plan-apochromats, i.e. those labelled with "Plapo". Two can be combined at a time on the SZH-RE2: 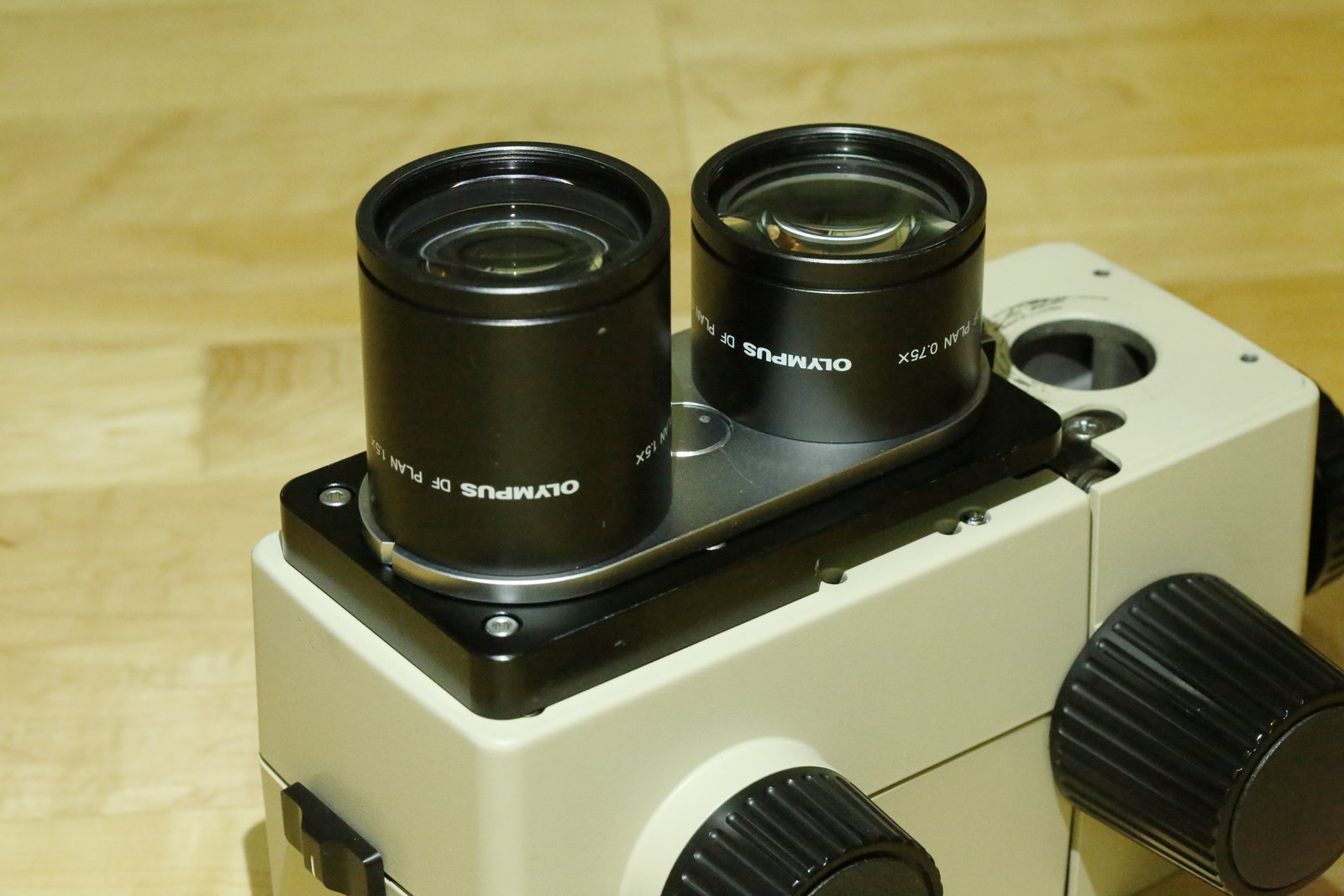 Despite its error-prone focus mechanism, the SZH is a well-engineered stereo microscope with a great cost-benefit ratio and good repairability.

Combined with "Plapo" objectives, its optical quality ranges clearly above older models (e.g. the Wild M8, which is otherwise better from a mechanical point of view) but below later high-end CMO microscopes from Olympus (SZX series), Leica (MZ12.5) or Zeiss (Discovery series).