The Panasonic DMC-TZ10 is a good camera for various tasks (e.g. for macrophotography) and its overall construction is pretty good (more on that later). However, just as many other comparable compact cameras today, it is not really dust-proof. After having used it for some time, many fine dust particles had found their way into the multi-lens objective: 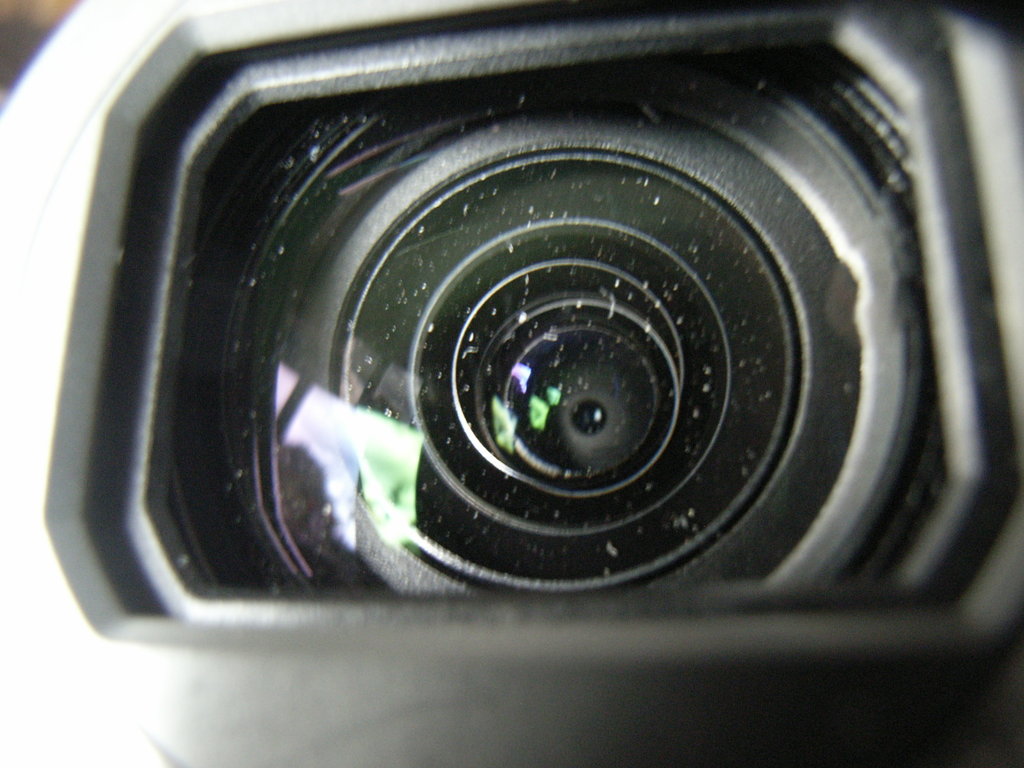 Getting these particles out requires to disassemble the camera - a procedure which I documented here (this HowTo can be applied to many other compact cameras, too - actually it is almost always the same =-).

At first, I removed all of the black screws which held the case covers in place (THANKS Panasonic for using only ONE type of screw here - this makes re-assembly pretty easy - take care not to damage the flex cables for the LCD screen, if you have to disassemble the same type of camera!) 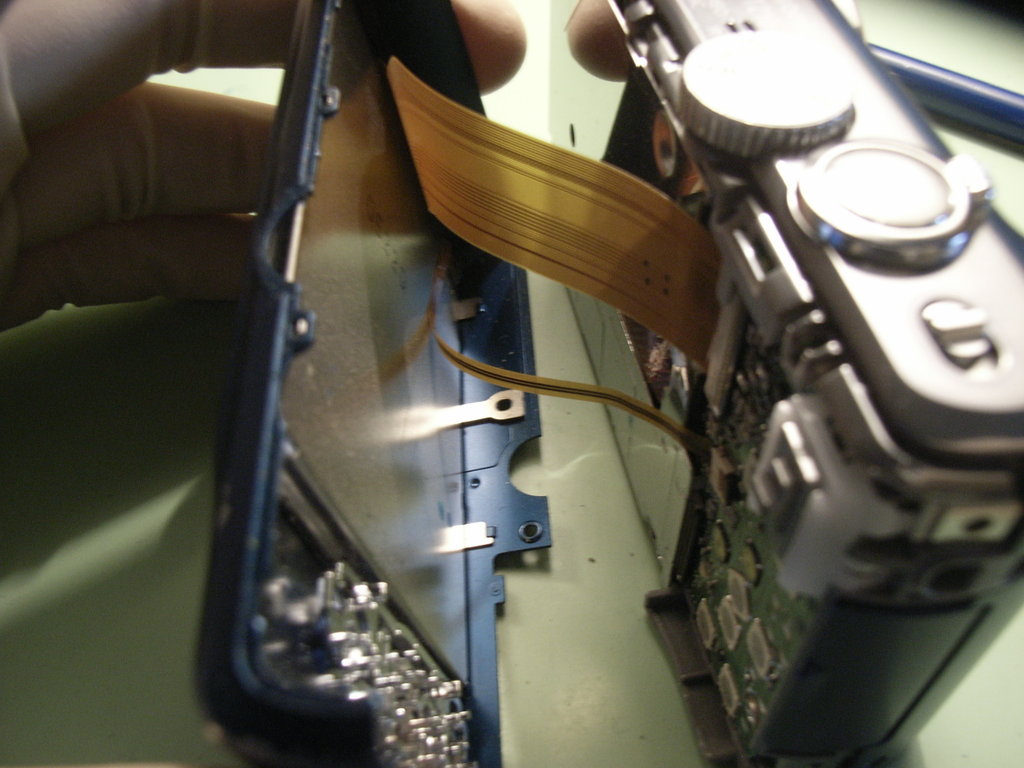 Next, some info regarding dust between the screen protector and the LCD:

The screen itself can be flipped out of the caseback like this... 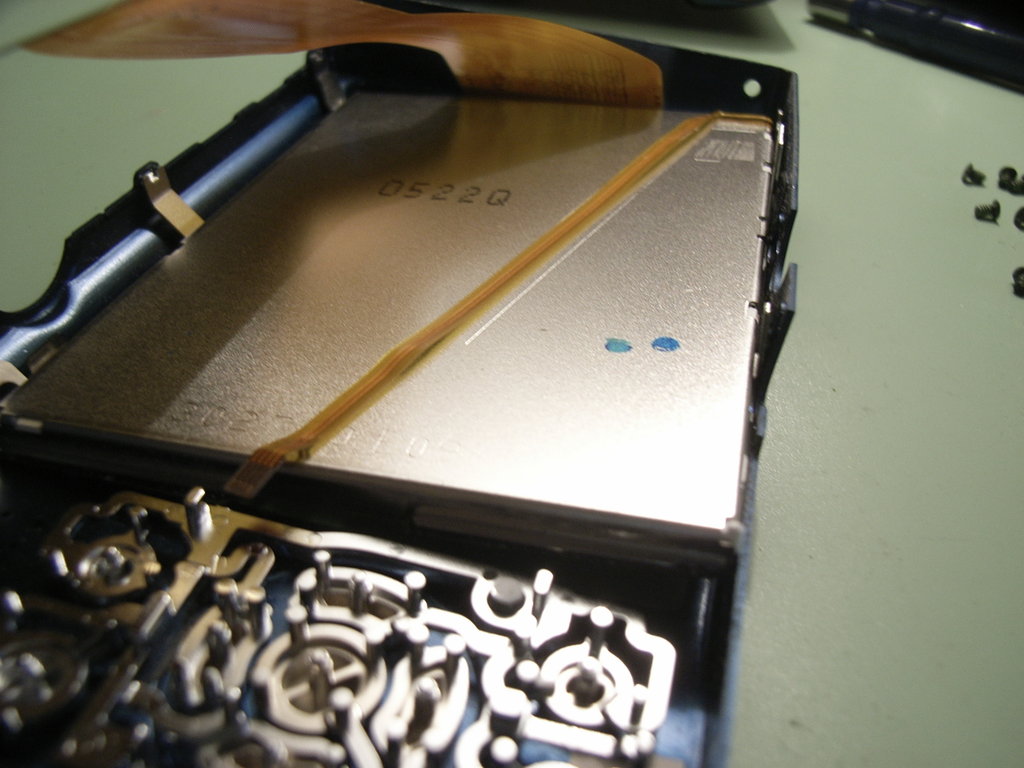 ...and then the screen protector can be removed: 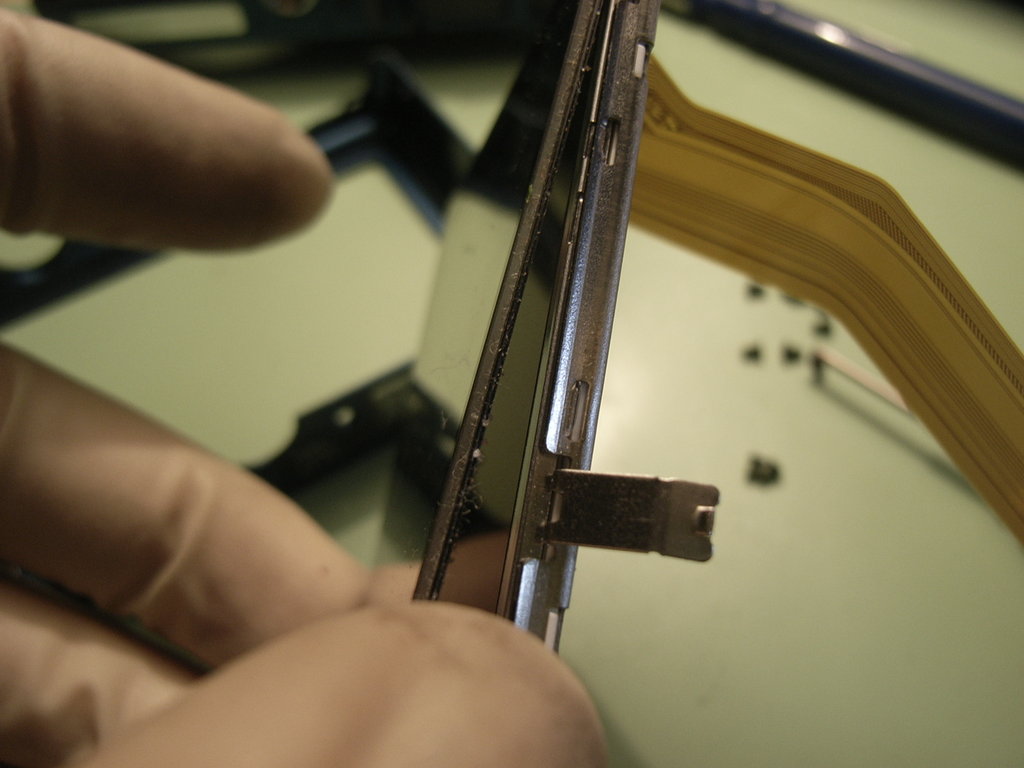 Now you can try to clean the screen. I wrote "try", because it proved futile in this case - at least regarding particles like those that you can see in the photo below (they appeared to be rather a problem of the coating of the LCD - maybe they were induced by pressure of the screen protector against the LCD?). 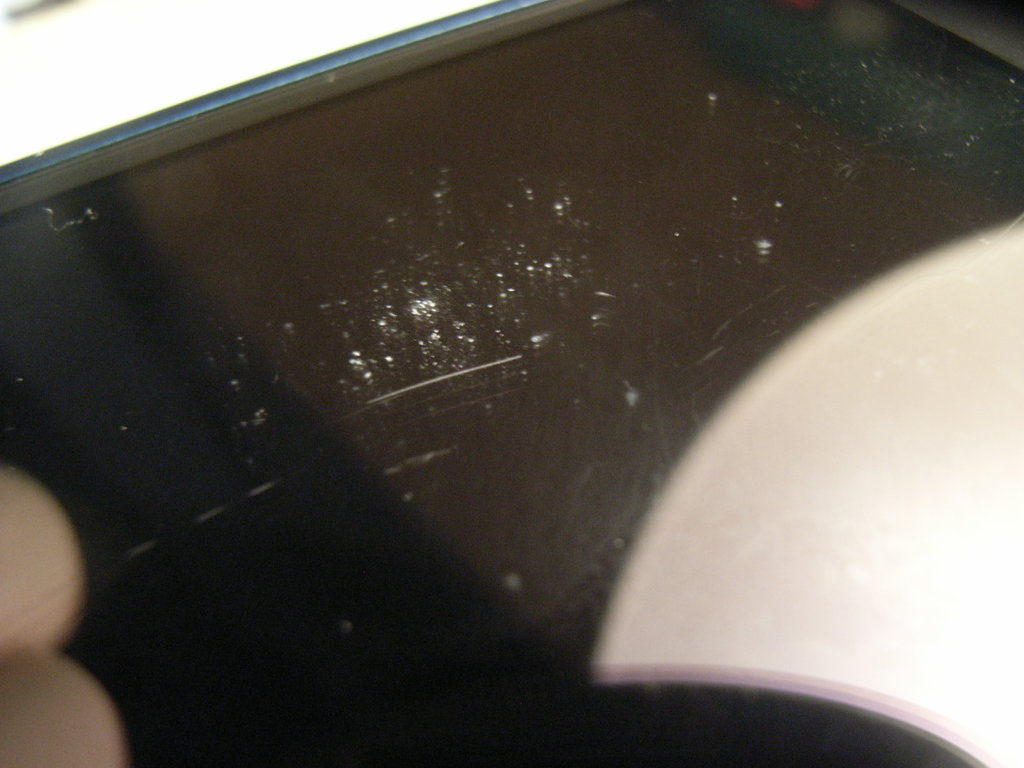 Back to the lens cleaning. Here I have already removed the protective metal cover to get to the objective - just three screws are necessary here - good. 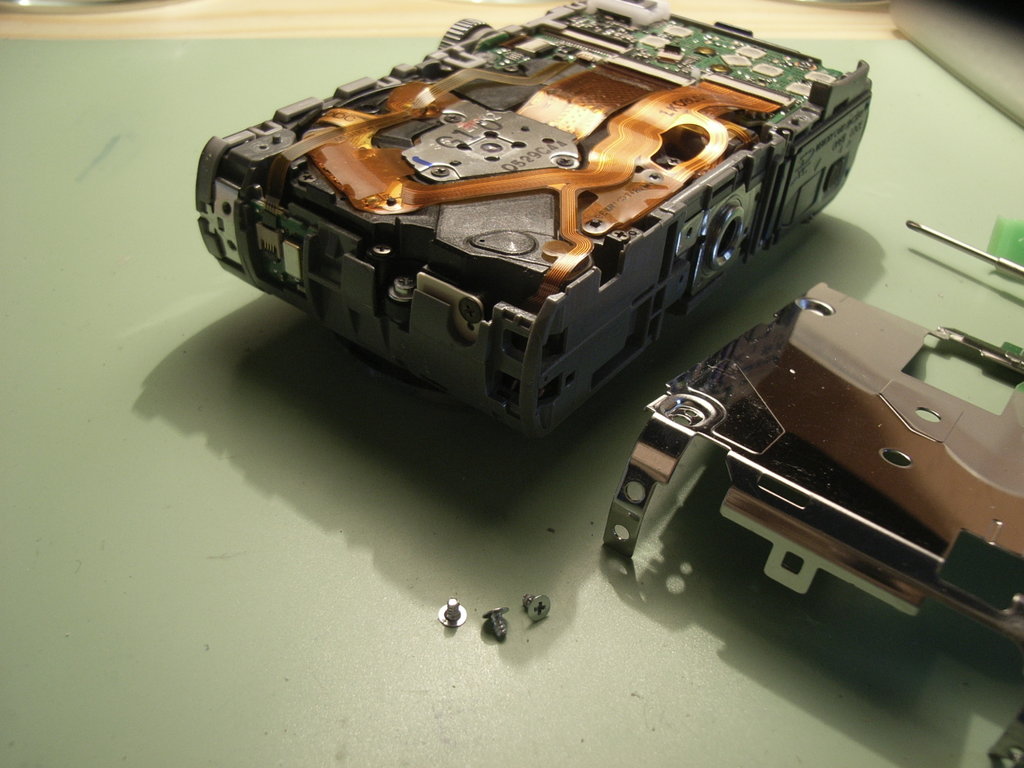 To get the objective out - honestly, this is a great modulary construction here - I released the two flex cables and removed the three screws which hold the objective inside (do not forget to get the camera´s mounting piece out, too). 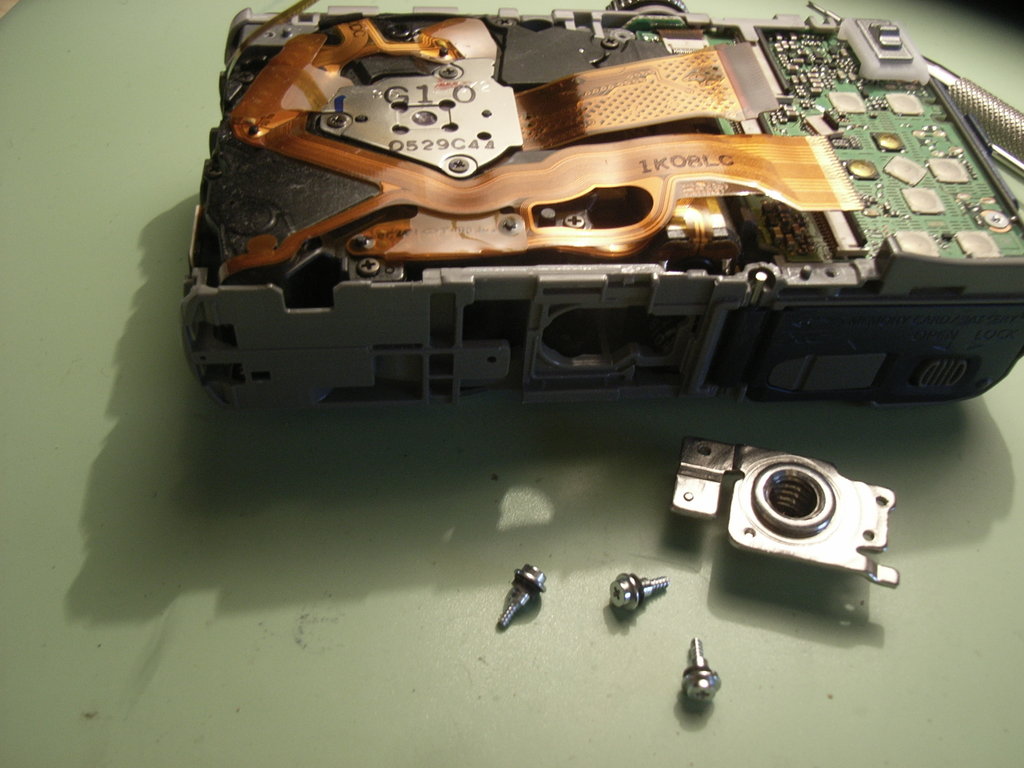 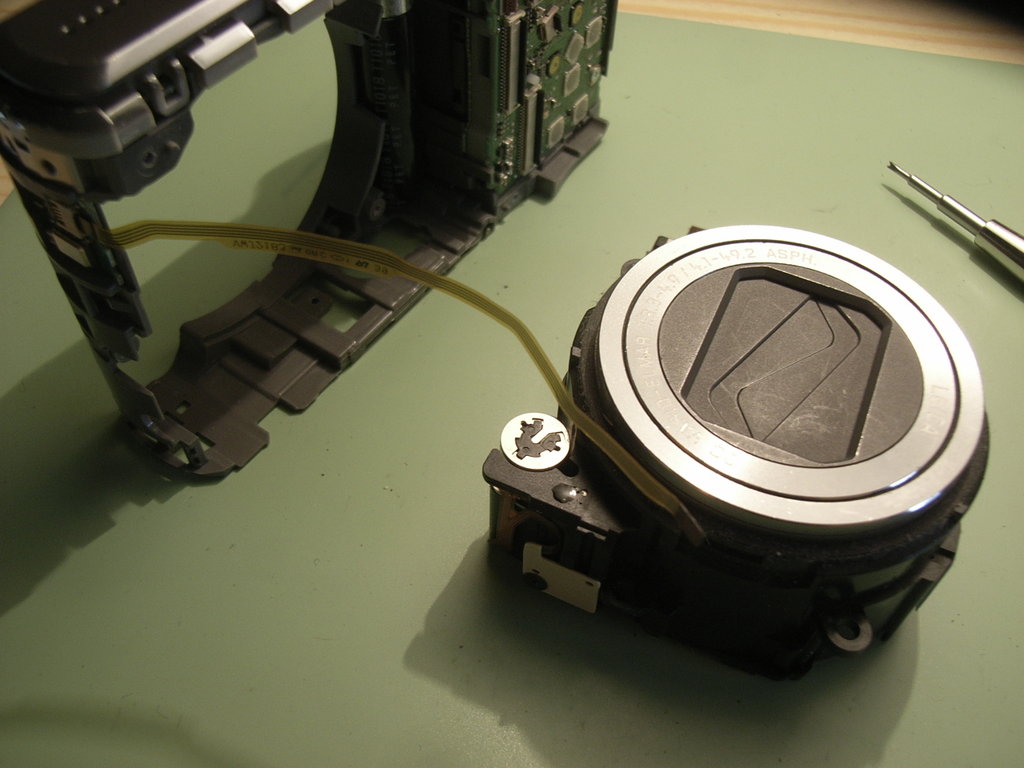 To get to the lens system, I removed all black screws on the back part of the objective, one silver screw near the smaller of the two focus drive motors and also a flat-headed screw which holds an optical sensor in place (blue circle). 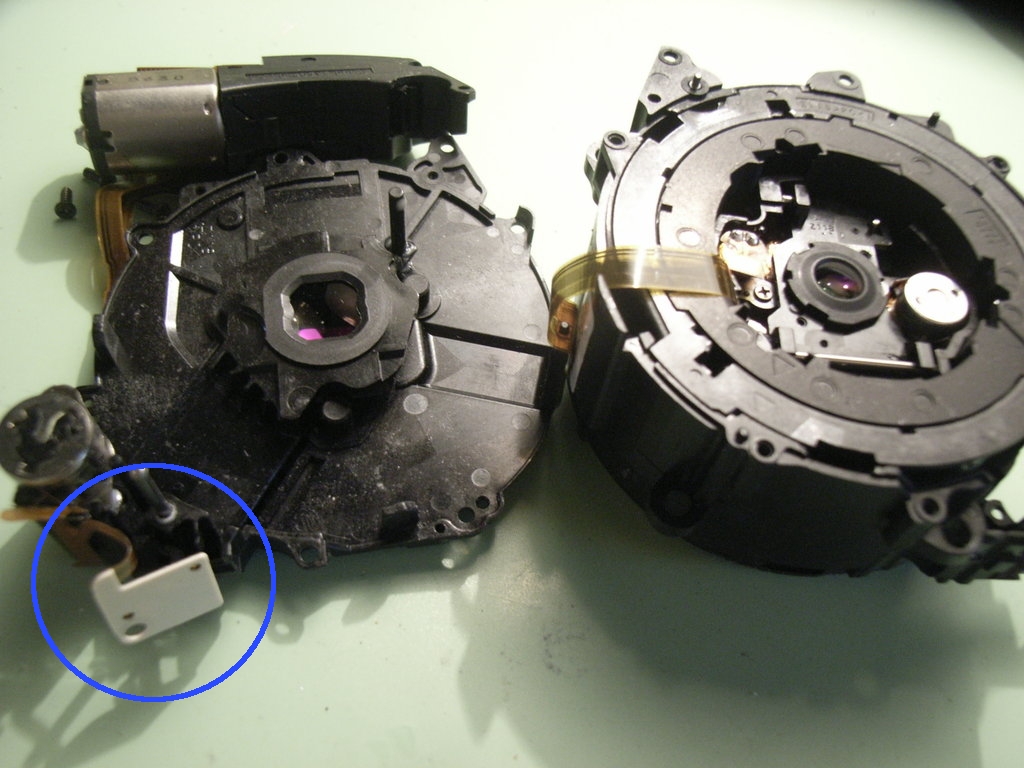 To remove the dust particles, I used a dust blower and some clean Rodico (google the term - a great cleaning substance that is normally used in horology).Every zoom objective consists of several sliding lens pieces nested within one another. Be extremely careful when you take those apart - the orientation of the pieces to each other is vital for a working camera focus.

After all particles were gone, re-assembly was a straight-forward task. So my final verdict this time: