Some time ago I wrote about a common issue with image sensors of affordable compact cameras. I described that the effect of severed wire bonds on image sensors can range from distorted colours to no image at all - i.e. a "black screen". Now today I got an an Olympus µ760 (mjuhh =-) camera with the latter fault - look here: 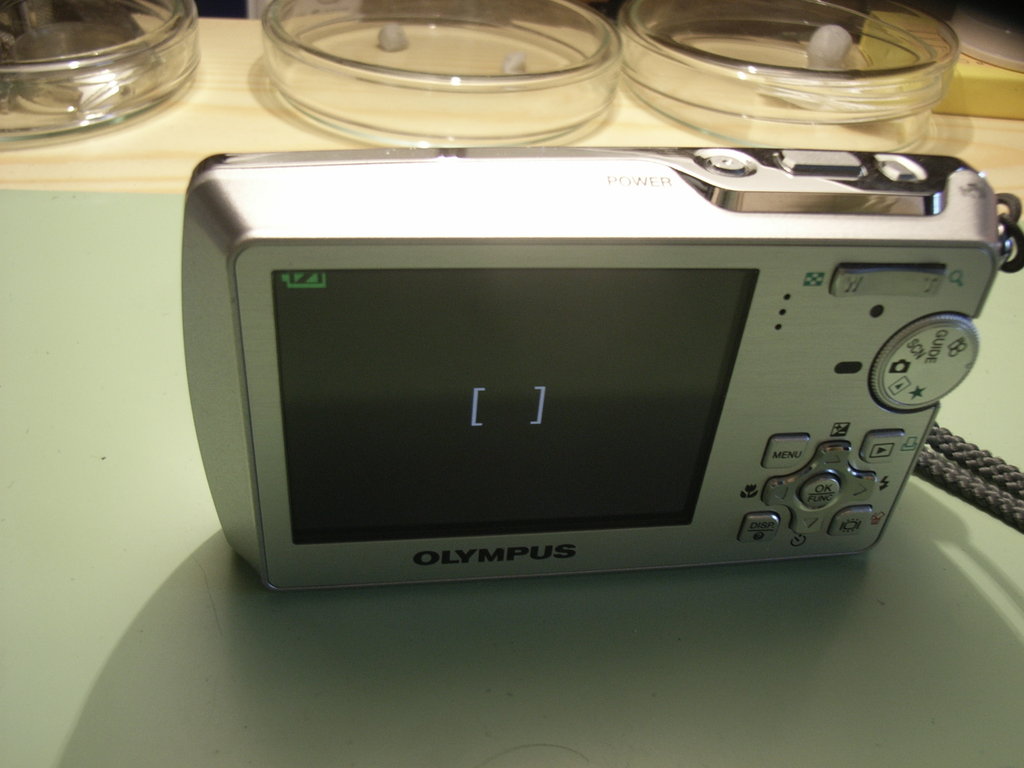 Let´s get it disassembled... 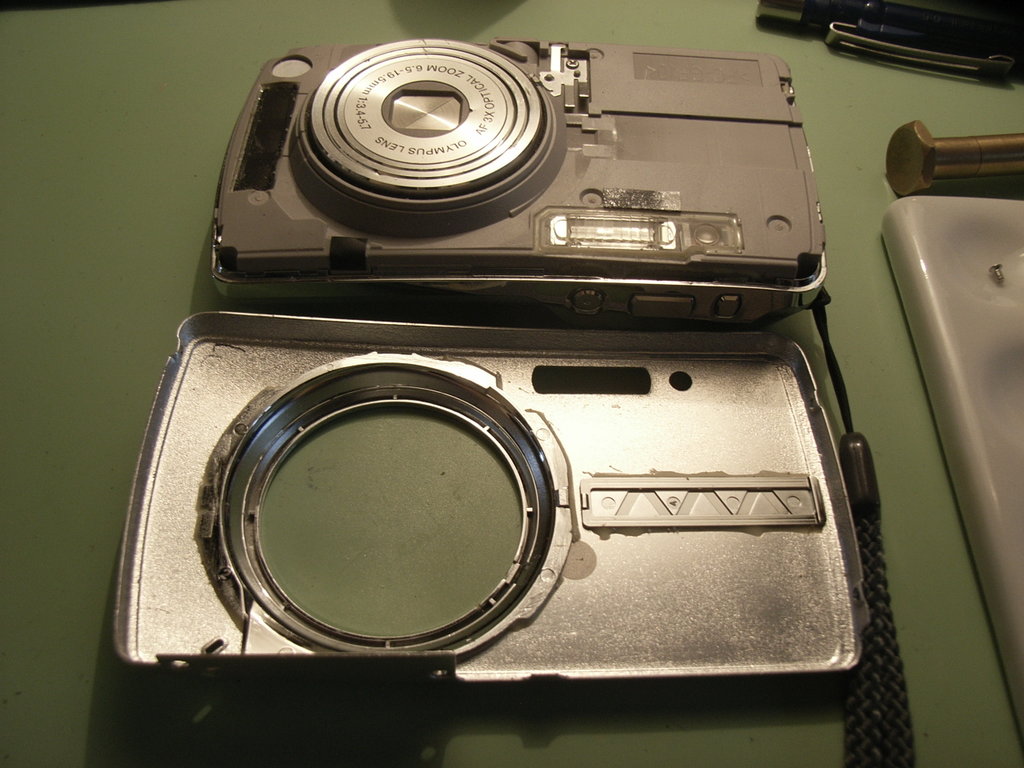 I opened the camera by removing the screws along its front cover. As the small screws are not identical, I suggest to mark their positions if you want to repair your own µ760! The picture above shows the grey inner plastic casing which is probably there for protection (the camera is marketed "wheatherproof").

Next, I removed the four silver screws which held the grey cover in place and I opened the camera gently (be careful not do damage the flex cable linked with the buttons and screen of the camera´s backplane -> blue circle). 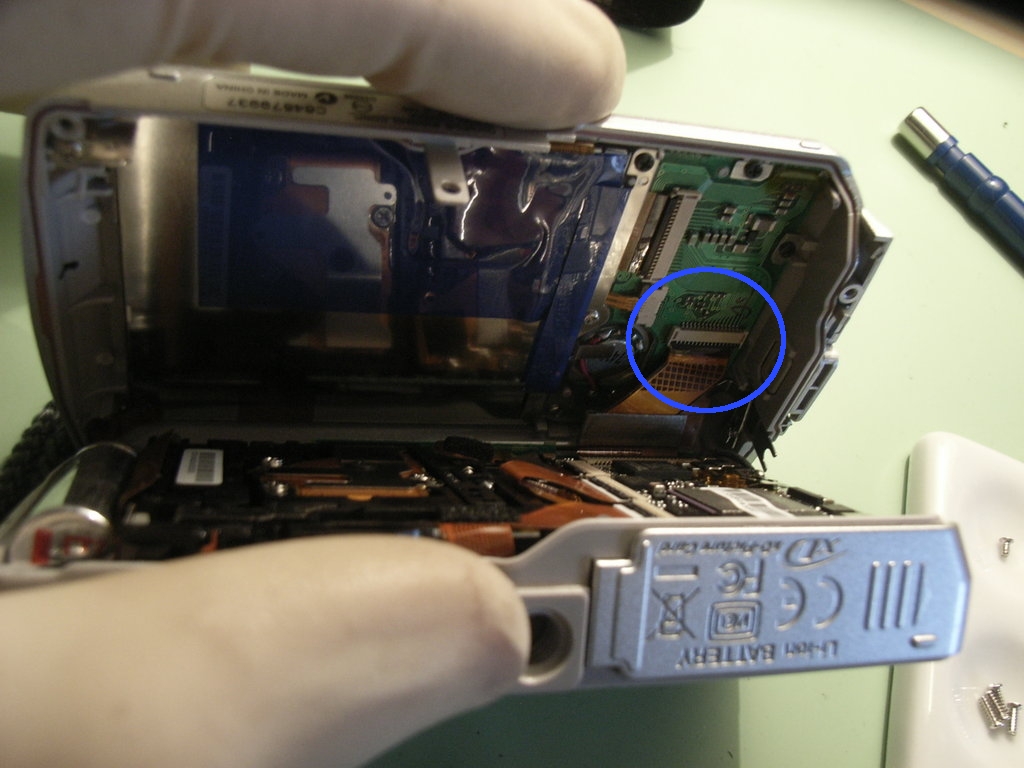 After opening the flex connector the two building groups could be separated without further problems. 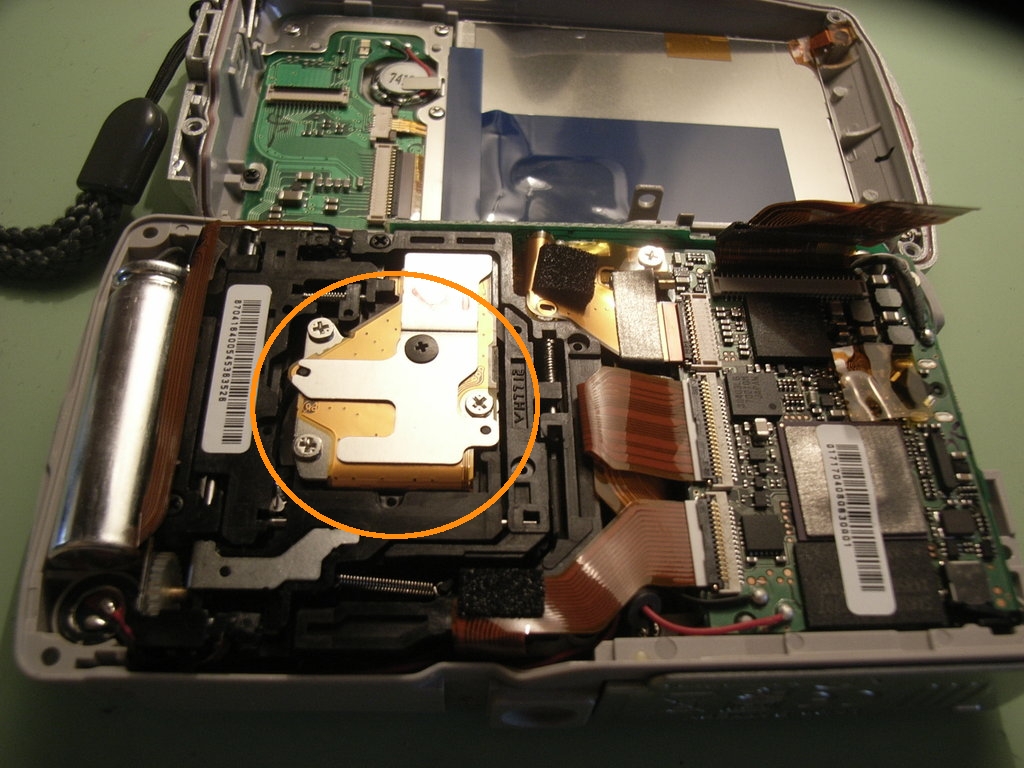 The faulty image sensor (orange circle in the pic above) is held in place with the three silver screws - after removing them, the image sensor could be lifted out: 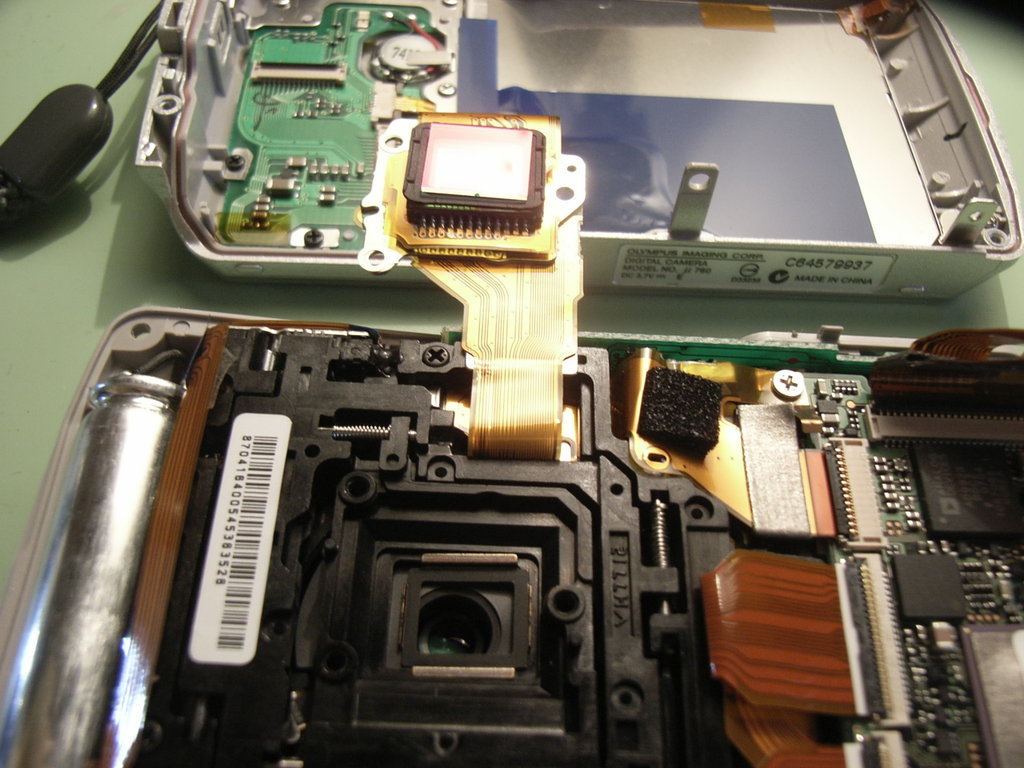 Next, I removed the rubber washer and the red-greenish infrared band elimination filter (IBEF) from the image sensor (the metal frame above the IBEF came off before, you can see it near the lens in the pic above).

The examination under the microscope - I thought it might be reasonable to check the chip BEFORE I continued with further disassembly =-) - revealed what I exspected: A severed wire bond (blue circle, although barely visible). 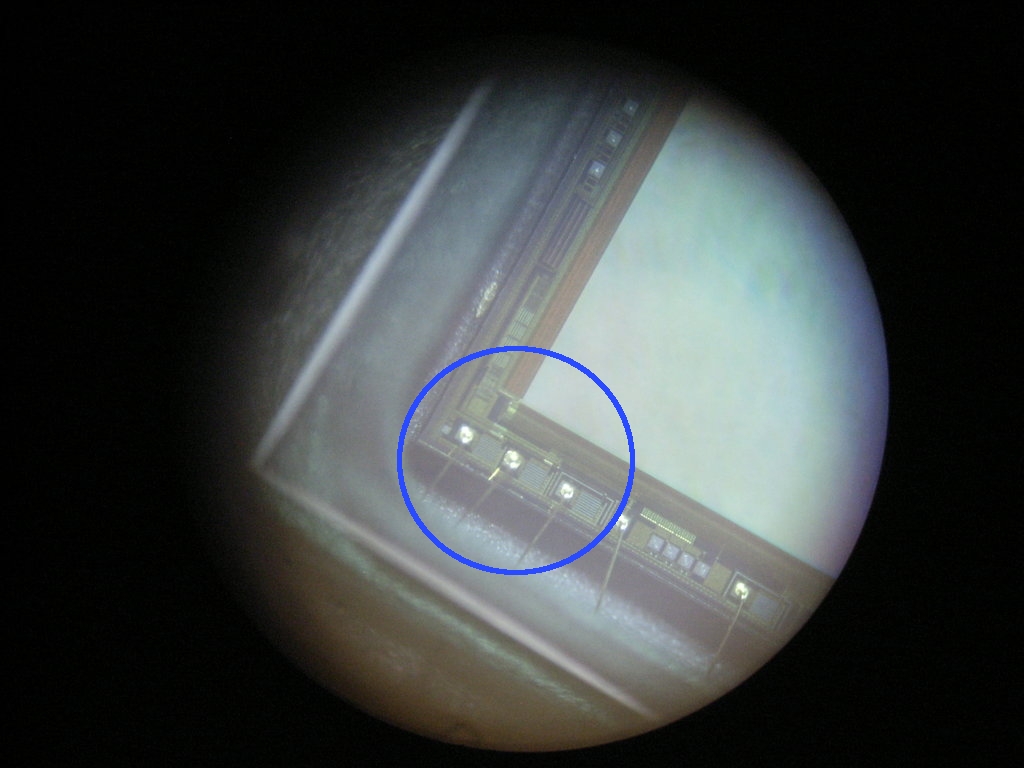 To get the defective image sensor and its flex cable out, required to remove the whole image stabilizer unit (ISU). Therefore, I removed the four screws which hold the image stabilizer in place - here the first two screws (their tips direct to their positions in the camera; be careful with the red-greenish infrared band elimination filter by the way...) 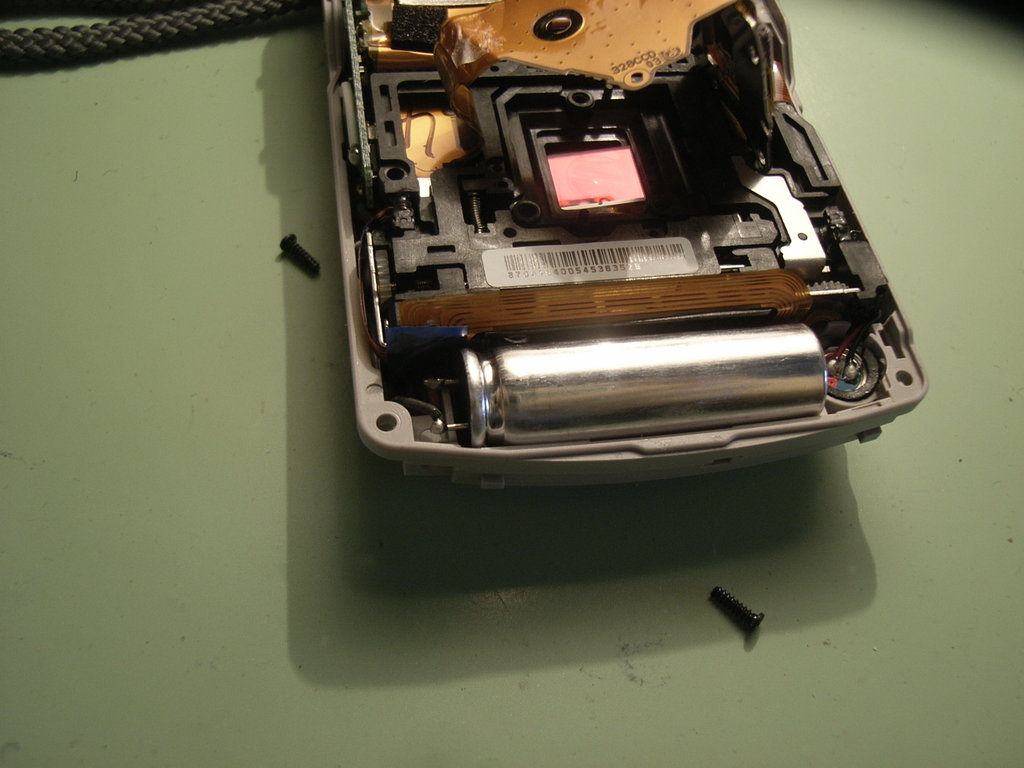 The two other screws were under the lifted flex cable: 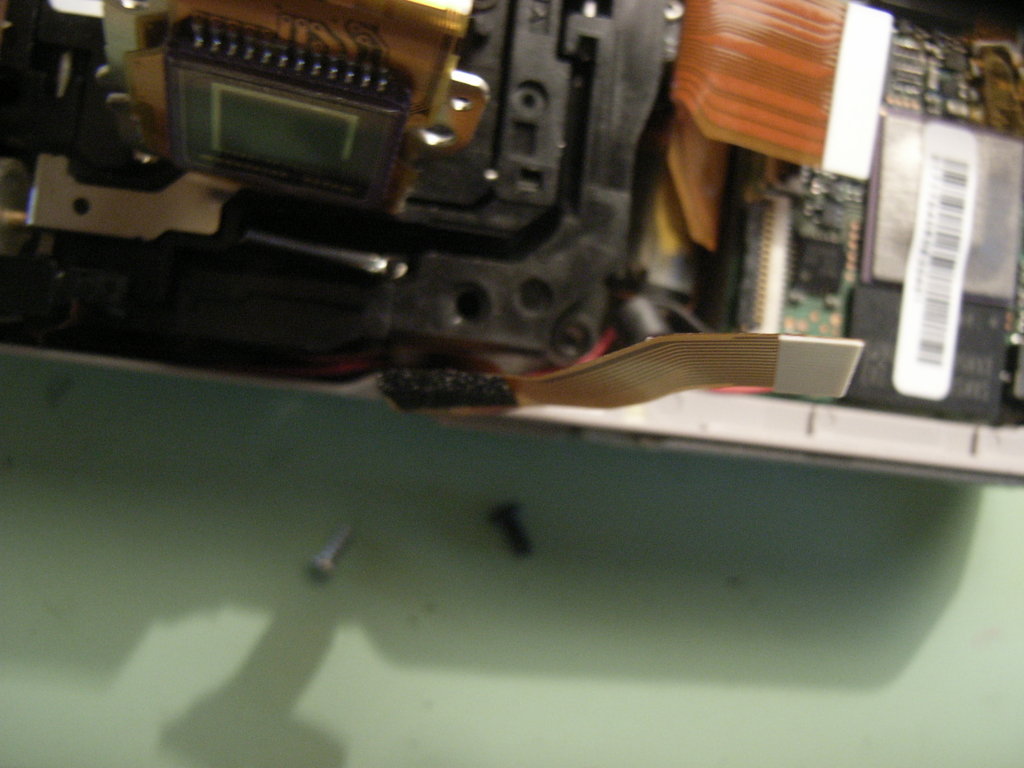 Finally I could remove the ISU... 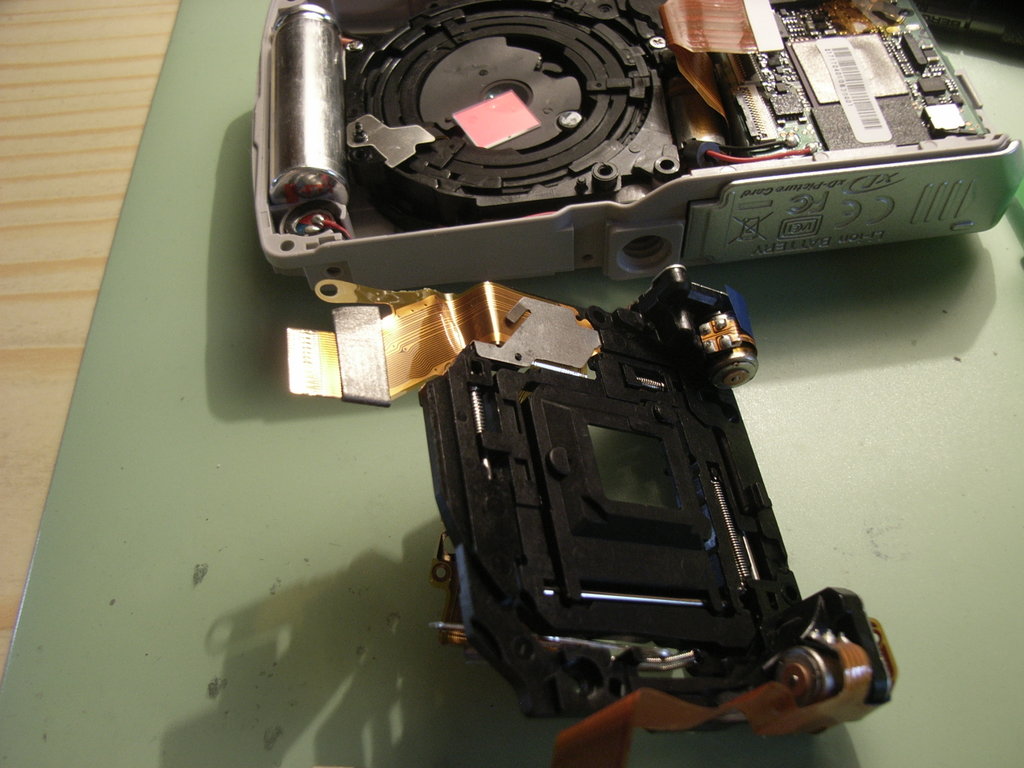 ...and get the sensor out of it (it is fixed to the ISU with a metal clip): 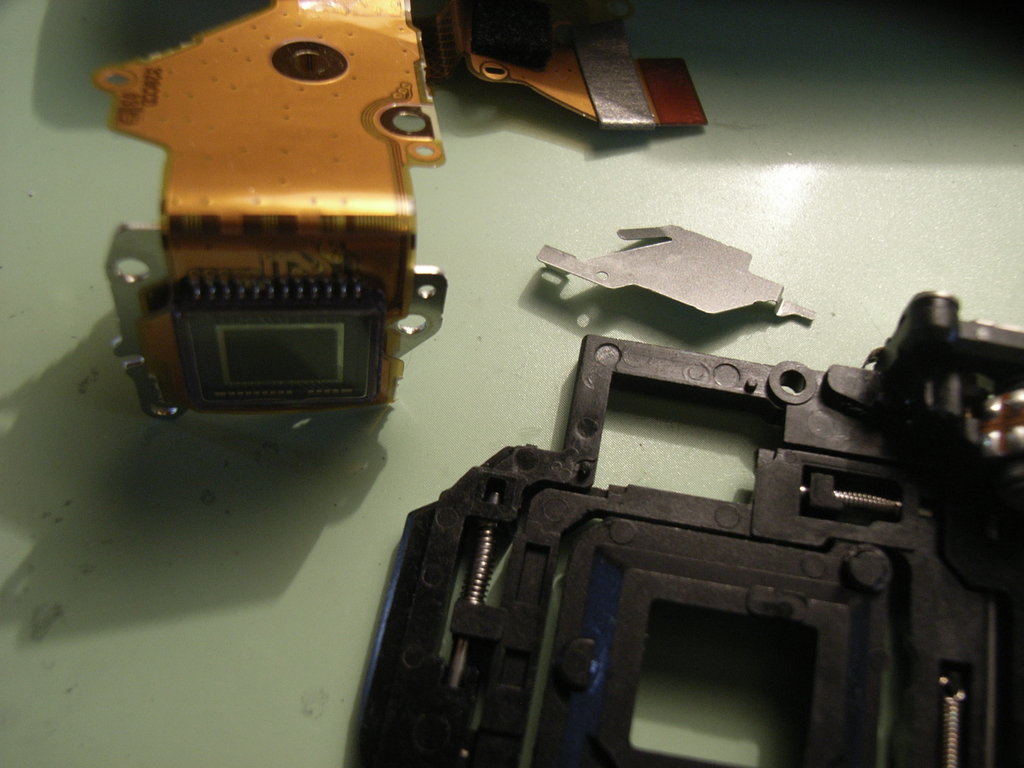 As the new image sensors has not yet arrived (delivery from an ebay seller from Hongkong...), this article has to stop at this point.

After many weeks of waiting the replacement image sensor for the camera arrived from China. Here how it looked like when it came out of its antistatic bag: 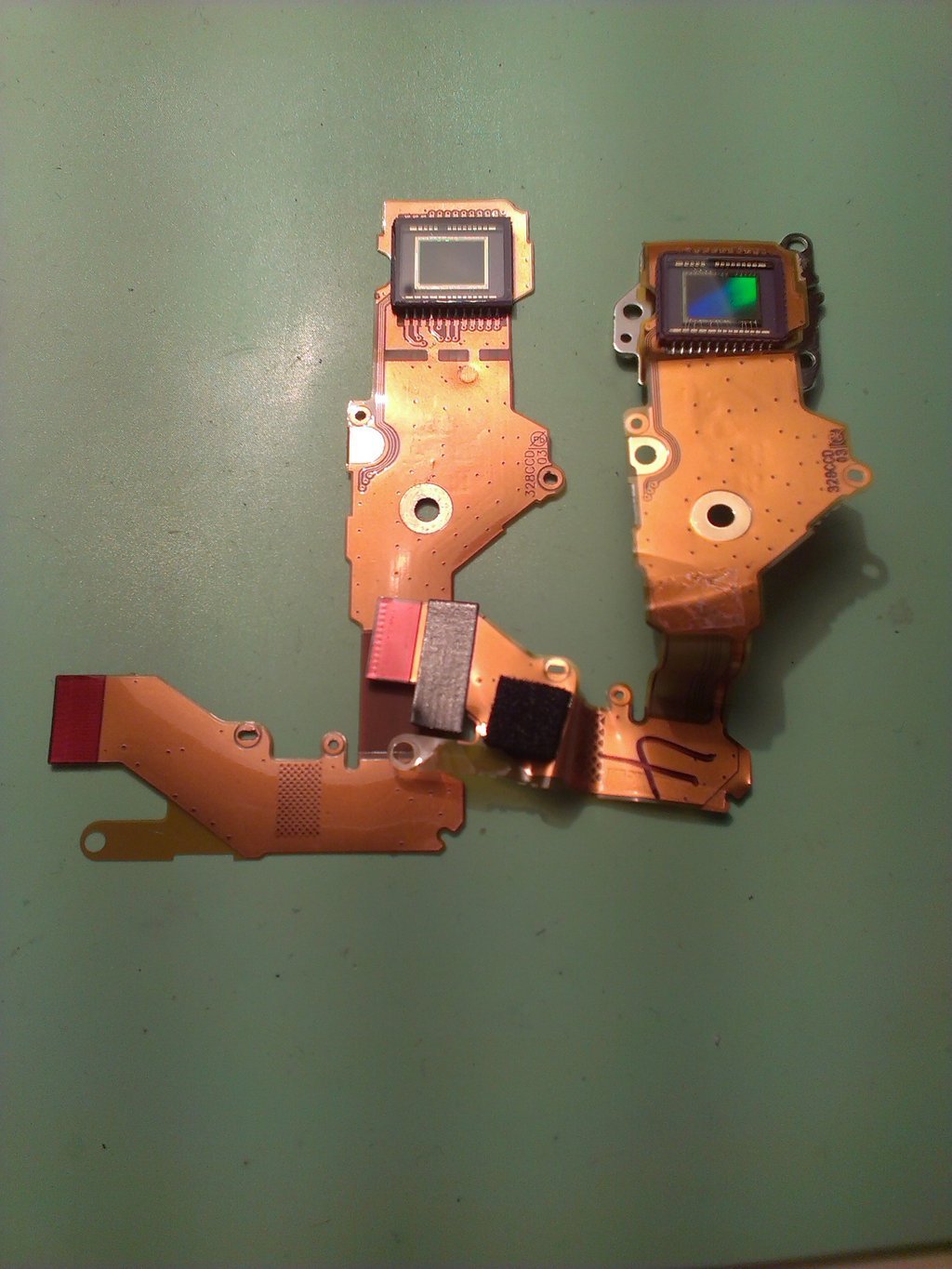 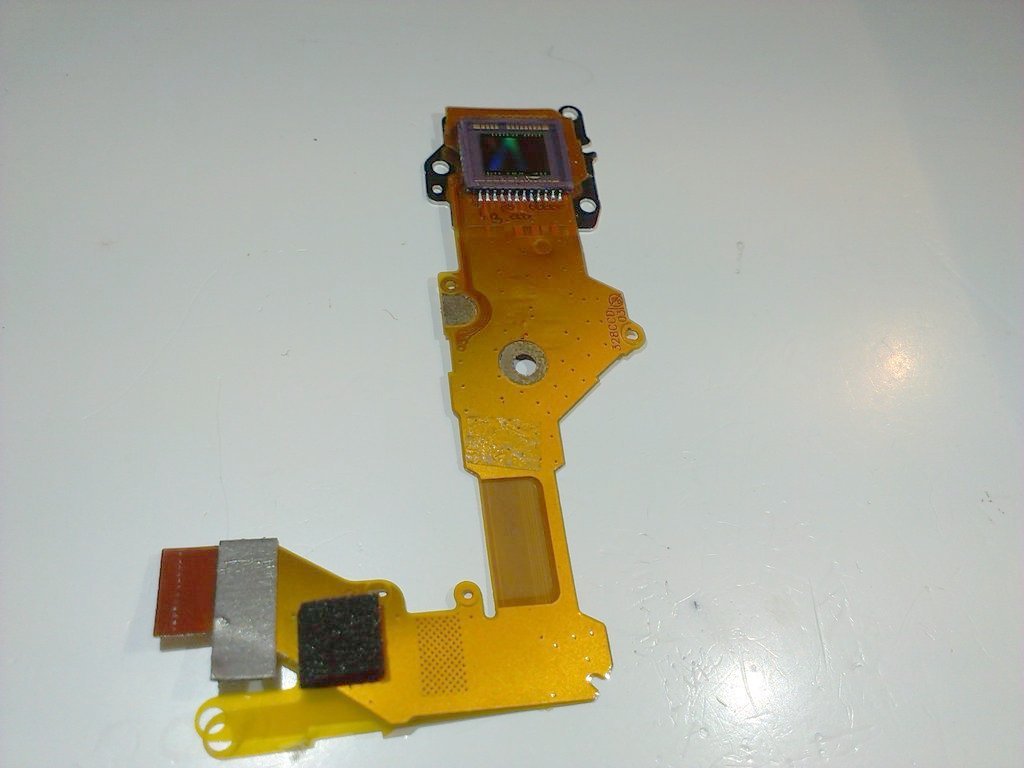 Before reseating the sensor, I cleaned its protective glass cover and the infrared filter thoroughly until not the smallest trace of dust particles or fingerprints remained. Because that close to the image recording area, both forms of contamination would affect large areas of the resulting photographs. 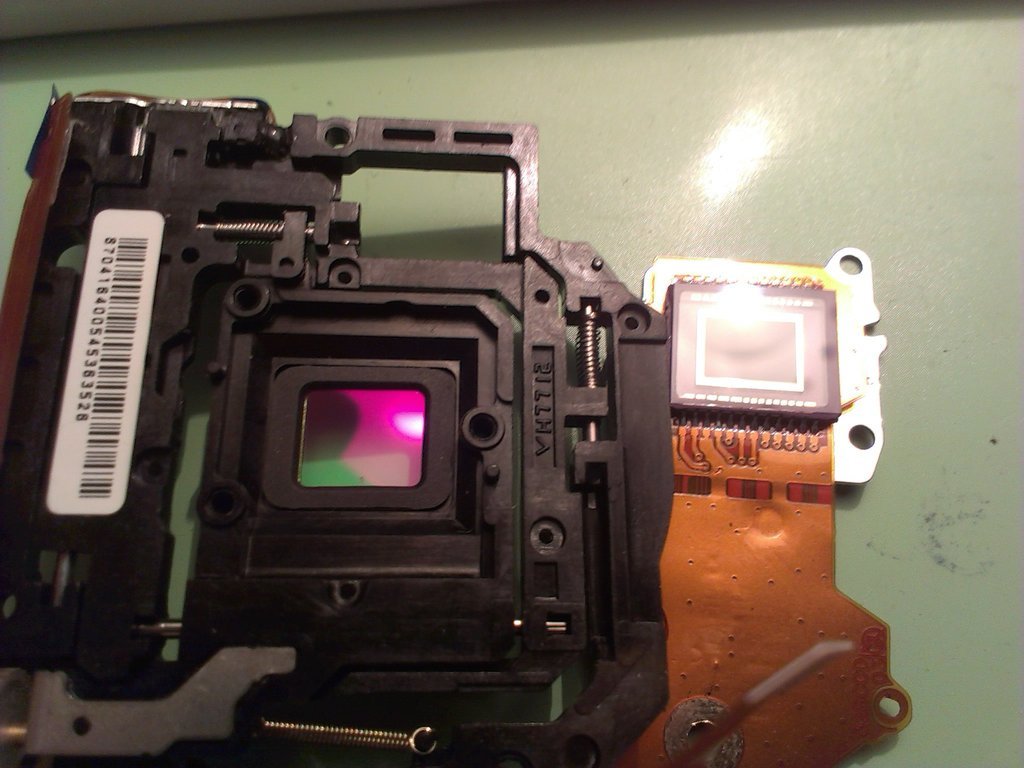 Finally, a small leap forward to the reassembled camera. It can now (proverbially) look back on having had a defective image sensor...!-) 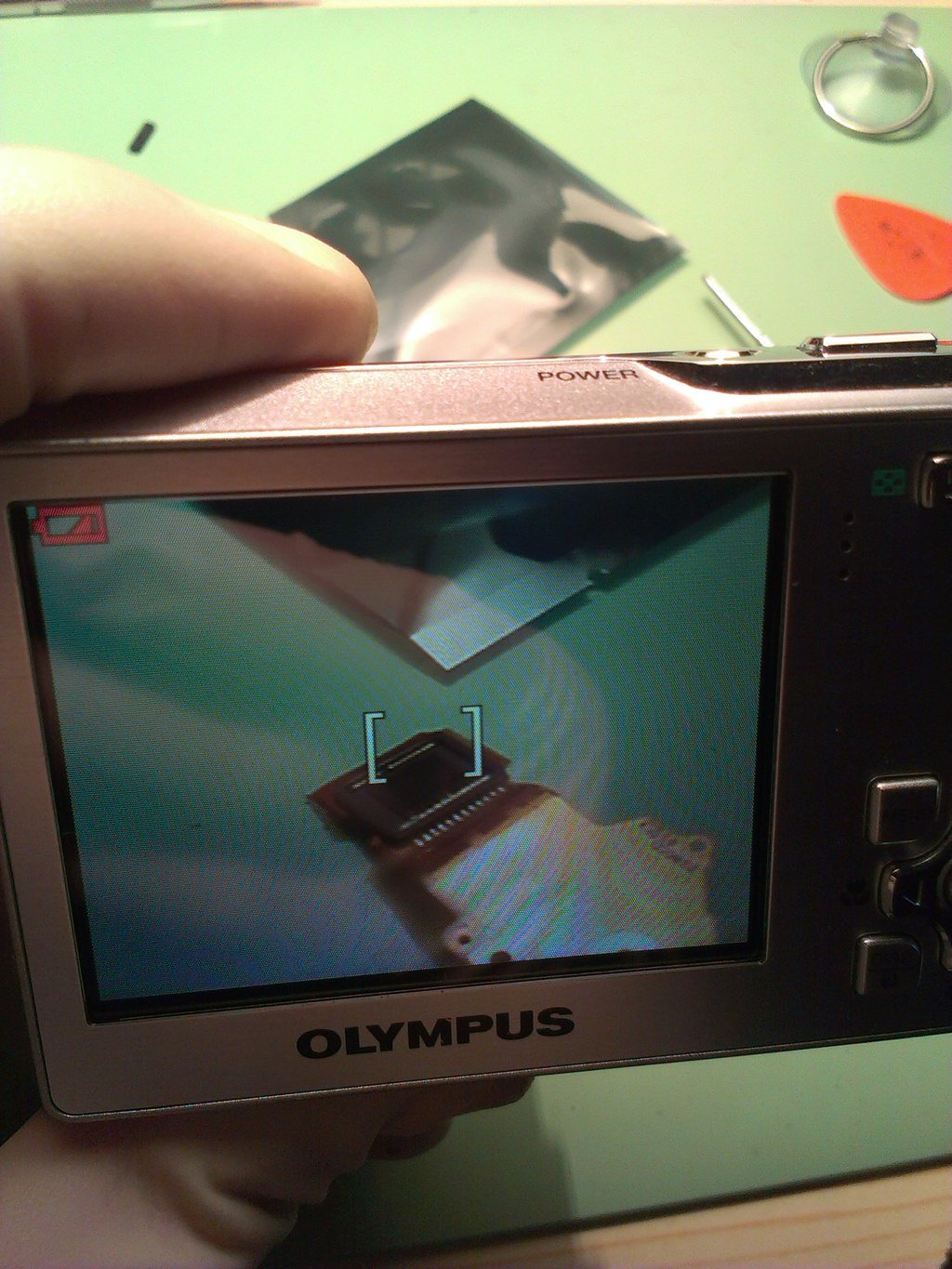