Coreboot (CB) is an open source BIOS replacement that really needs and deserves a lot more attention by the public. Here are some reasons why:

Due to the fact that it doesn´t come preinstalled and the process of setting it up on your hardware is quite poorly documented, CB remains largely unknown outside of the hardware-hacking / BIOS-modding scene (in addition, Intel started blocking the use of alternative firmware since implementing Boot Guard :-/).

Thus it is definitely time for a howto on the full procedure "to coreboot" a Thinkpad, in this case on the example of a Thinkpad X230...

Attention / Disclaimer: The step-by-step howto below can brick your Thinkpad and CB on the X230 - at least in its current form - comes at a cost because...

First, start with getting your OS up to date:

Get git and other dependencies (if you don´t already have them):

Enter the coreboot folder...and get the "blobs" (not a disease - just proprietary, closed source stuff *nooo...* okay, some kind of disease):

Configuring coreboot for the X230

Generate a config-file for compiling the CB image:

Seabios as a payload (basically an ultra-simple boot menu) will give you a simple boot menu. Credits for the overview below go to Eric Holzbach who kindly allowed me to use this passage from his own blog -> Thanks you, Eric):

Then save the configuration as the proposed ".config".

Next, make crossgcc (this step may take a lot of time on slower systems):

If the command above fails during making the ARM-Toolchain (crossgcc-arm) - just continue with the command below:

Then make the ROM image itself:

At the end you should see something like "Built lenovo/x230 (ThinkPad X230)" and find a 12M ROM image coreboot.rom in the coreboot/build folder.

The X230 has two flash chips which form a 12M virtual flash chip (8M+4M). As described on the coreboot-x230-guide only the smaller 4M chip needs to be flashed:

After this last step we finally have the desired coreboot image "x230-4M.rom".

There are actually several ways to get coreboot to the 4M flash chip. You can do it using a Raspberry Pi and a Pomona clip or you can use an EEPROM flasher like I did (the MiniPRO by Autoelectric).

This method requires desoldering the 4M flash chip from the board. Thus it´s a procedure that might require some advanced soldering equipment / skills (however in my opinion it is a lot faster and less prone to contact errors than the Pomona adapter solutions here or there).

Getting the flash chip out

Opening the X230 is a straight-forward task - the Hardware Maintenance Manual (HMM) will lead the way. Nevertheless, here a short teardown.

Remove the battery and the eight screws that hold the palmrest and keyboard: 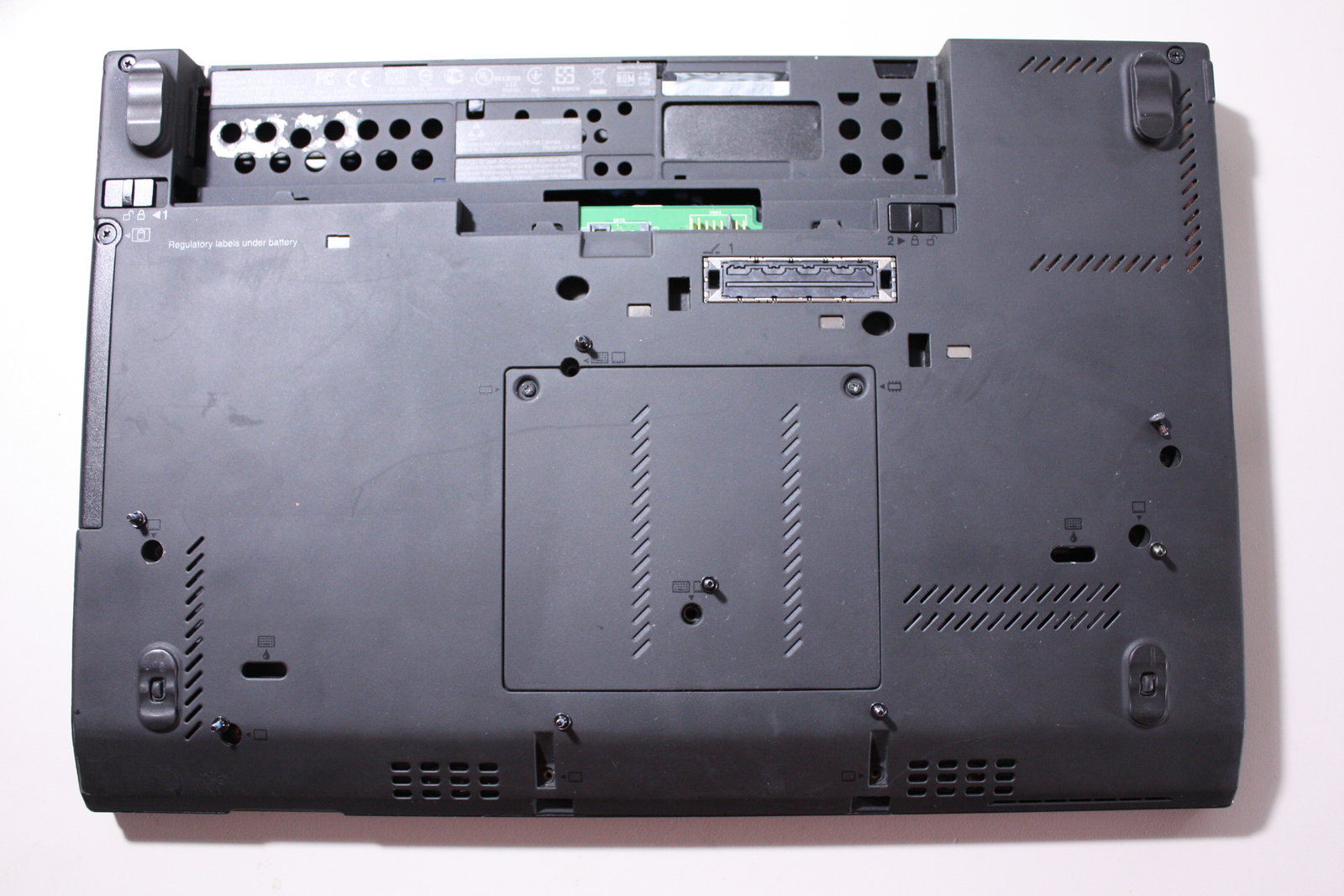 Push the keyboard towards the screen, lift it out and release the keyboard flex cable by taking it between index finger and thumb and pulling it out gently from the connector (orange circle). Remove the two silver screws (blue circles), disconnect the display cable (pink circle) and the touchpad/fingerprint-sensor flex cable (red circle). 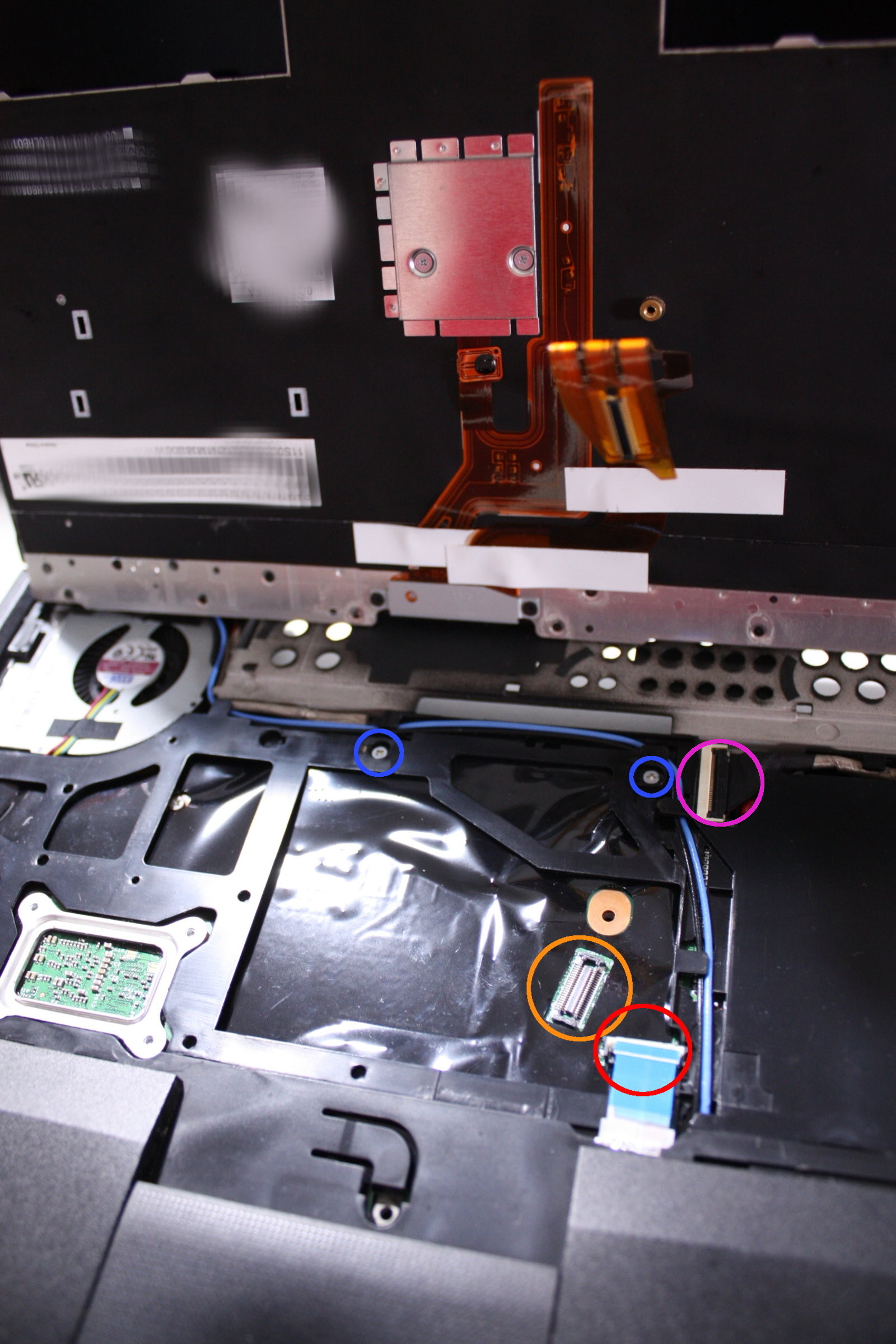 Then take the antenna cables out of their ducts and get the keyboard bezel out. 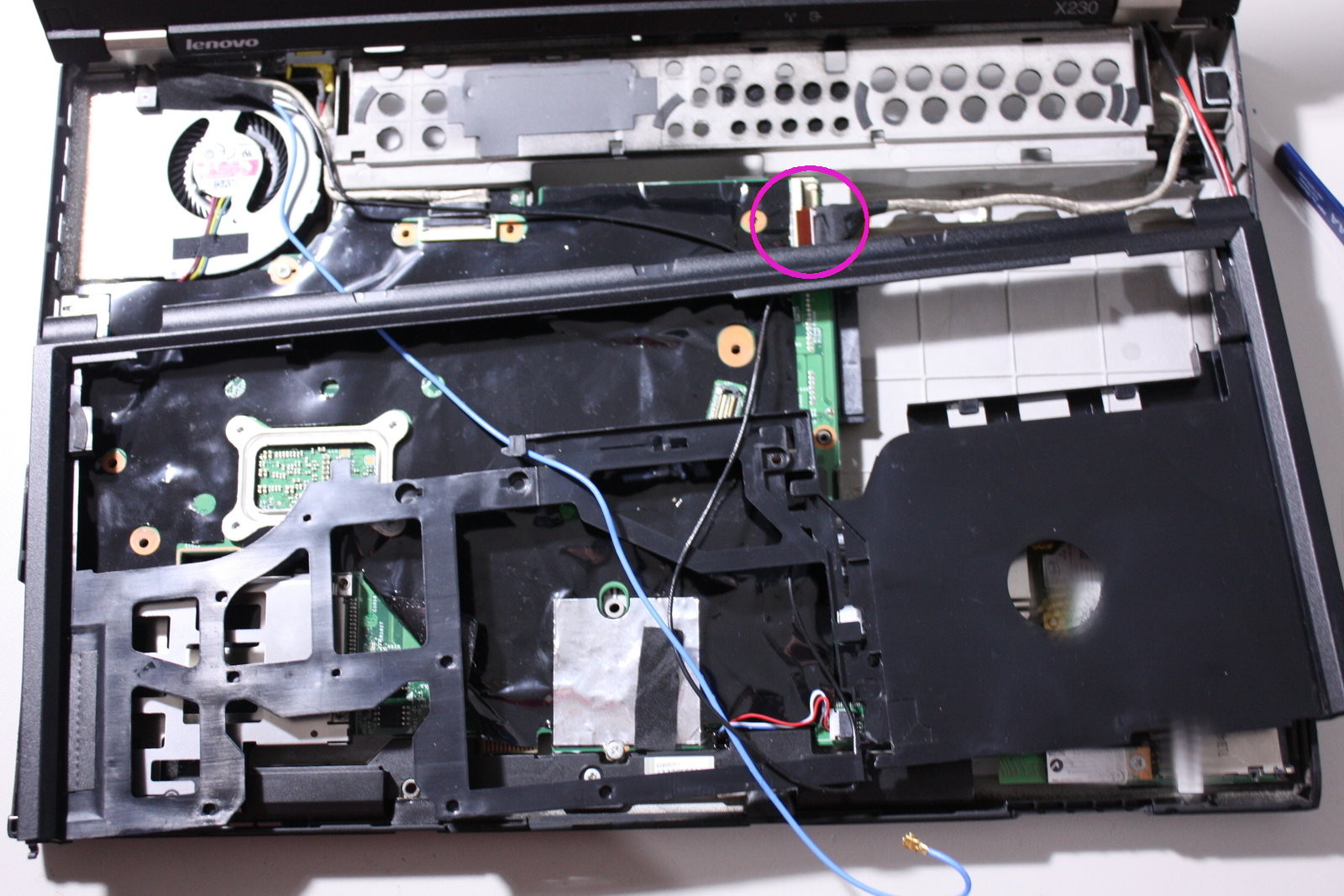 Then you can uncover the two flash chips by peeling away the black foil next to the Express card slot (blue circle): 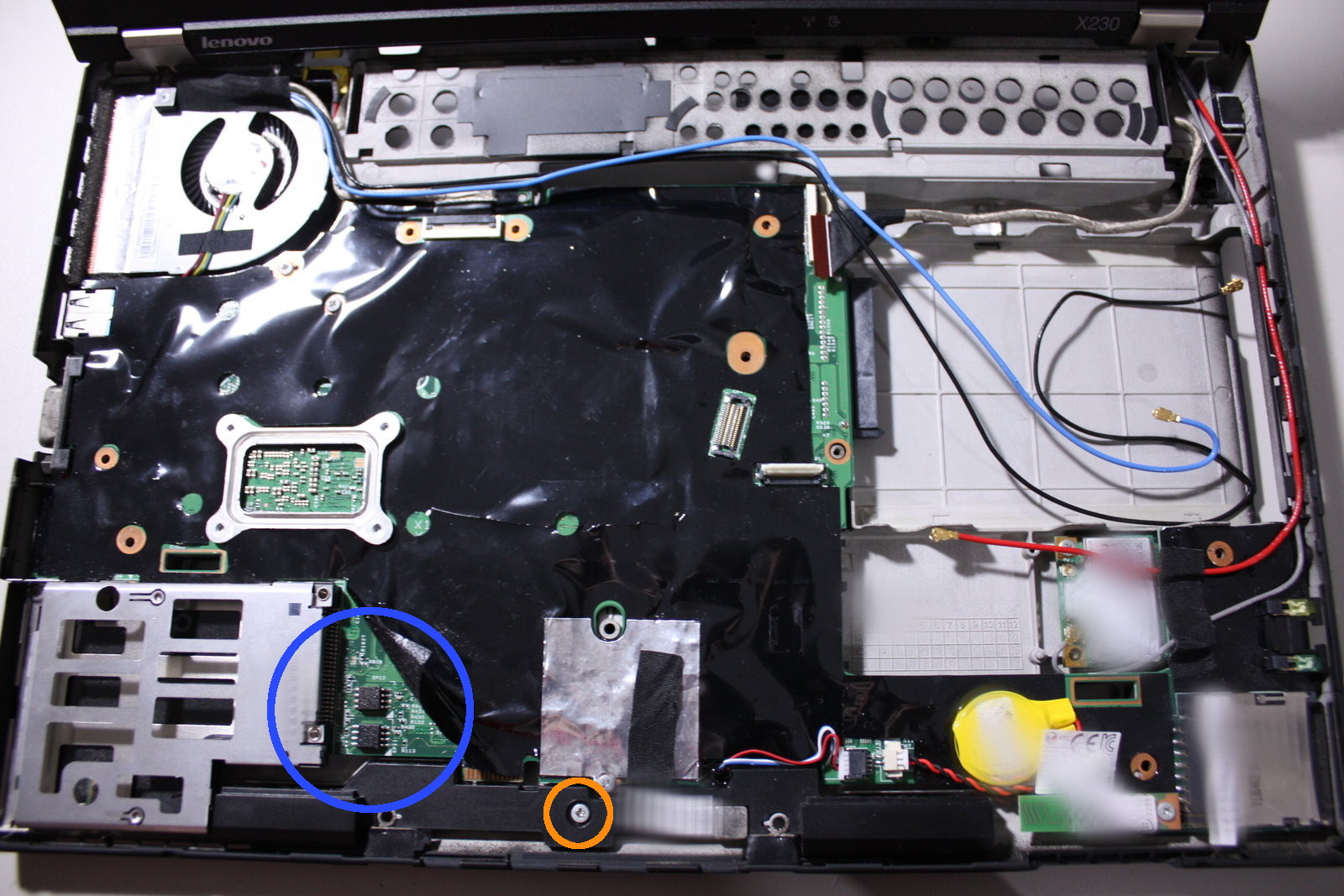 We need to take out the upper flash chip, to desolder it will require some significant heat as it is soldered to the board with lead-free solder. To avoid damages to your Thinkpad - especially its mainboard and plastic parts - be sure to remove as much as you can (e.g. take out the yellow BIOS backup battery and the plastic loudspeakers by releasing the Orange-encircled screw in the picture above). Then shield everything with aluminum foil. 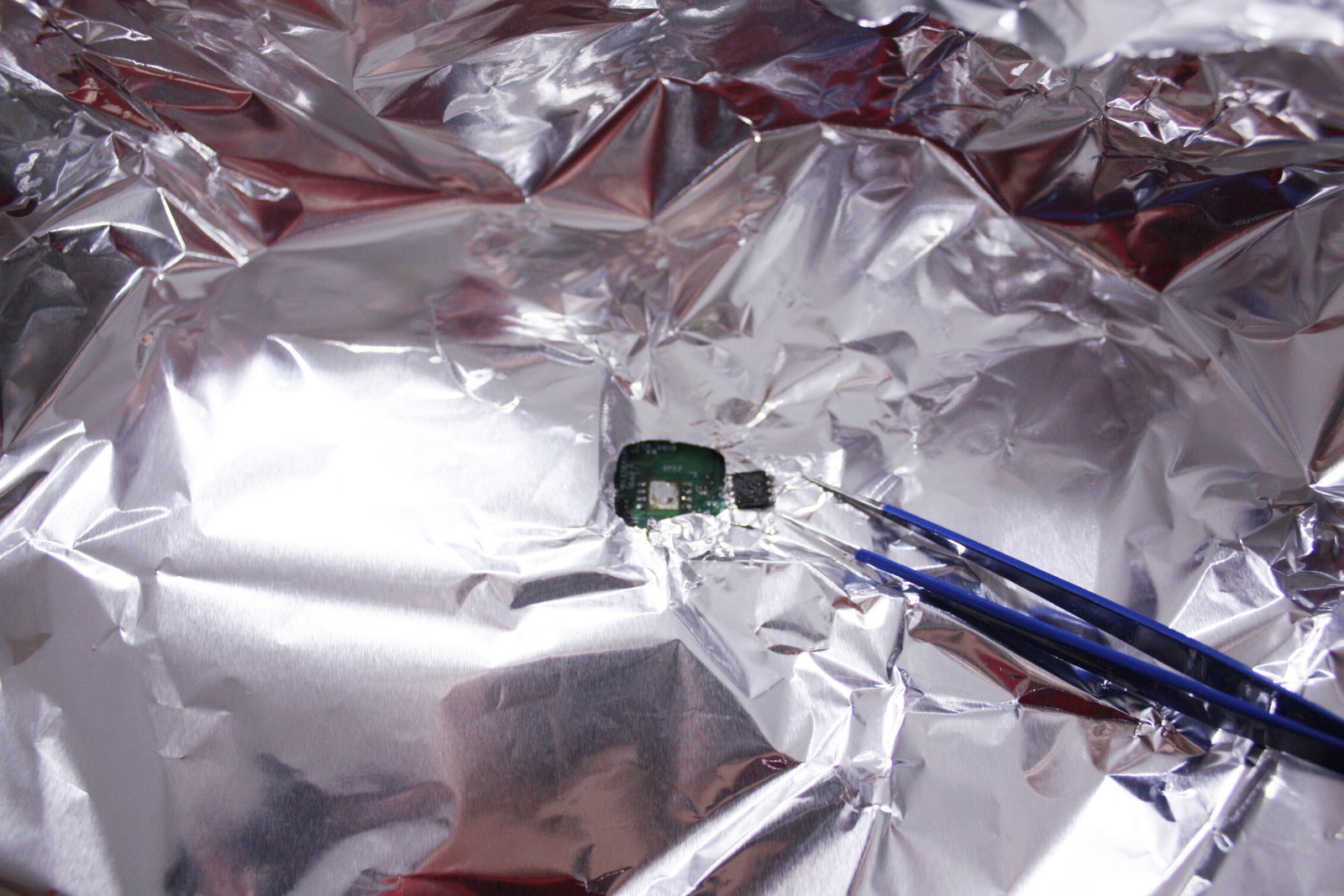 I also recommmend to use Kapton adhesive to fix the aluminum foil around the chip to the mainboard (I couldn´t find some :-/) - then you can desolder it using a fine stream of hot air directed to the chip´s legs (it took around three minutes at 300 °C to heat the area around the chip up until the solder finally melted). 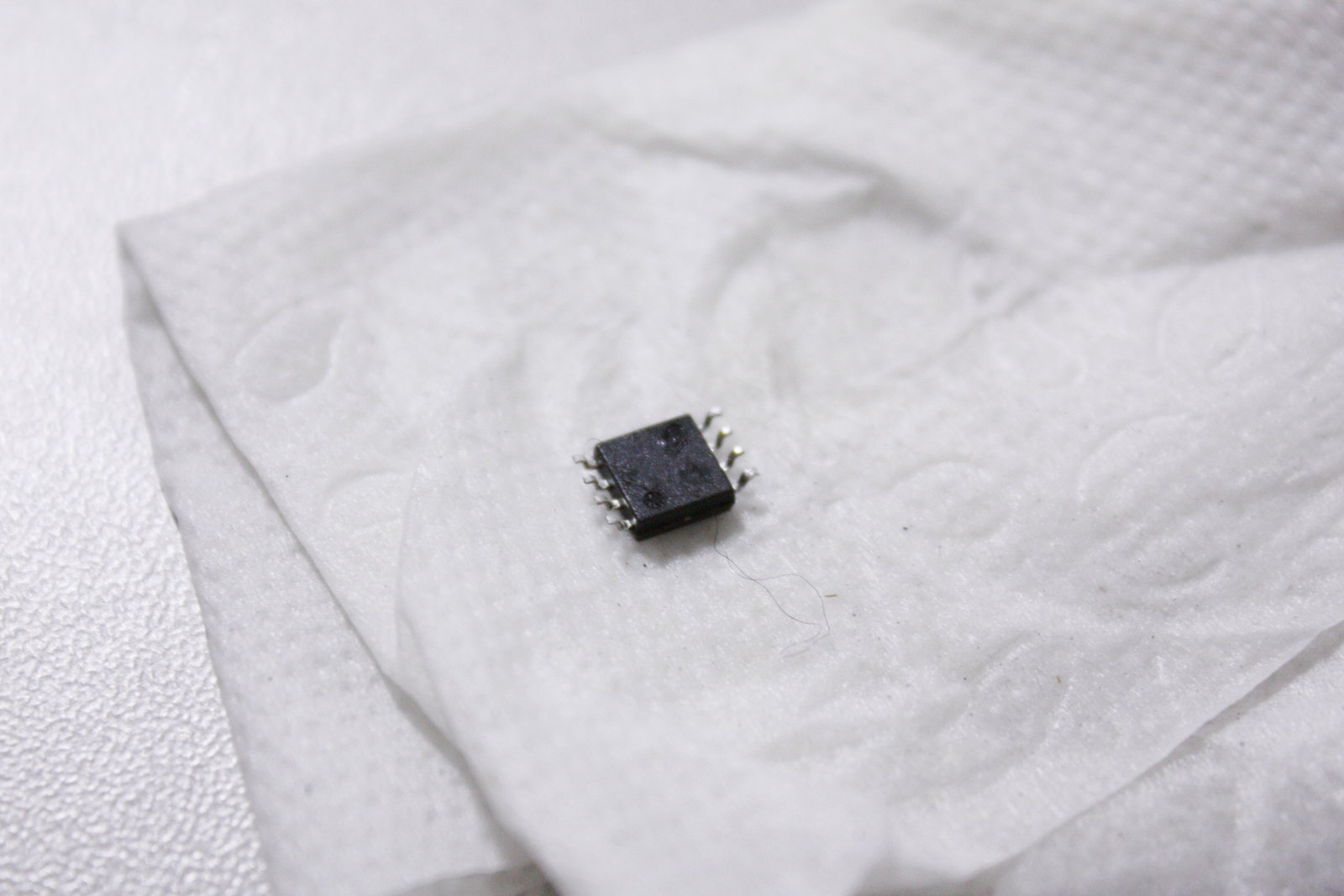 To remove the adhesive rests from the chip I rubbed it on a tissue (okay...toilet) paper that I soaked in ethanol.

It´s a Macronix MX25L3206E flash chip that is perfectly compatible with the SOP8-adapter of the MiniPRO (pin 1 is marked by an encarved dot on the chip´s housing): 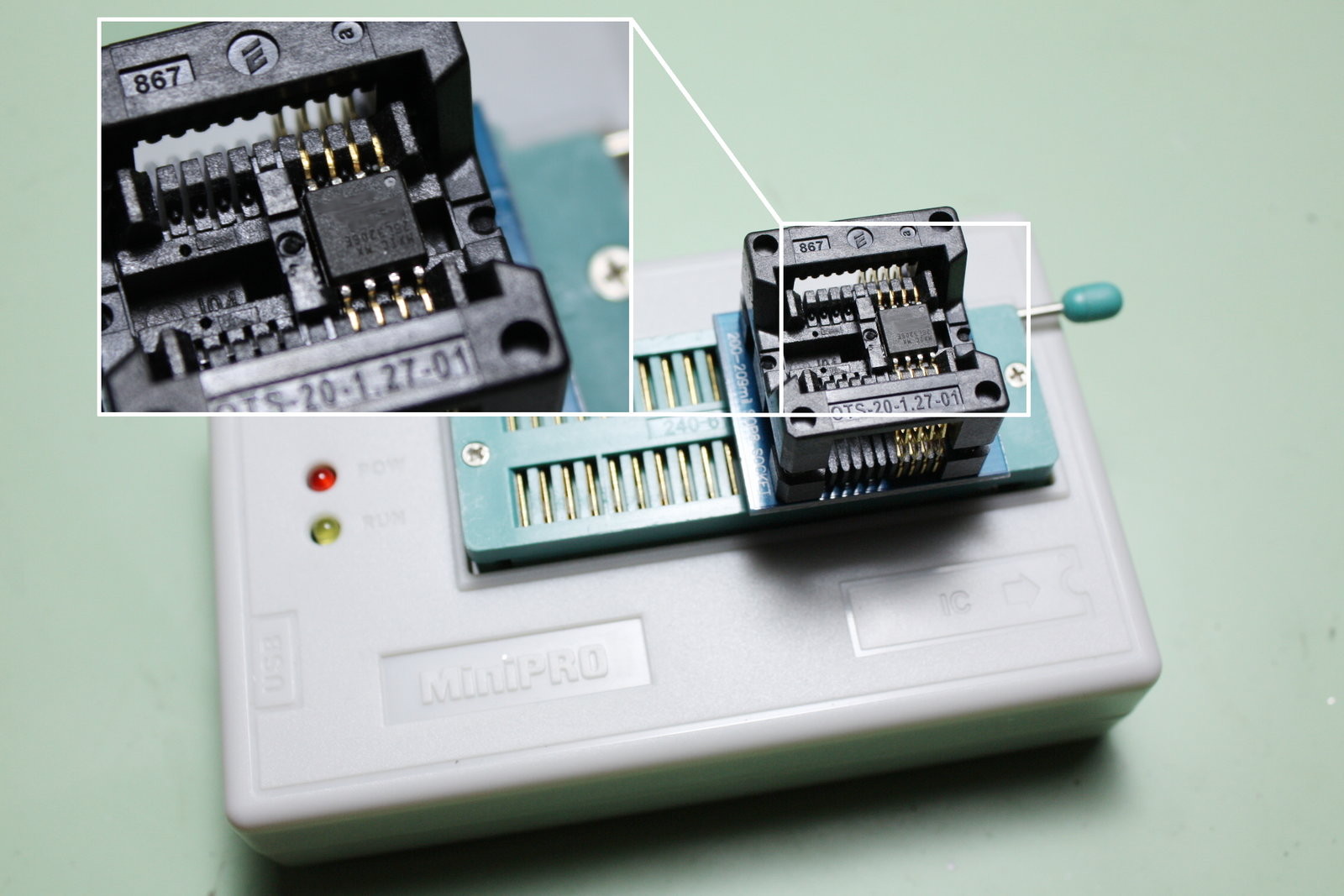 Select the MX25L3206E in the MiniPRO software, read its content out - two times just to be sure - and save the resulting files to a secure place (maybe you do not want to keep coreboot forever...). 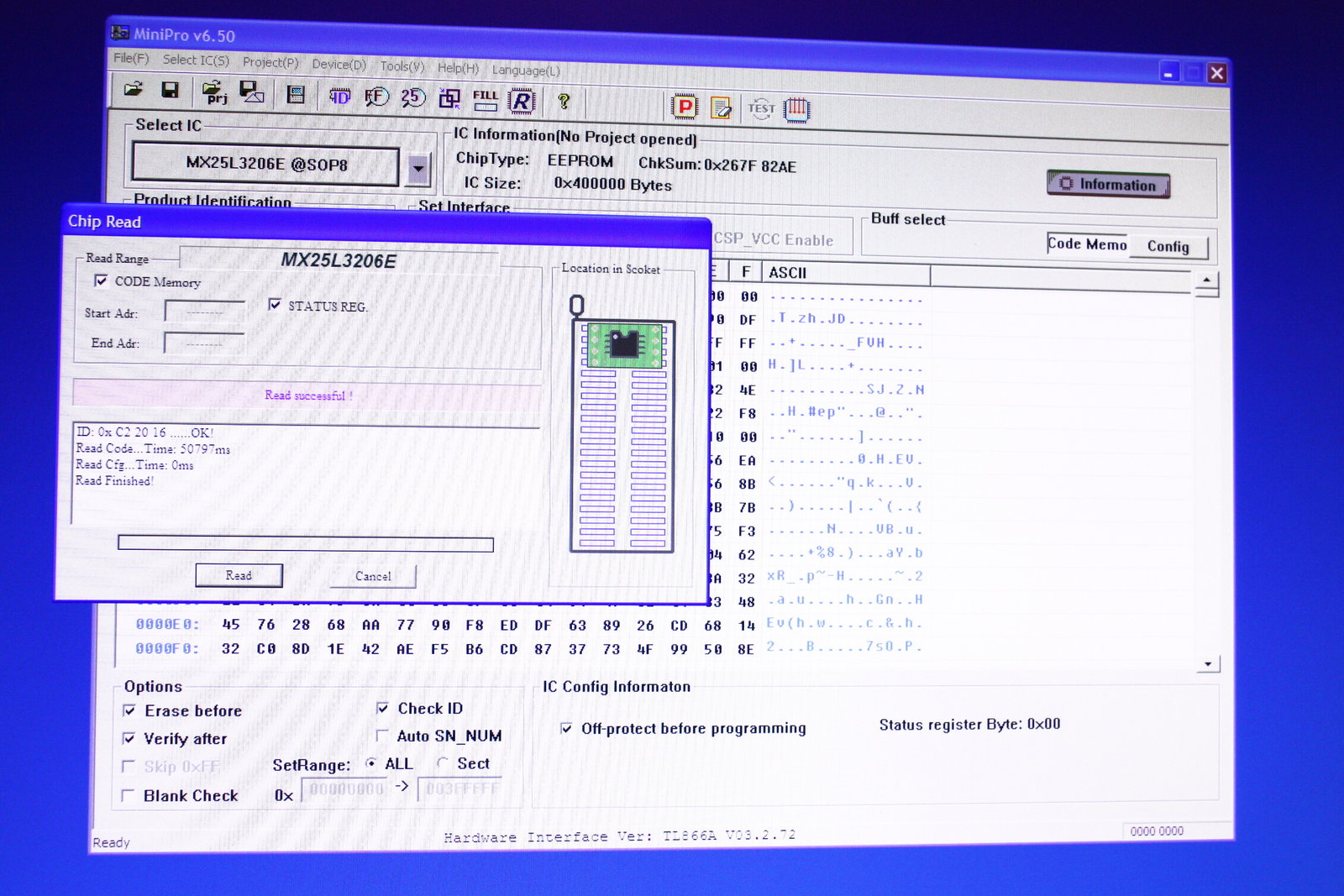 On the left the original Lenovo firmware - on the right the coreboot image, both should have the same number of bytes. 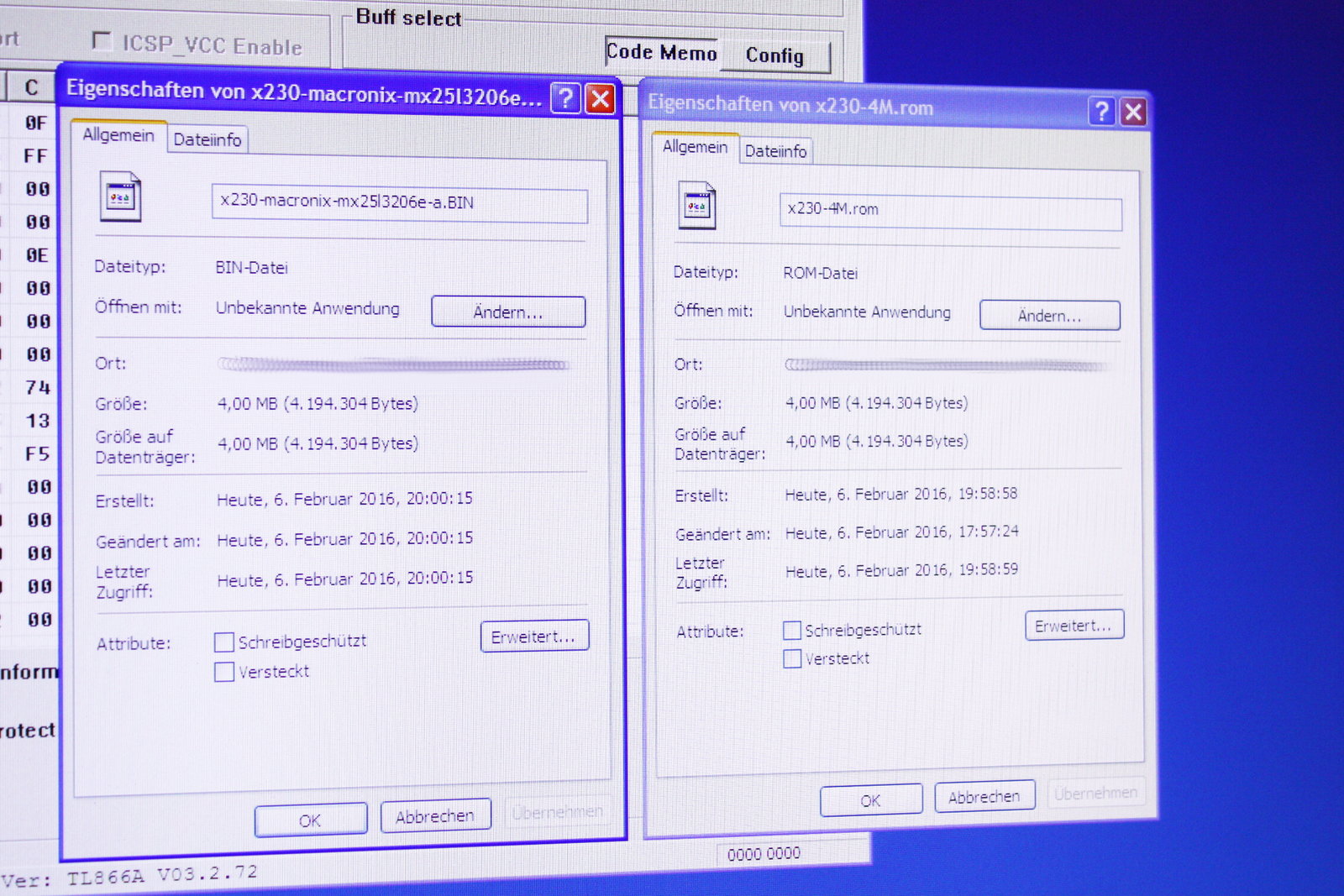 Finally, select the coreboot ROM and write it to the flash chip. 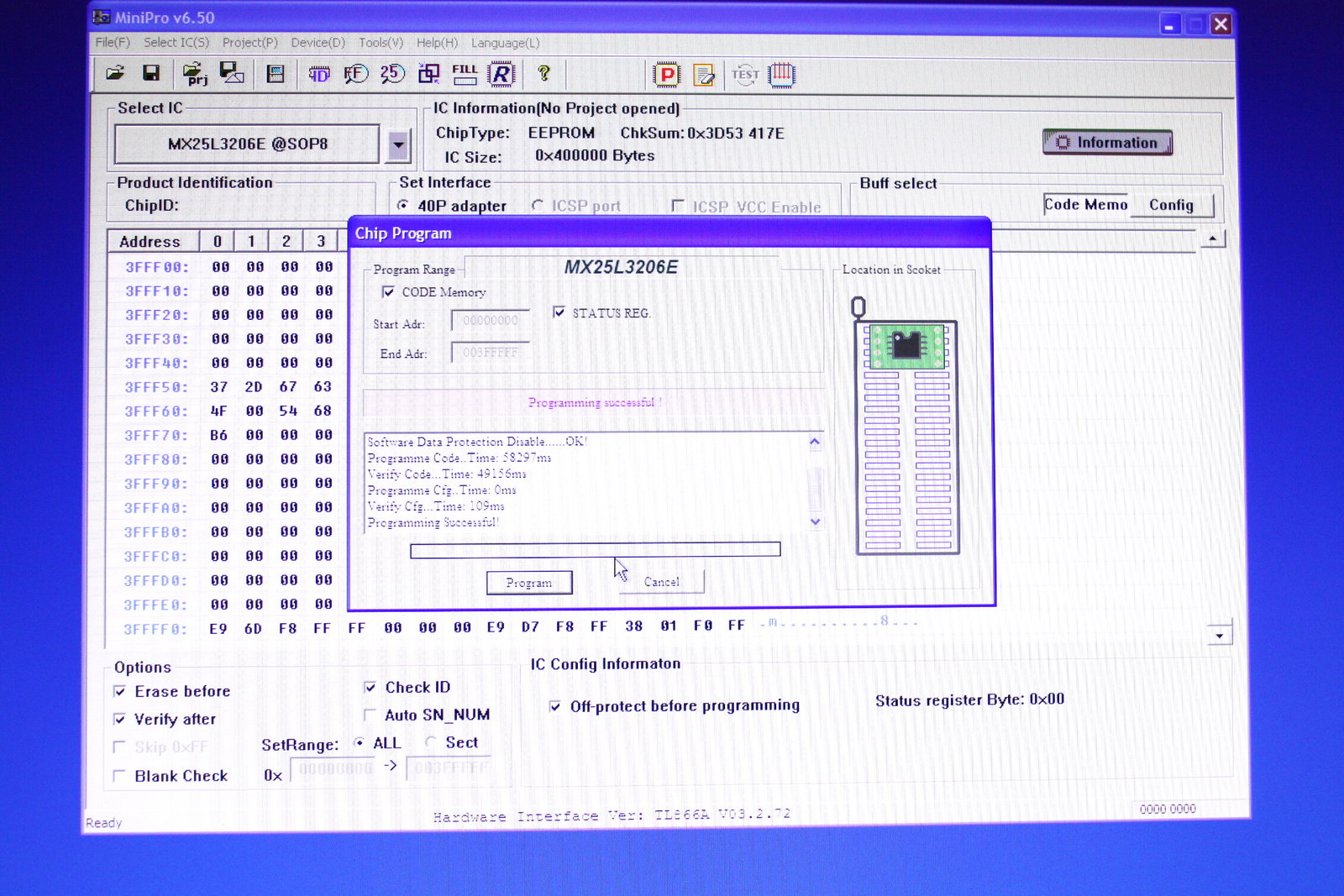 If everything worked out, resolder the chip - preferably with lead-containing solder (due to its lower melting point it will be much easier to get the chip off again if necessary). 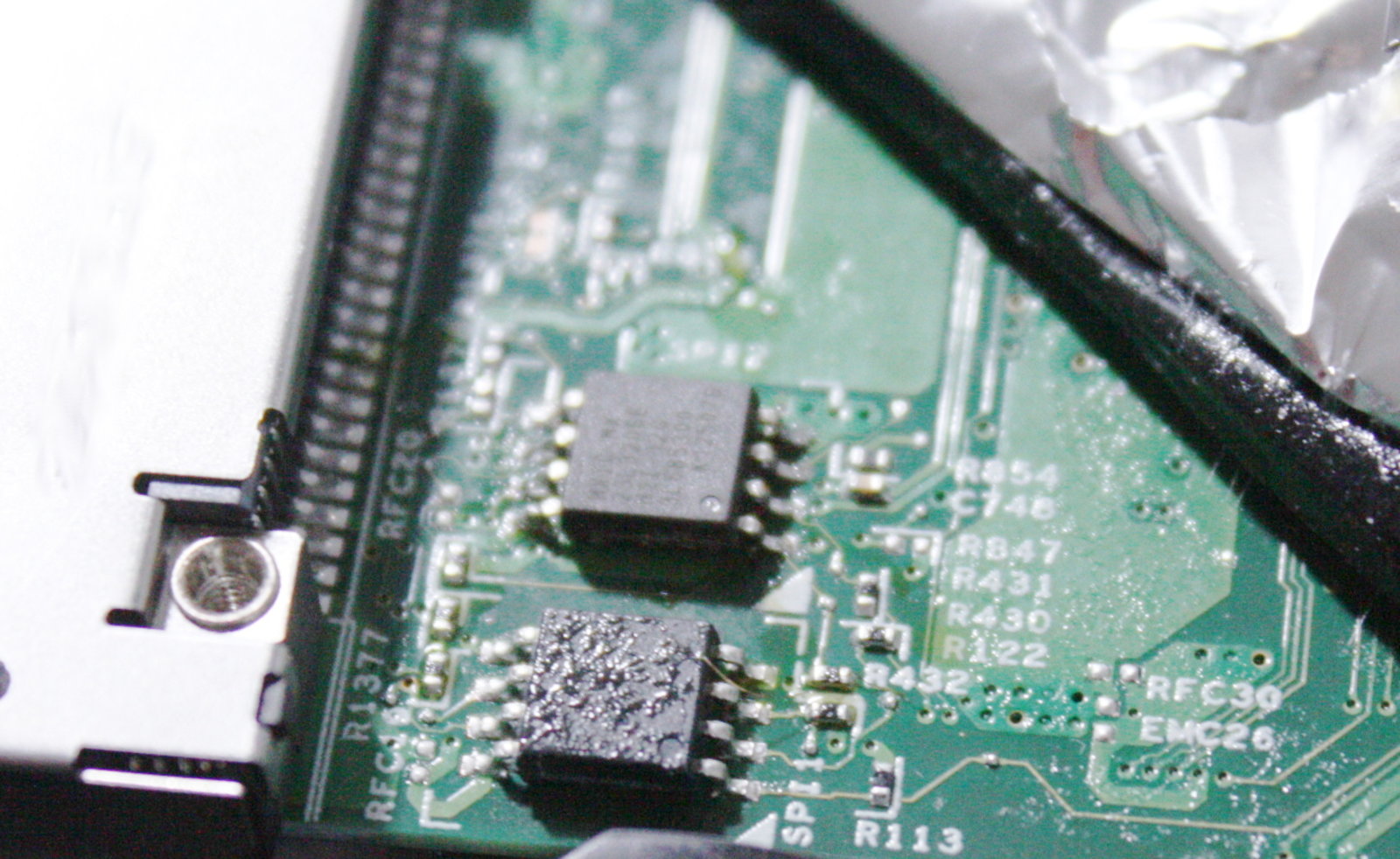 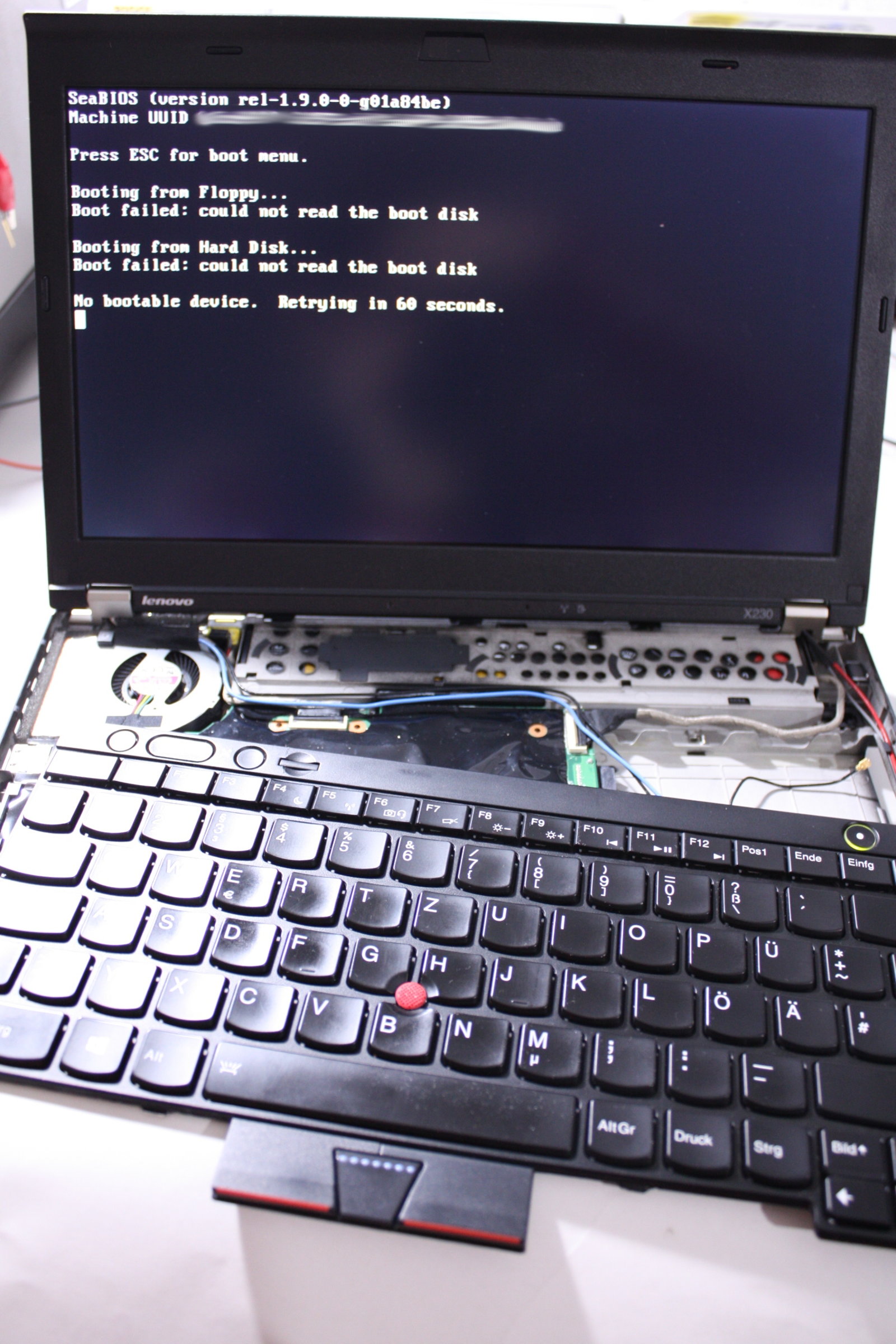 Booting to the Ubuntu 14.04 desktop is now possible in under 10 seconds (e.g. on Samsung 850 Pro) and the whitelisting issues are gone, too. But I also won´t suppress the fact that I encountered some trade-offs:

So my current verdict:

Despite some clear drawbacks, coreboot on the X230, as well as in general, definitely has lots of potential.