I recently acquired this faulty Benrus watch from the early 1970s (Benrus is a word combination of the founder´s name Benjamin Lazarus - just fyi). Here some first pics of it: 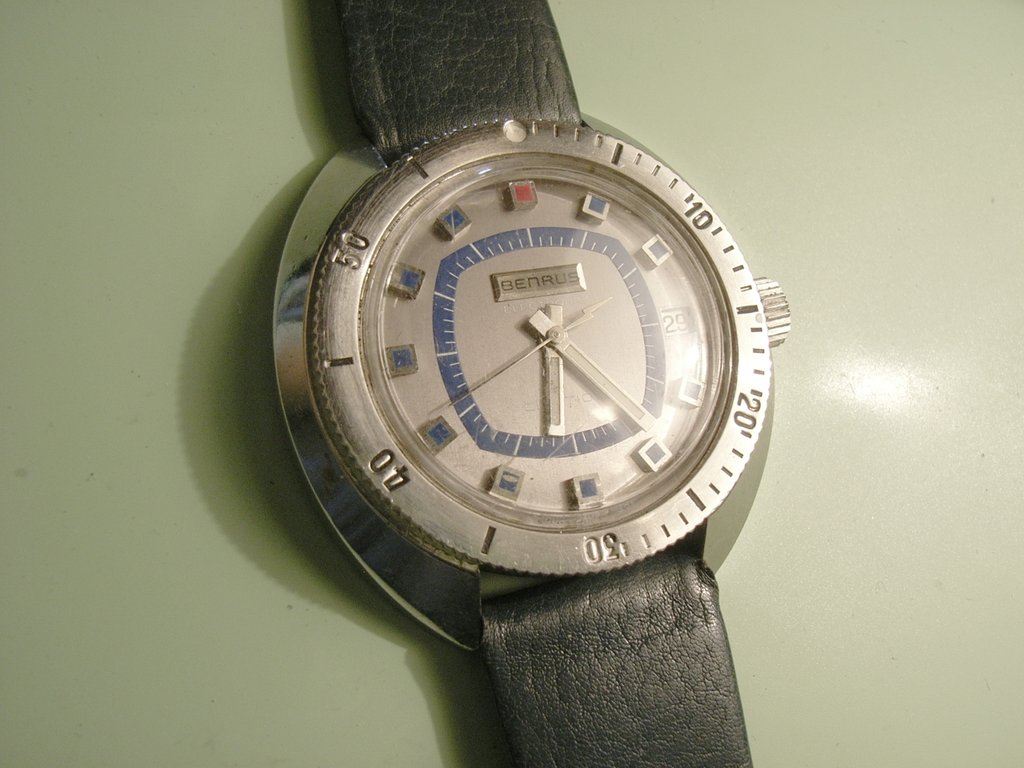 Case and crystal feature the typical scratches after probably many years of use. The second hand has a unique form - a stylized electric spark =-)

Interesting: The caseback of this watch cannot be removed. Instead, the movement has to be taken out from the dial side of the watch (the crown can be torn out - just keep pulling after the watch is in its time setting position). 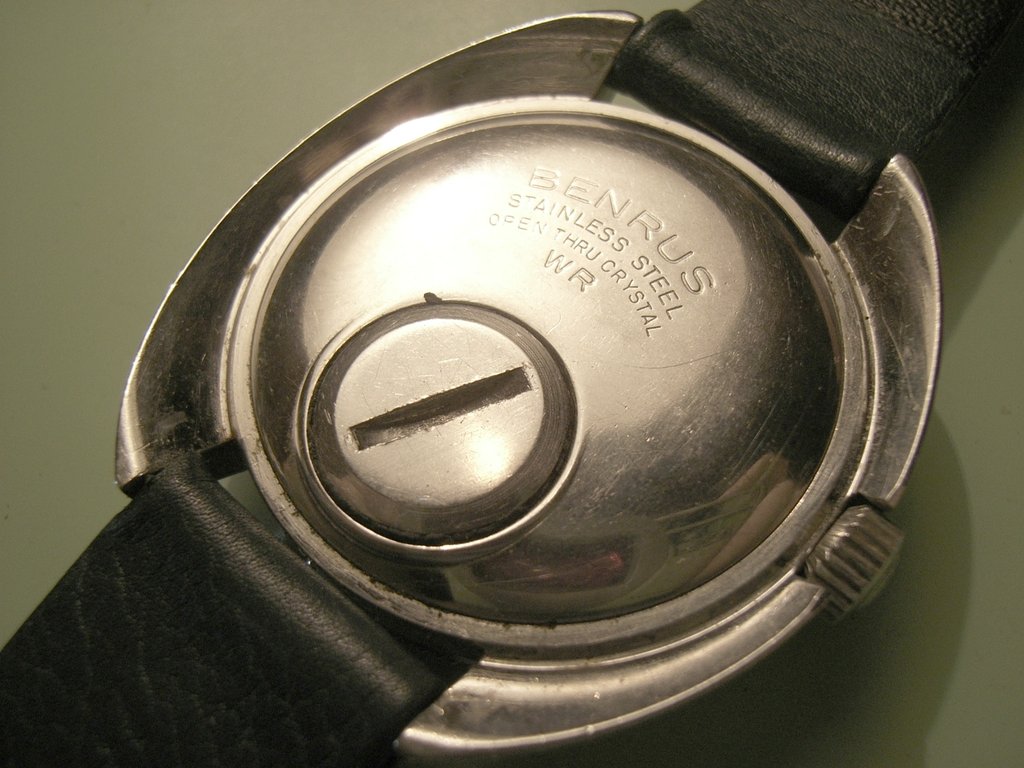 I got the watch in a non-working condition. It does only run for a few seconds after you gave it a swing manually. The hands move freely however. Let´s peek inside.

Here I have removed the crystal with a crystal lift tool. 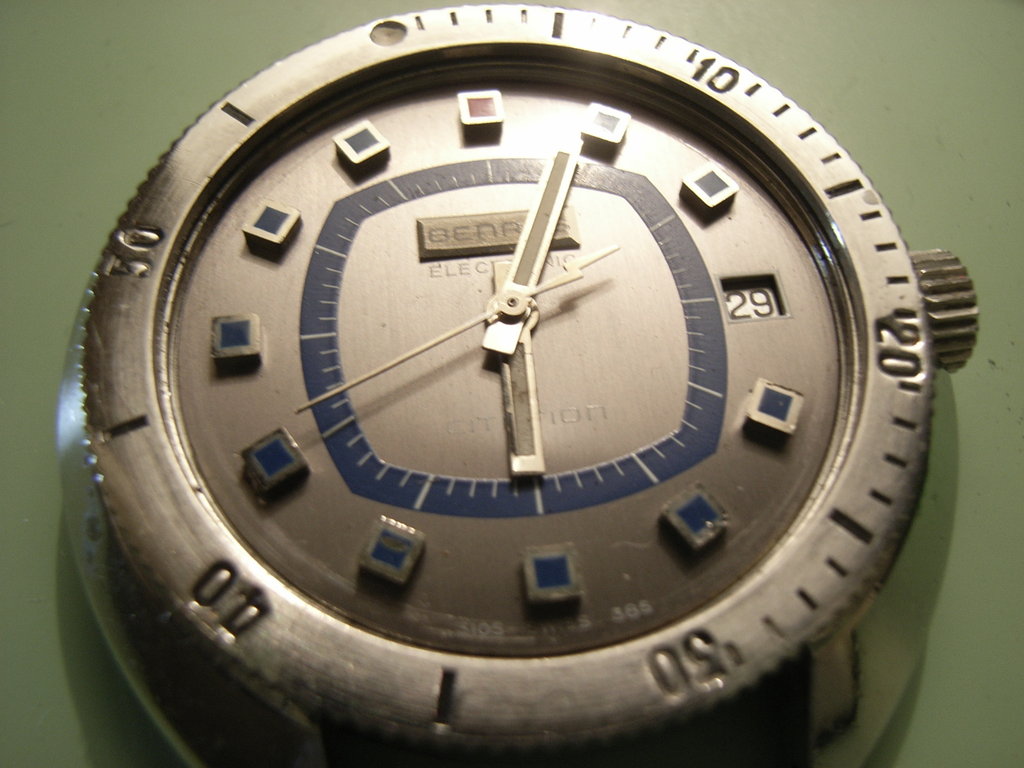 The movement with dial comes out easily after the crown has been pulled... 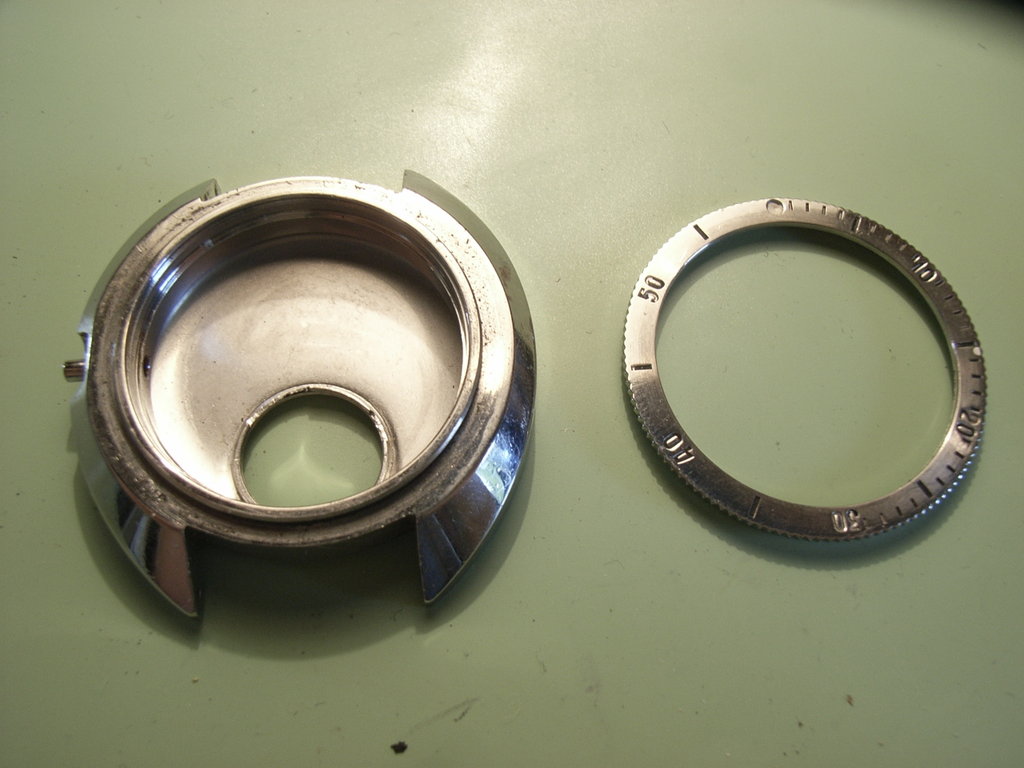 Closer inspection under the microscope showed that the pivot was not centered in its bearing but out of it (blue circle). 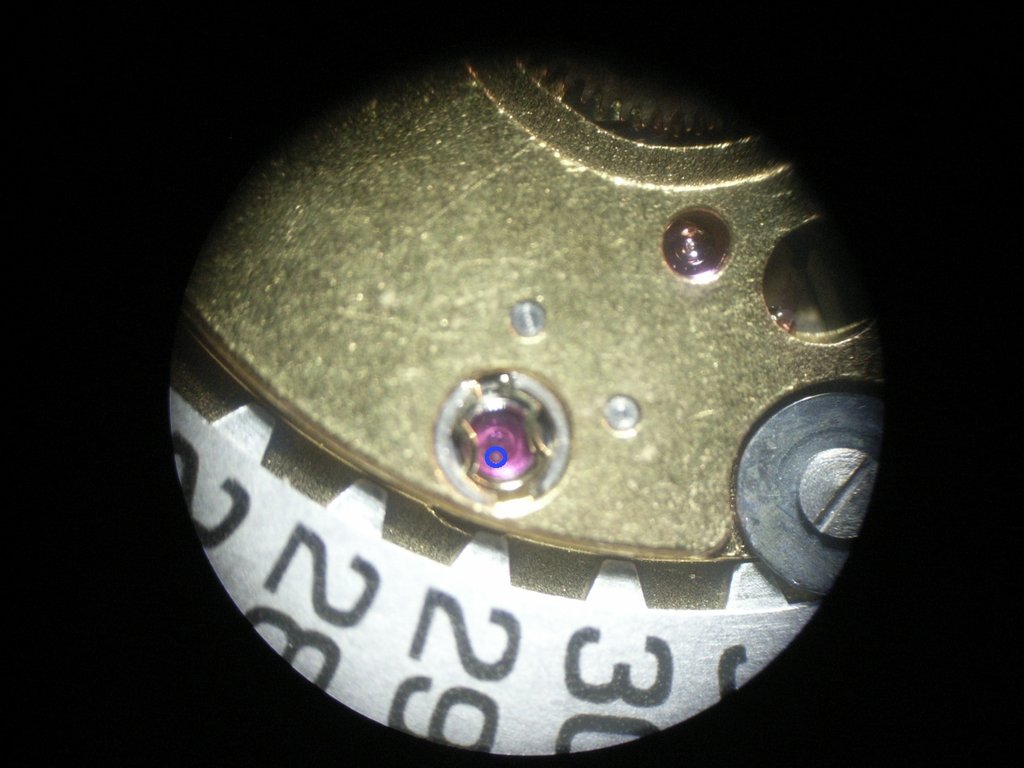 Was the pivot on the opposite side broken? No - fortunately not. The bearing itself had shifted upwards, probably due to a hard impact. I had to get the balance wheel out and push the bearing back in place. 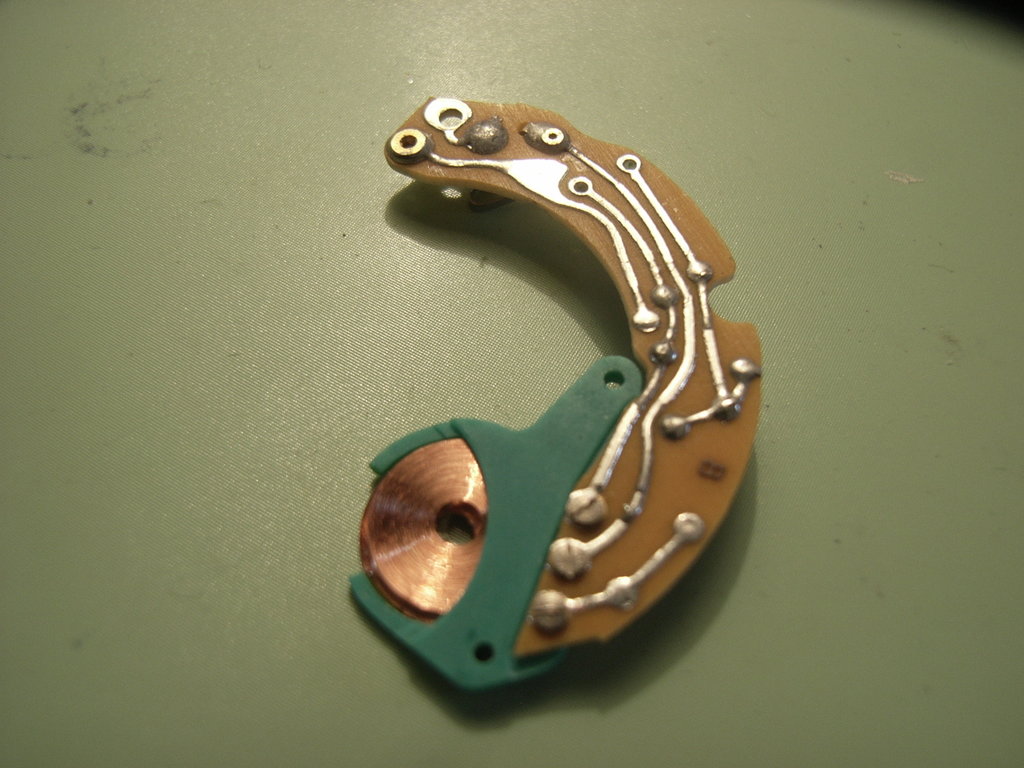 The driving circuit is built out of discrete components - replacing defective parts, including the screwed-on coil assembly, is therefore pretty easy. Checking of the module showed no problems here.

This is the mechanical part of the movement - I have already removed the balance wheel here (its two-layer construction and the strong magnets make it quite heavy - so don´t let it fall down and deform the balance spring). 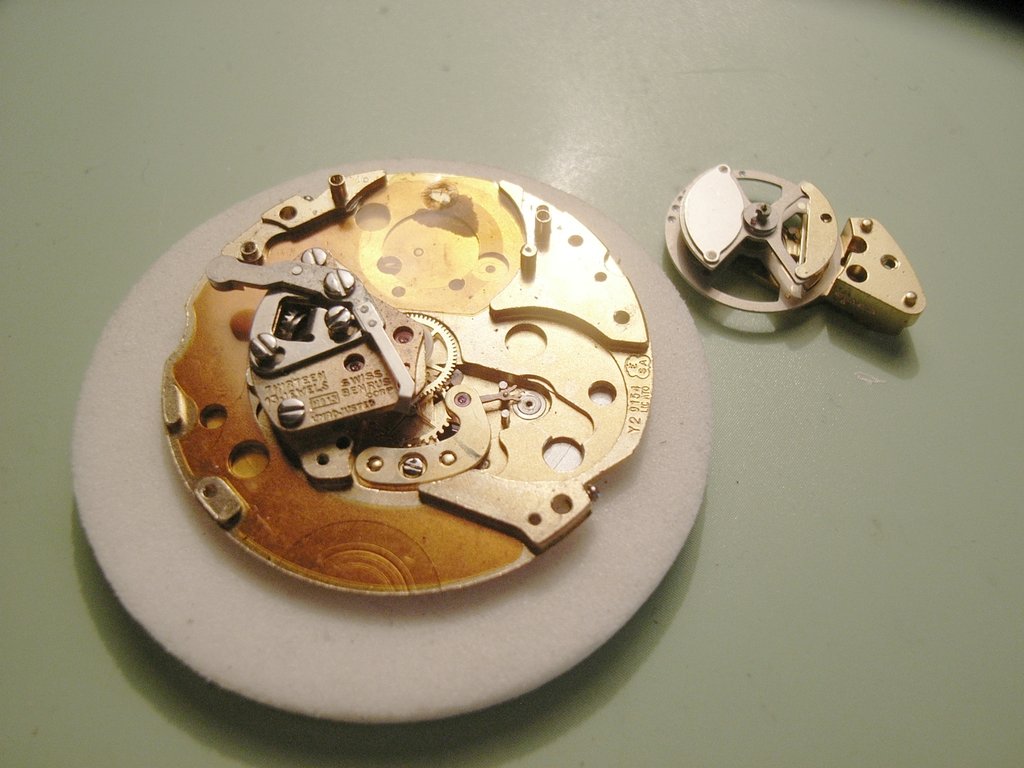 Because it fits in at this point: The ESA 9154 was a great movement for its time. As you can see, all gears feature jewelled bearings and there are no plastic wheels (not yet, but the plastic age in horology came soon after these movements...). Additionally, the modulary contruction makes it well-serviceable. Thus it is not surprising, that even chronometer-certified watches of this era had this caliber inside...

After I have reseated the bearing with a staking tool, the balance wheel swings perfectly again...this is how it looks like under the microscope: 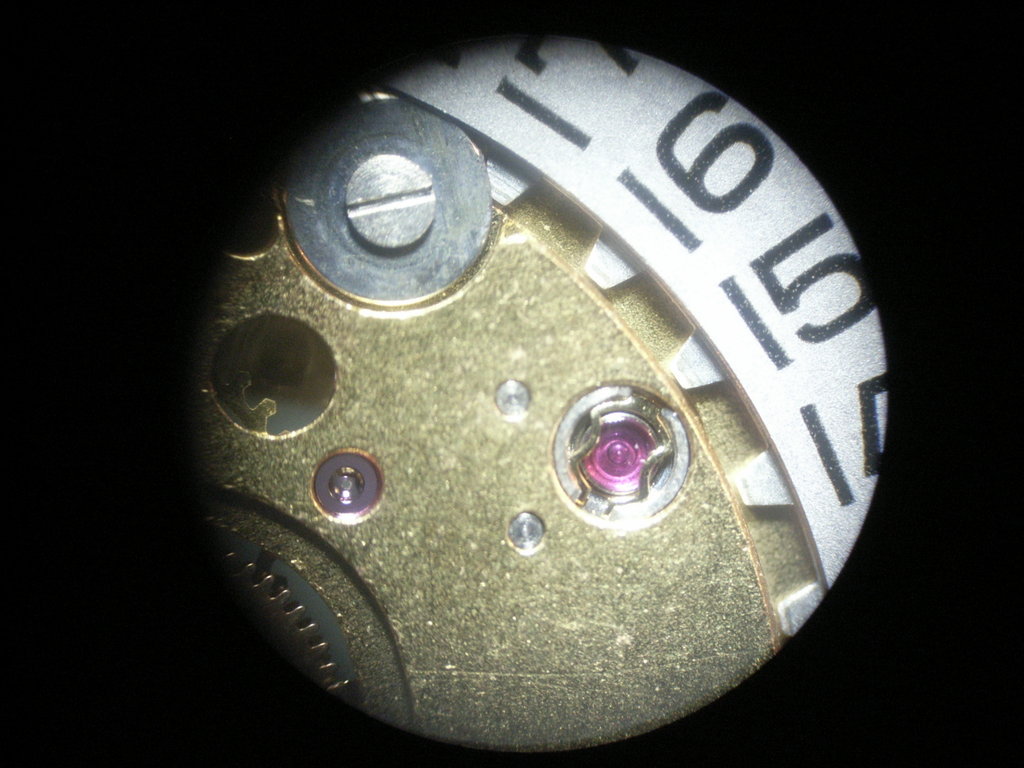 So far for now. I will continue with polishing the case and cleaning the movement. Check back soon,

After many months of shelf time I finally finished the watch - here the report with lots of pictures. 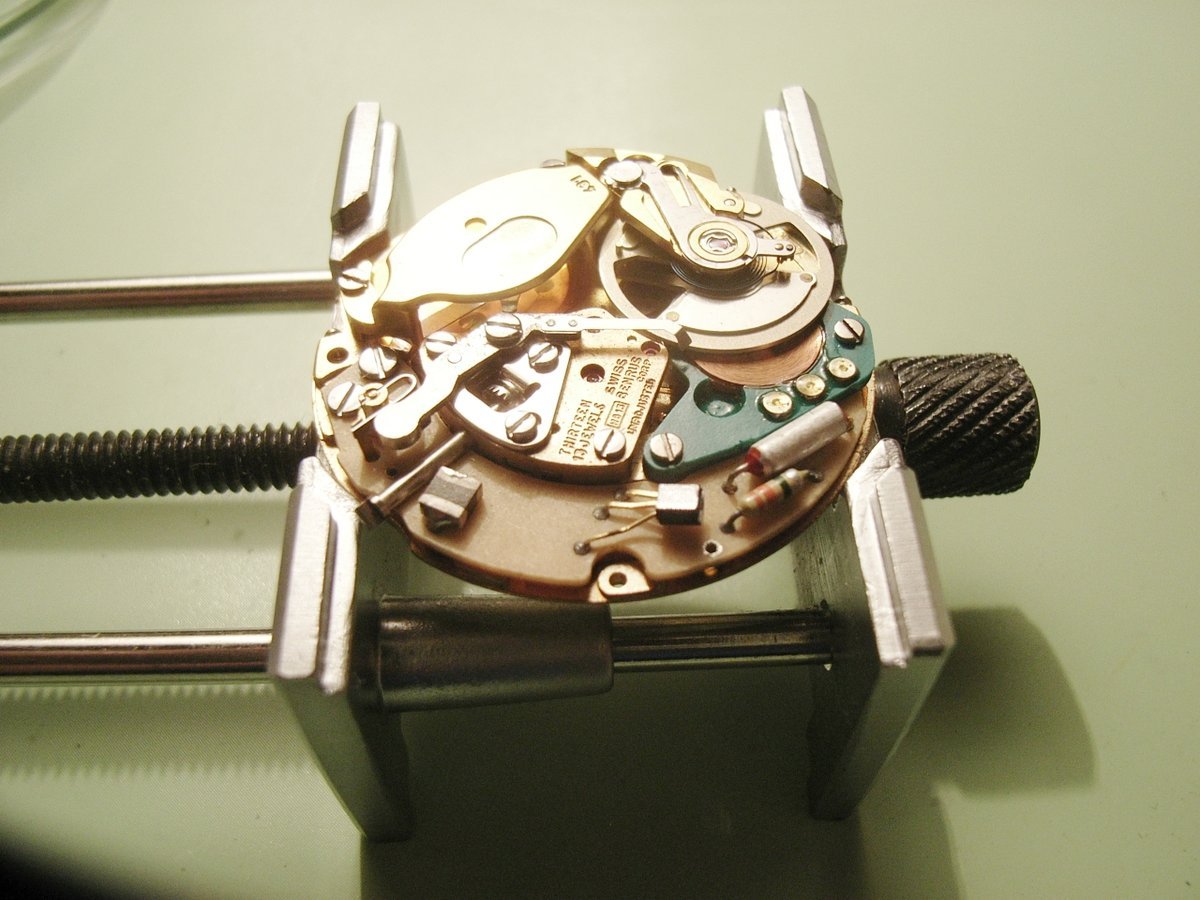 The picture above shows the movement after I repaired the faulty balance bearing - I continued to disassemble and clean it. 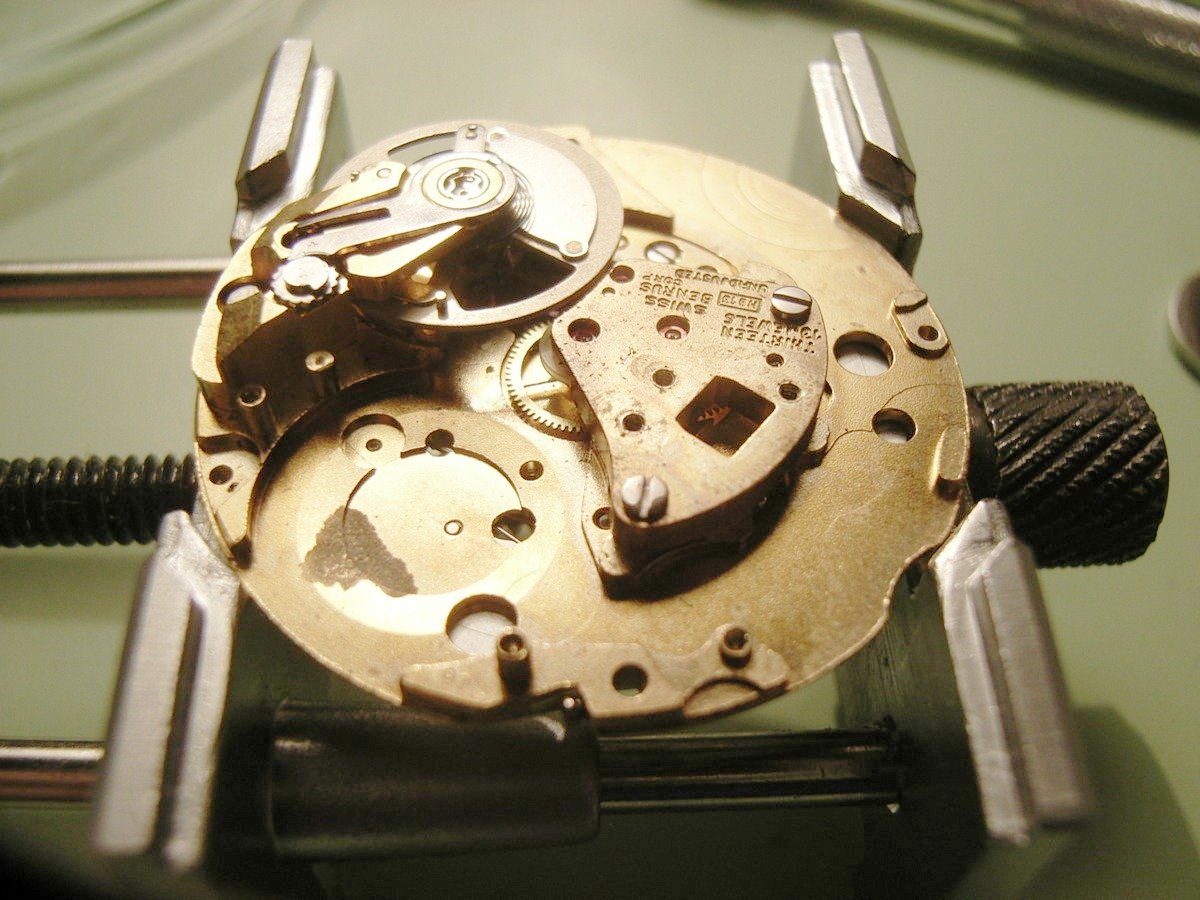 Some battery acid corrosion under the plastic battery insulation. 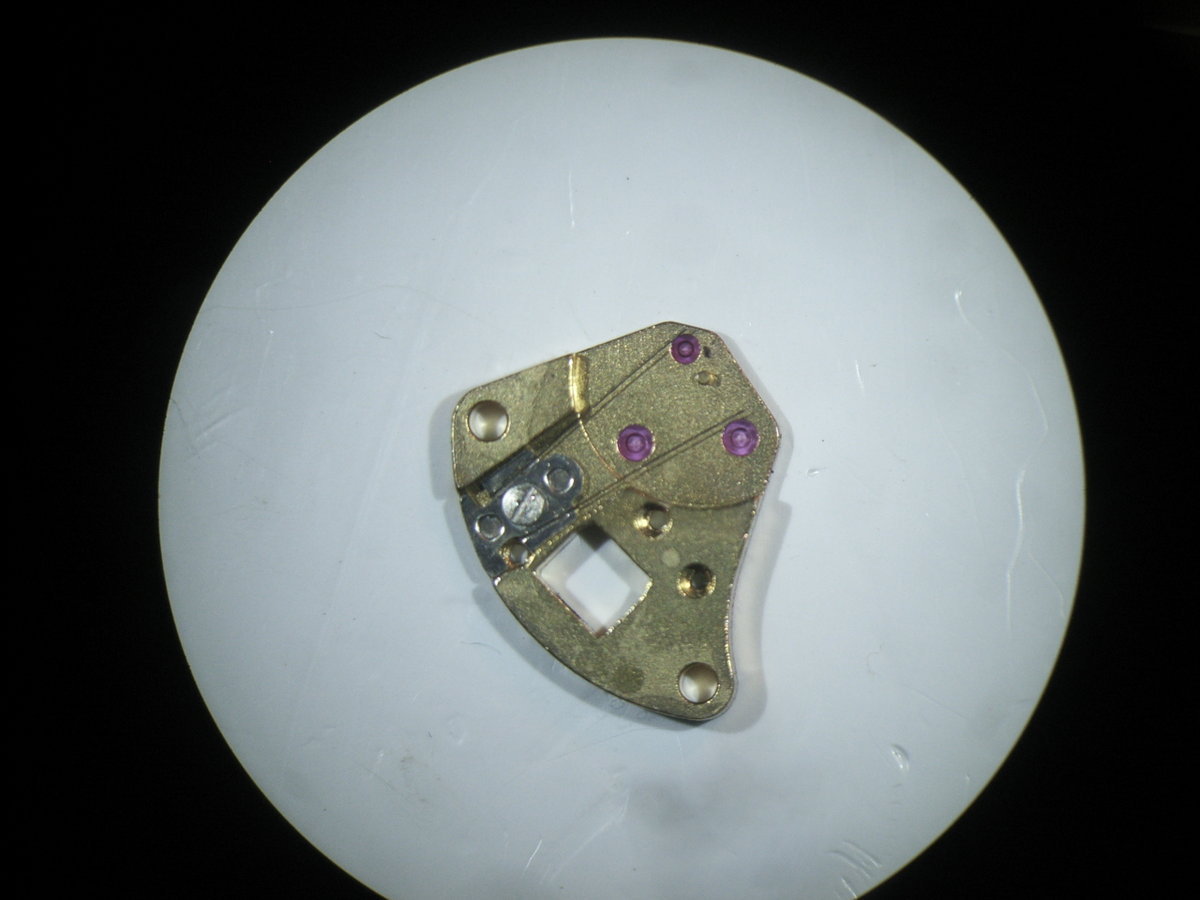 The wheel bridge - some protruding pins hold the wheel in place - more on that later. 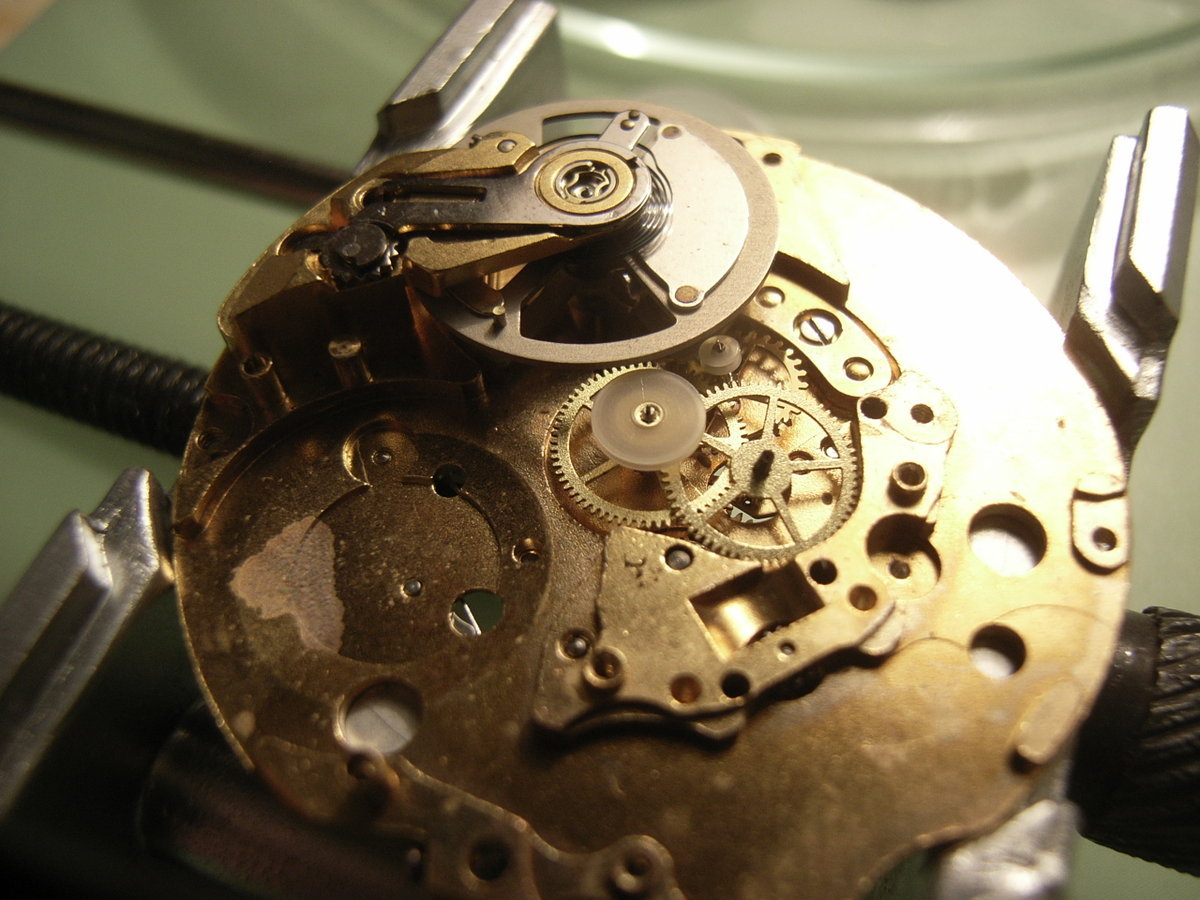 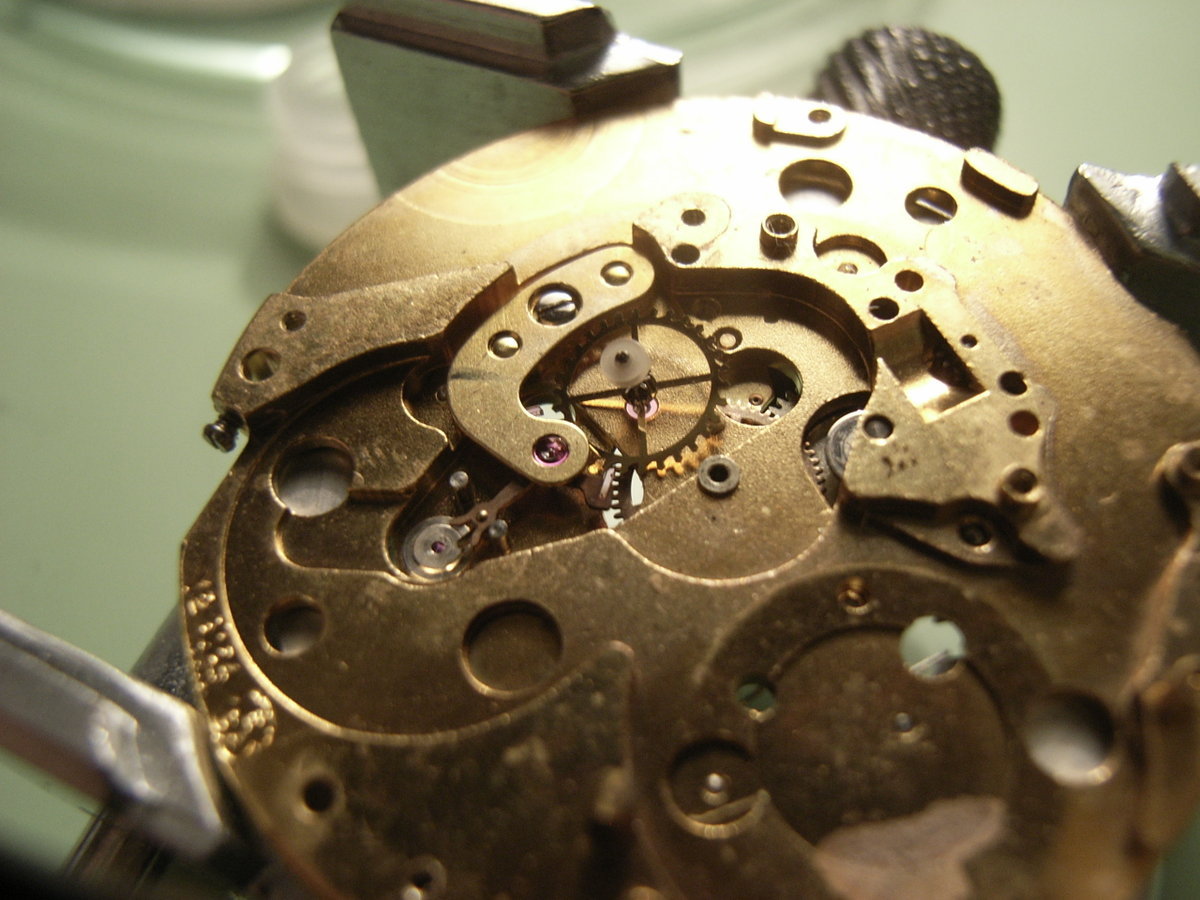 Anchor with drive wheel (the balance powers the movement of the wheels and hands). 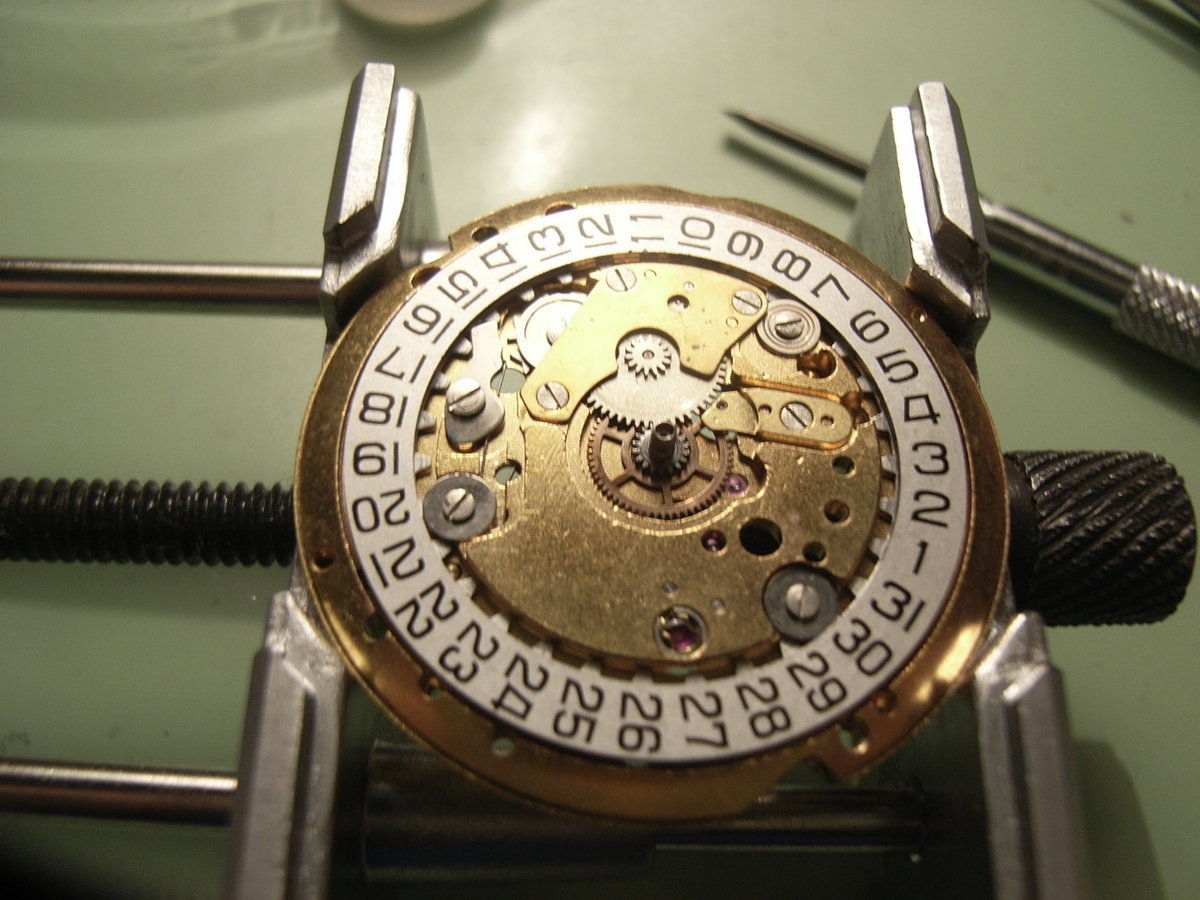 The calendar mechanism (=CM) and friction wheel (in the middle). 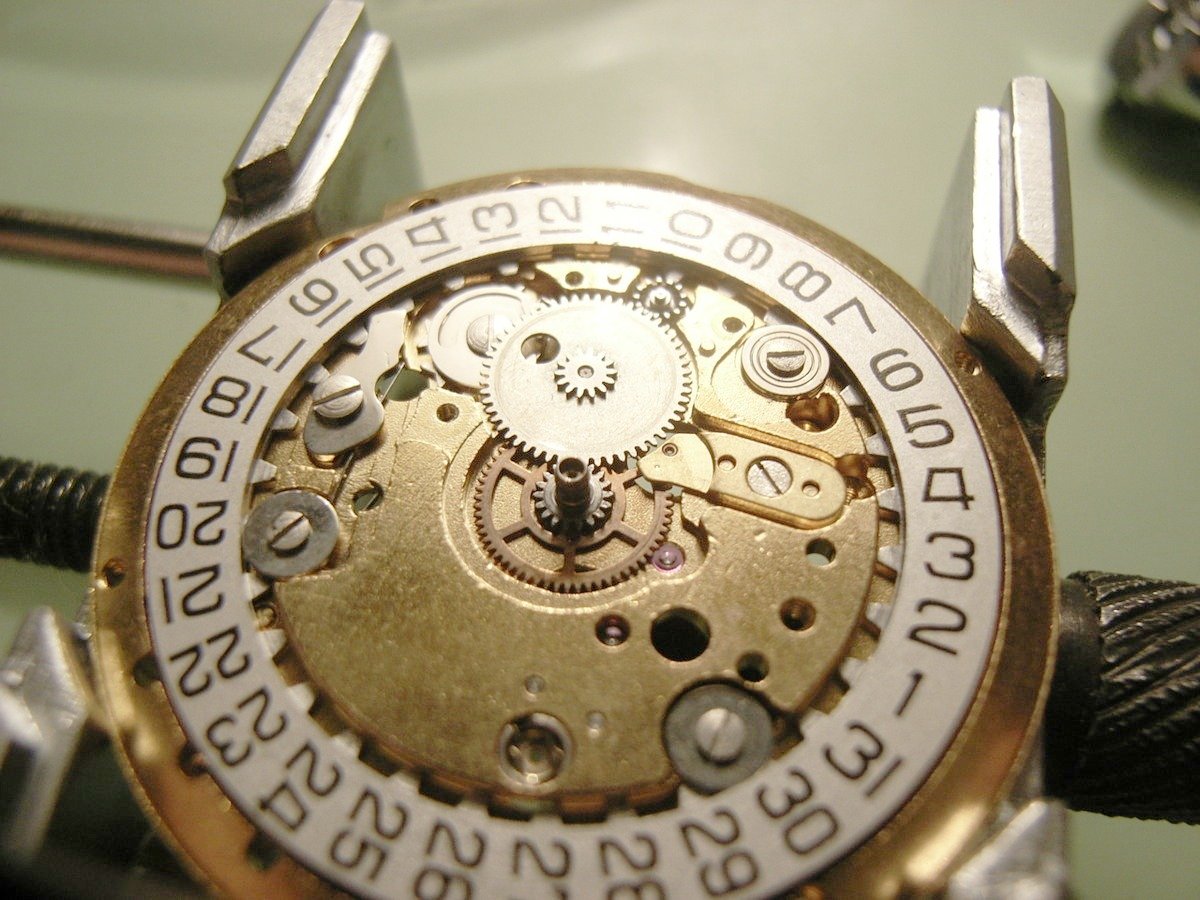 Starting to disassemble the CM. 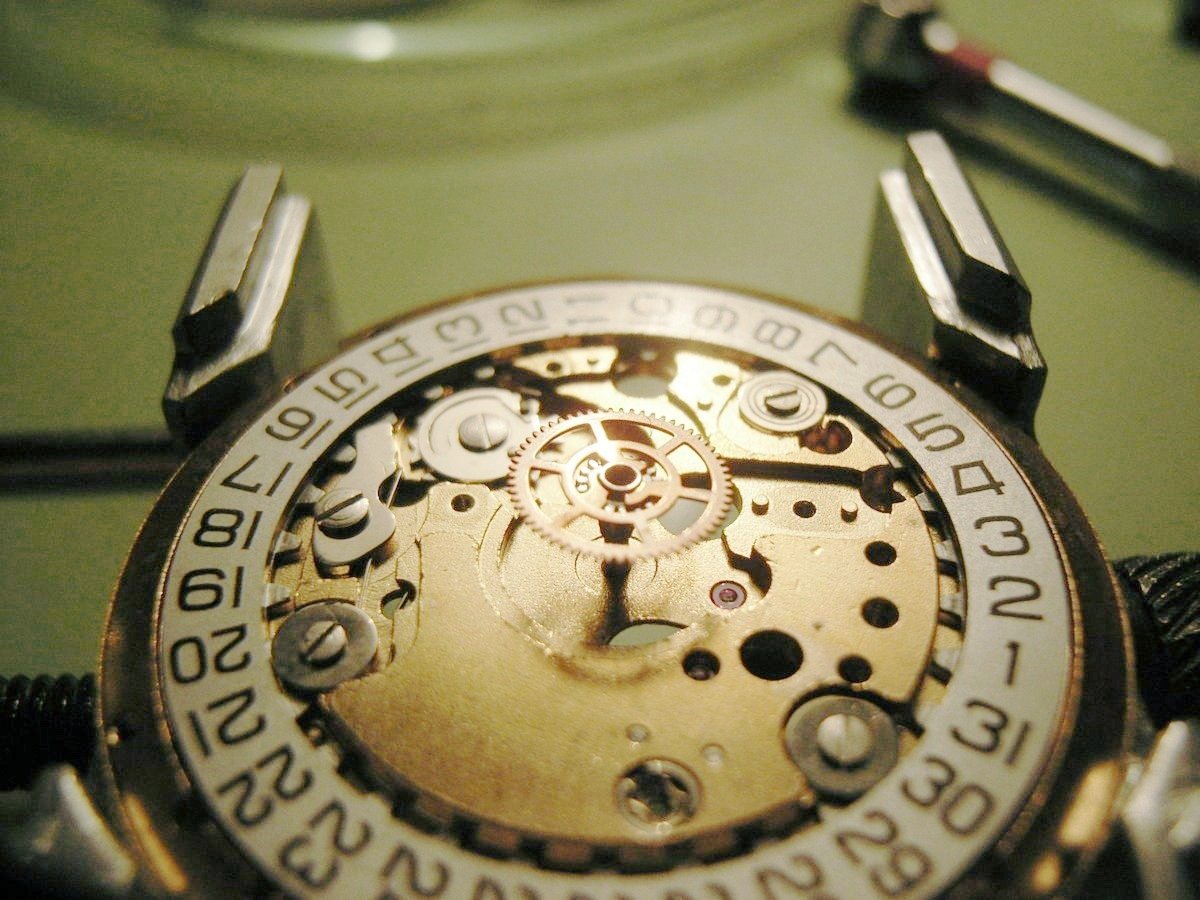 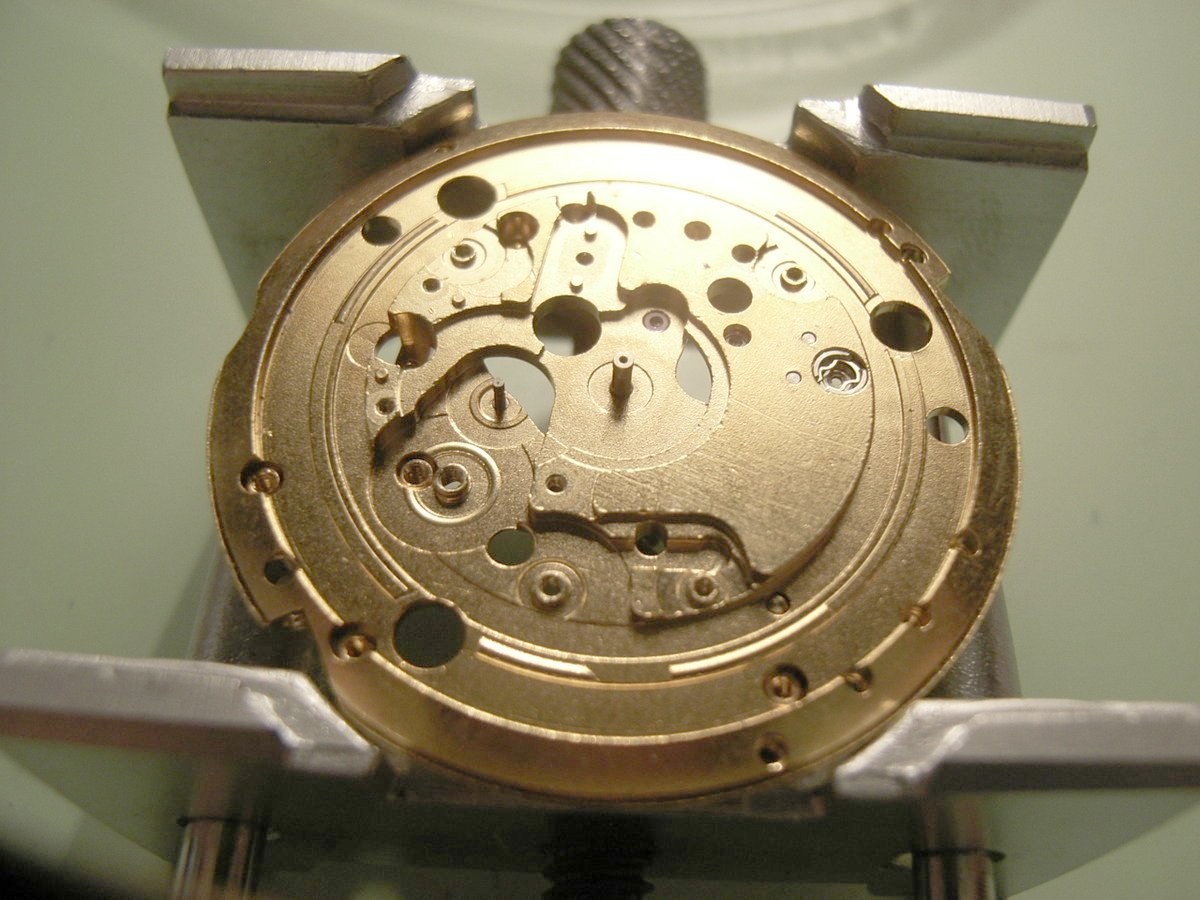 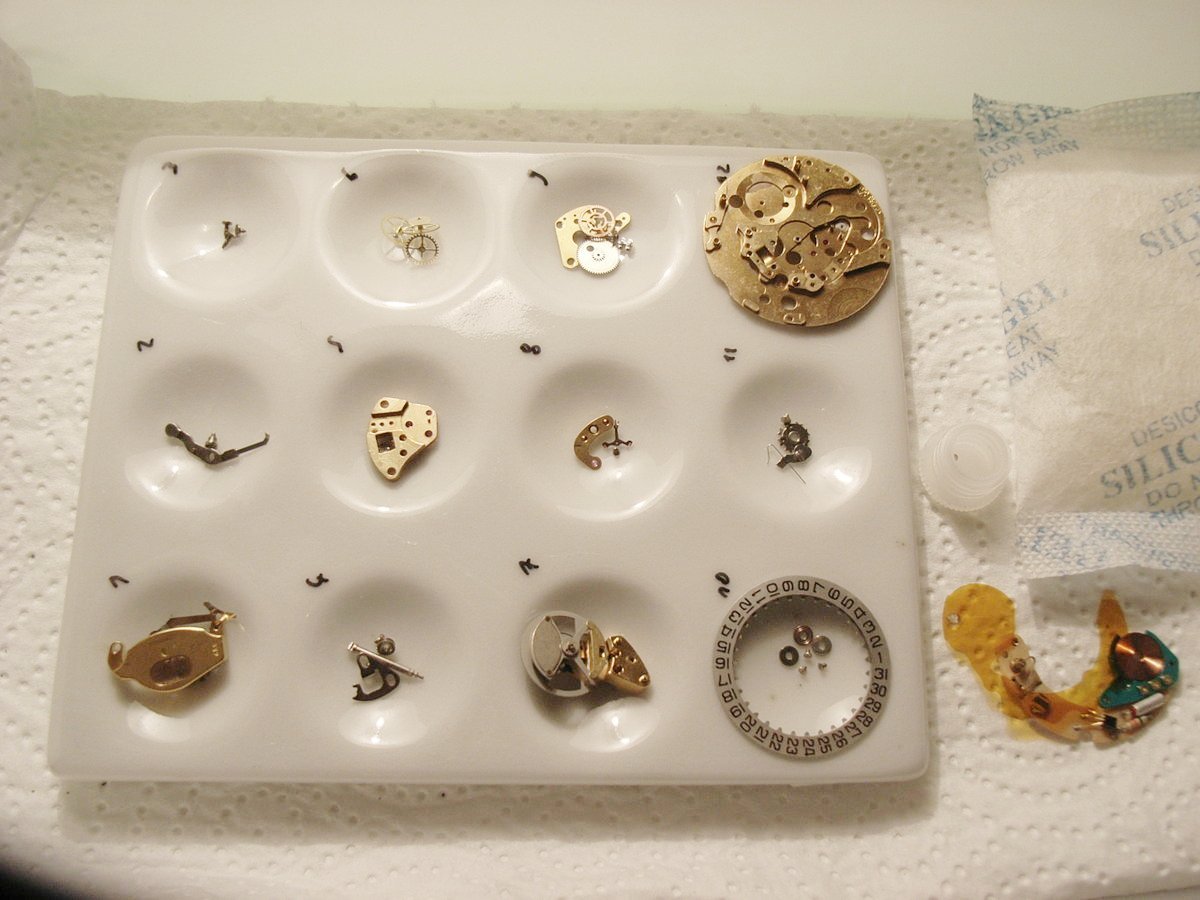 All building groups before cleaning... 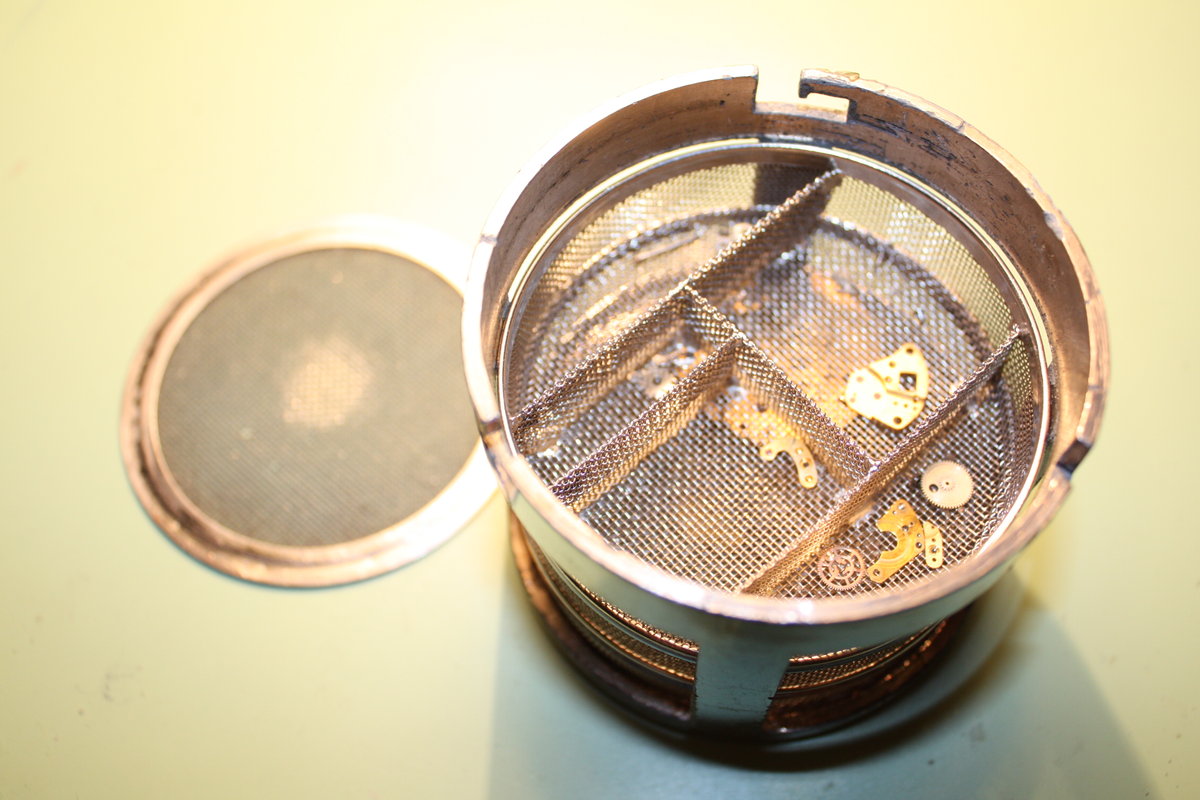 ...and after drying in the cleaning machine. 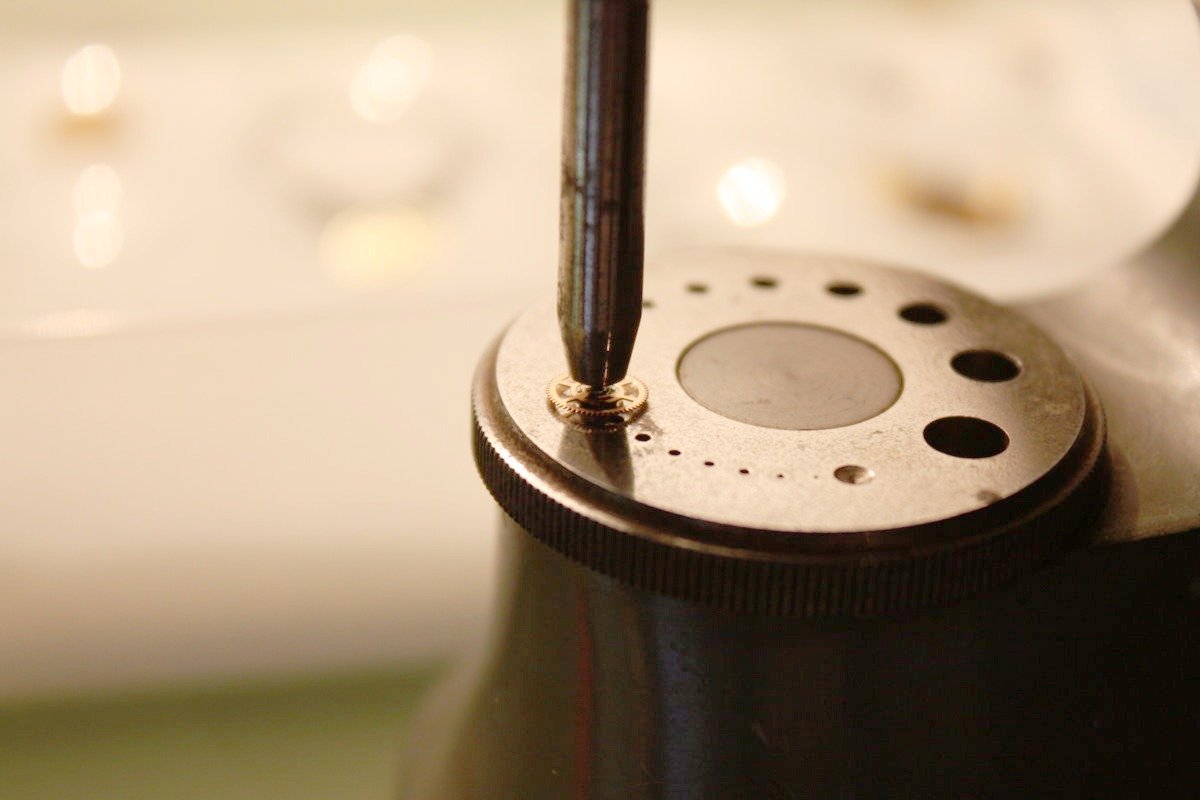 Preparing the friction wheel in the staking tool. 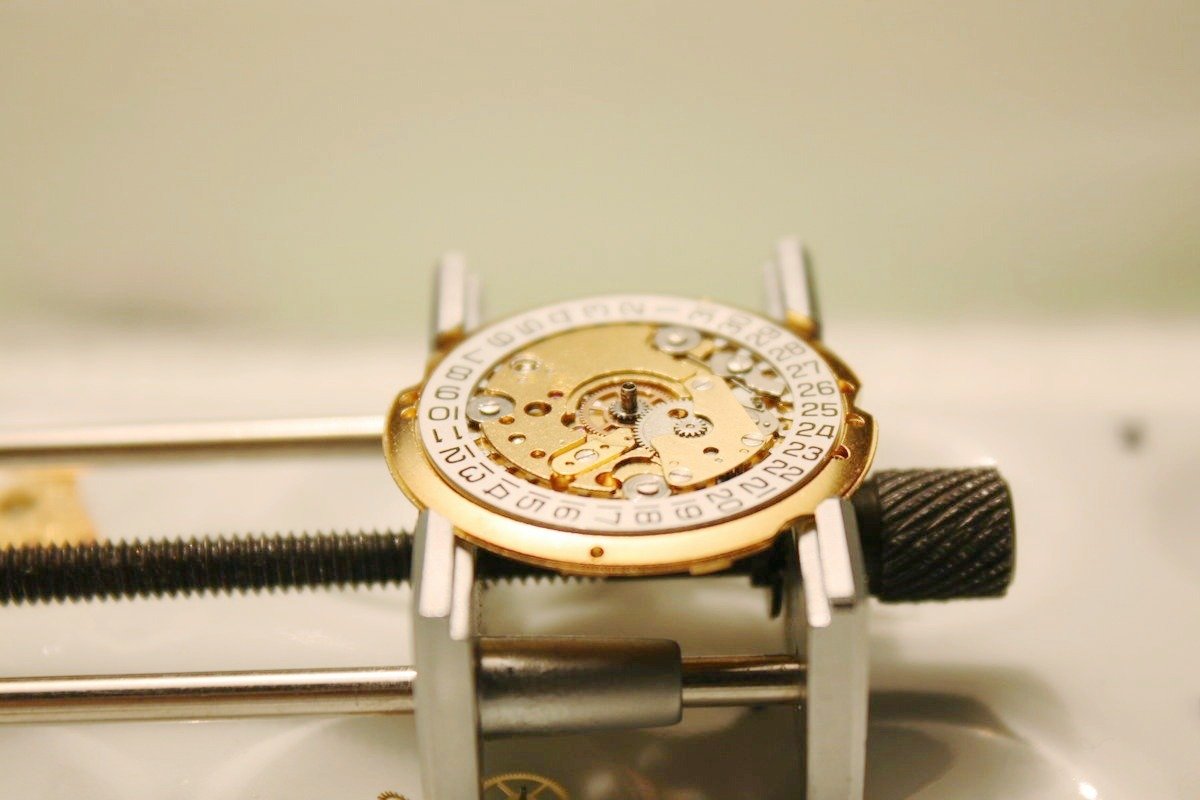 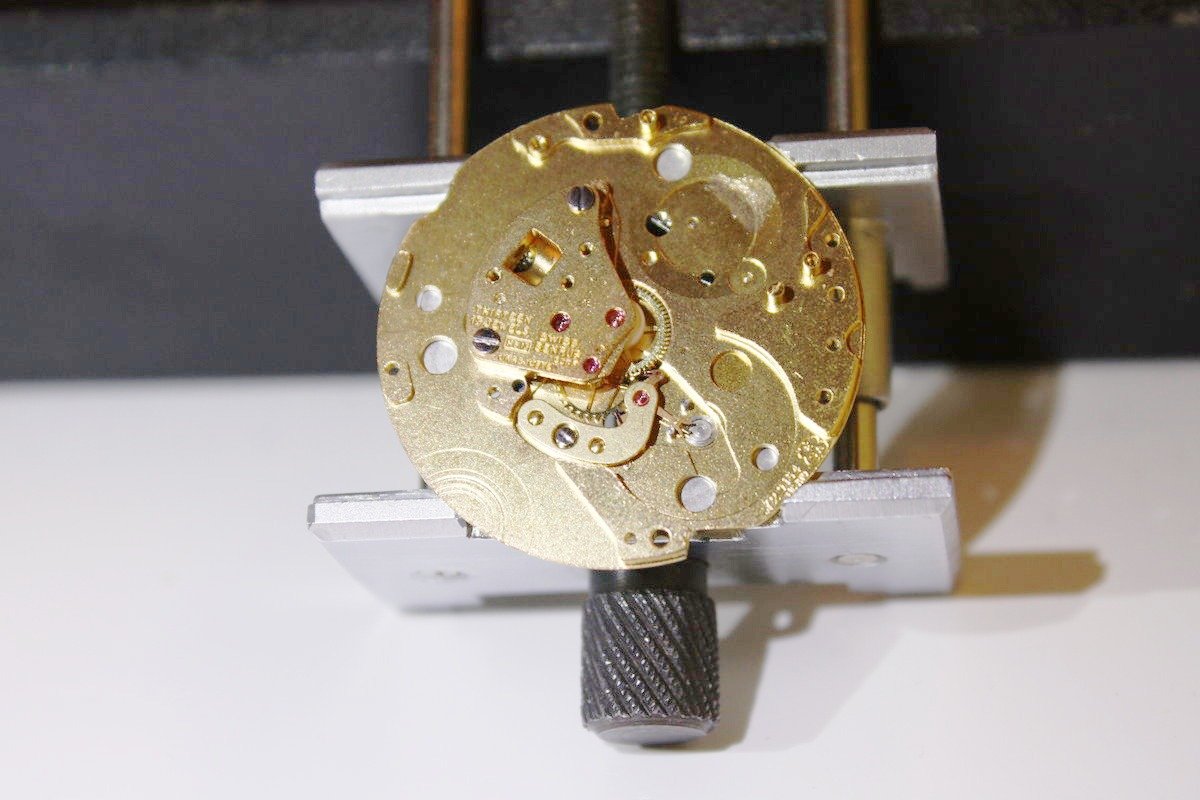 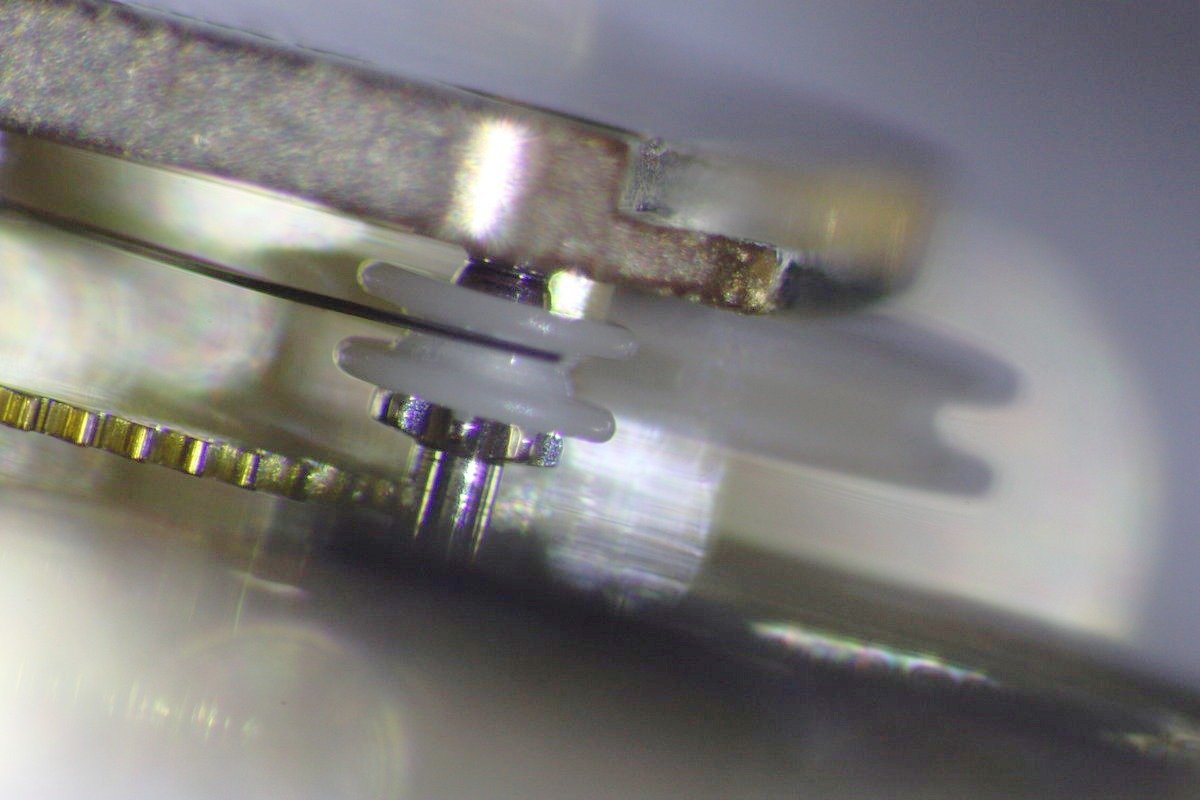 ...it is important to re-align the two guide pins under the microscope. 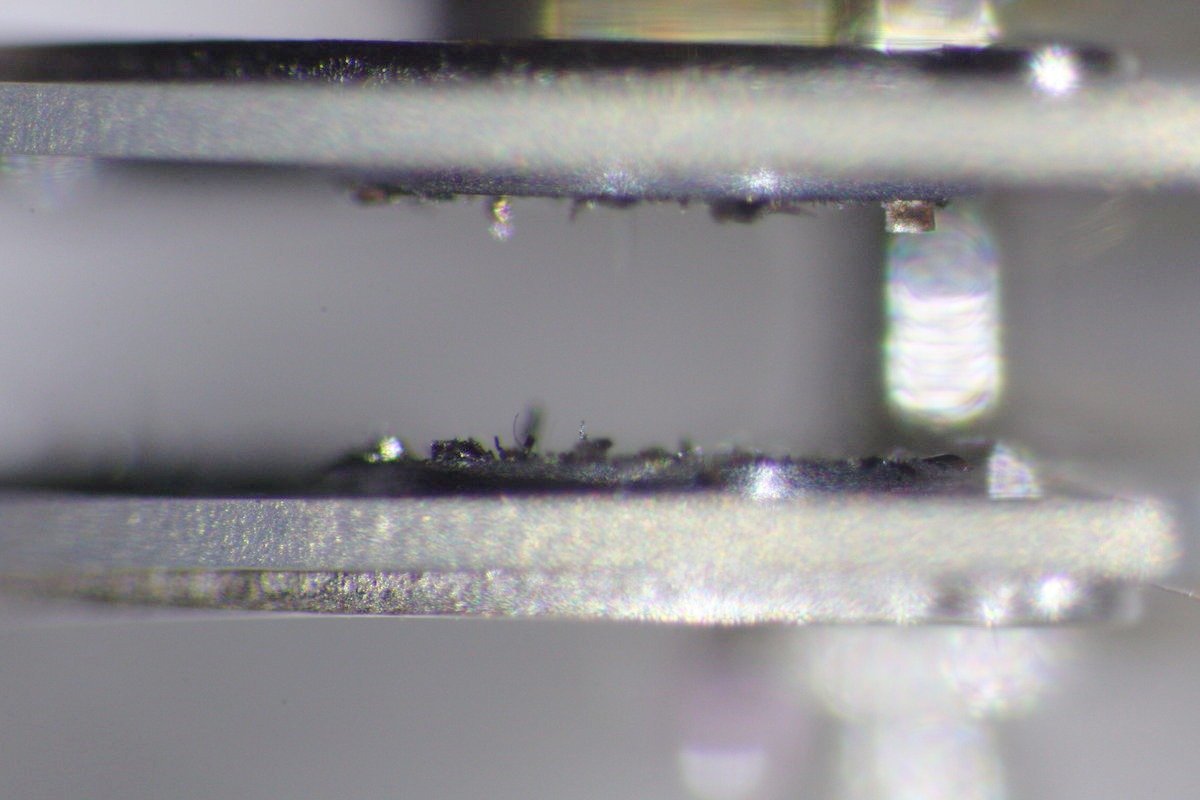 And another thing to take care of -> magnetic particles which were floating in the cleaning solution need to be removed from the balance wheel magnets (particles like small pieces of wire can destroy the drive coil beyond repair!). 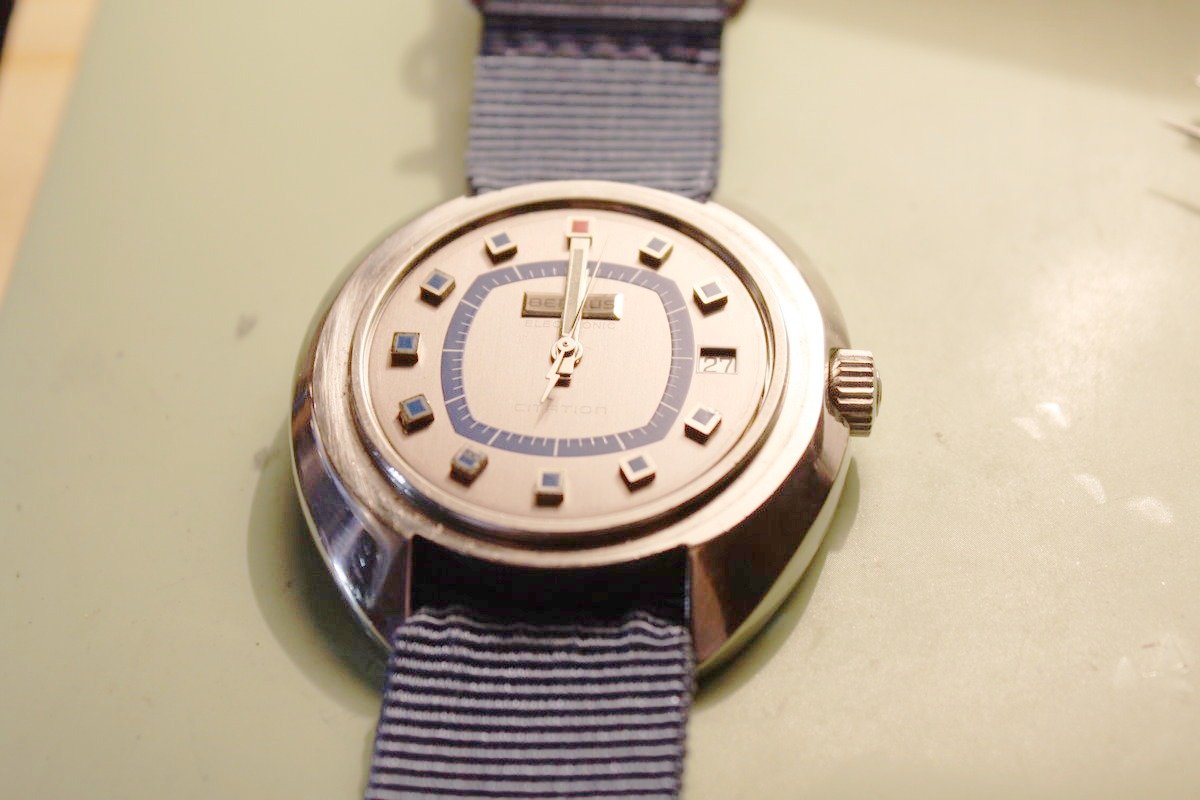 Putting the hands back on. 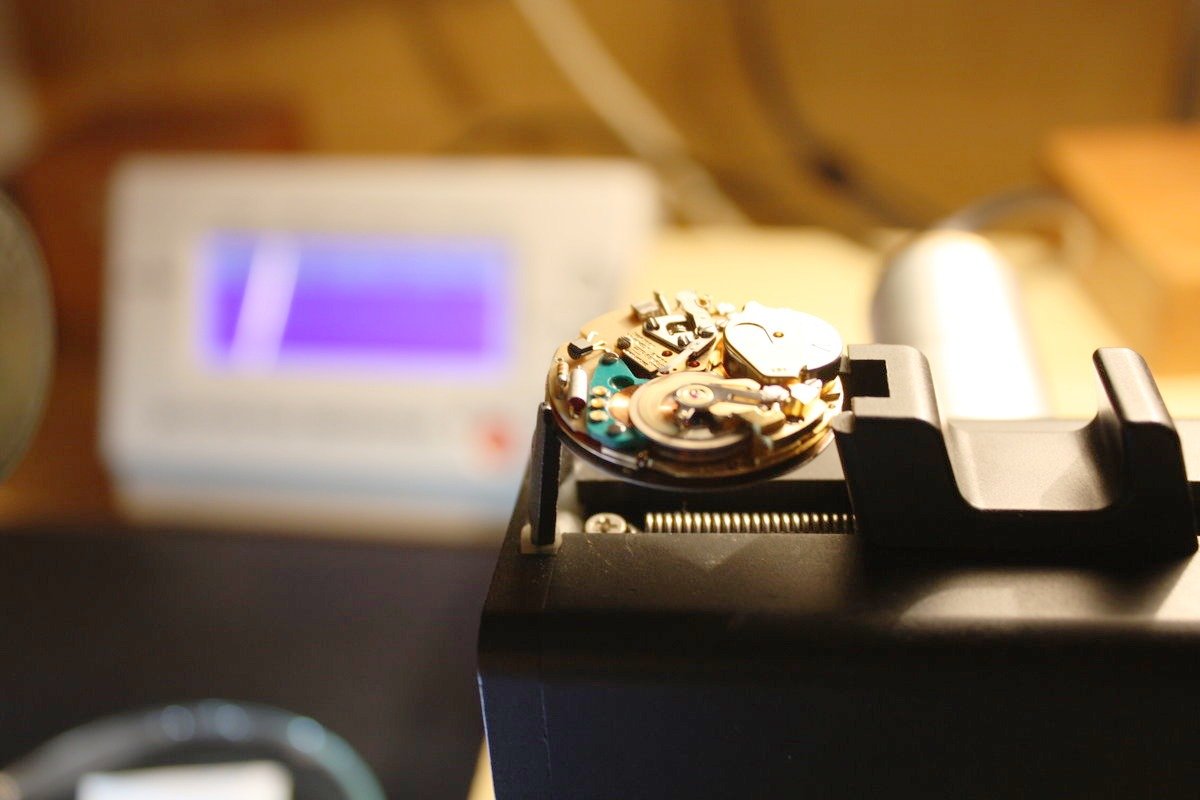 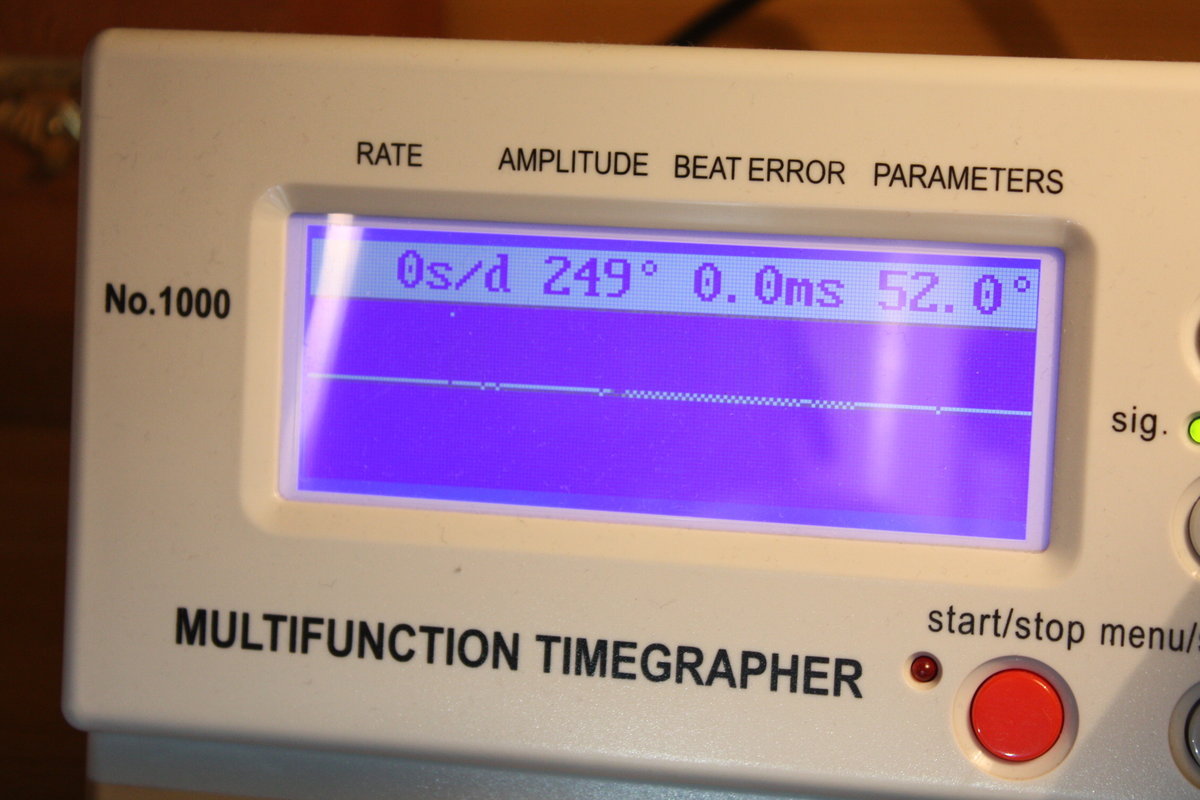 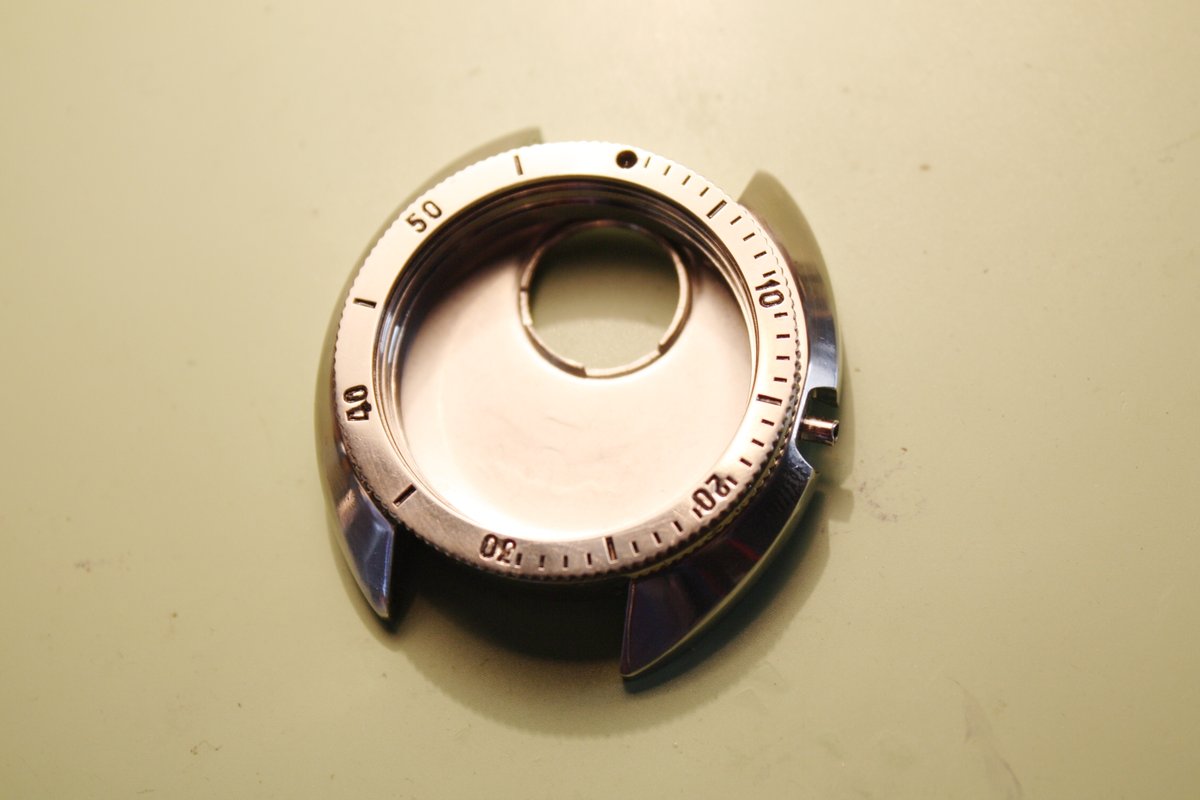 I finished polishing the case already some time ago (the bezel numbers and markers got some new black lacquer). 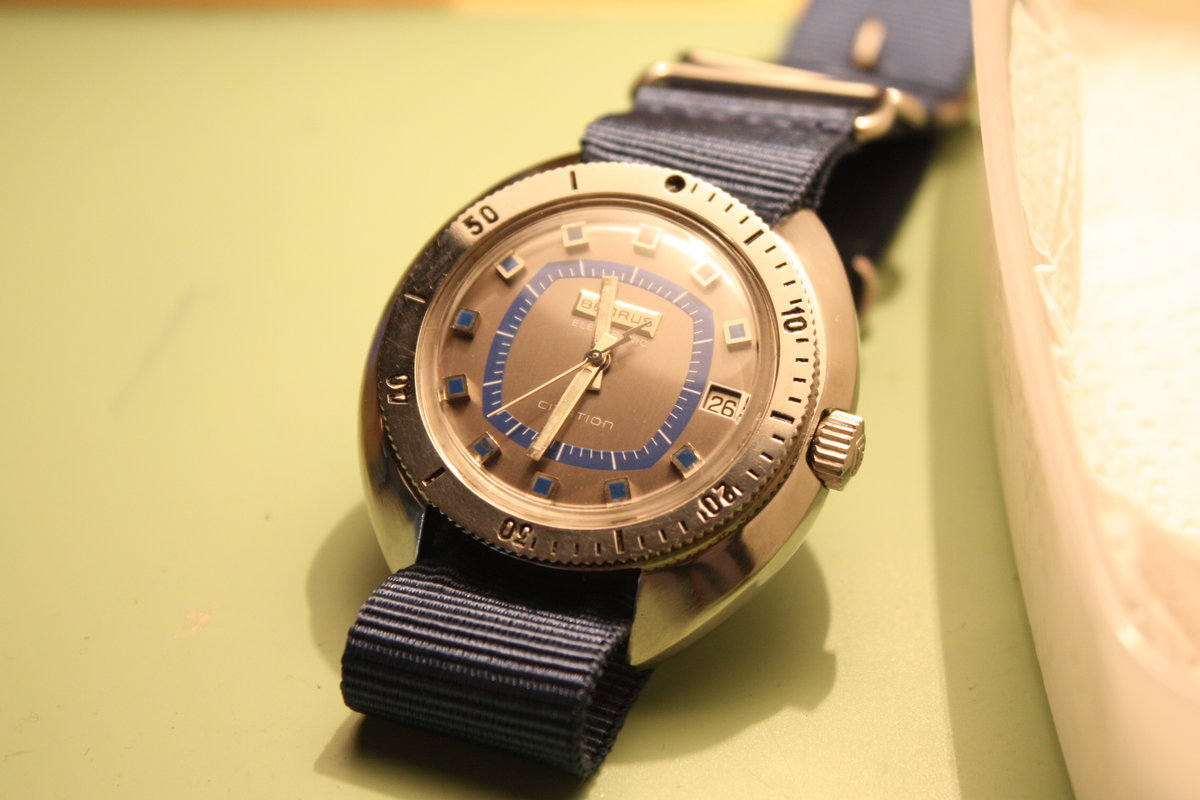 The finished watch with a blue nato strap to mirror the colour of the dial markings. 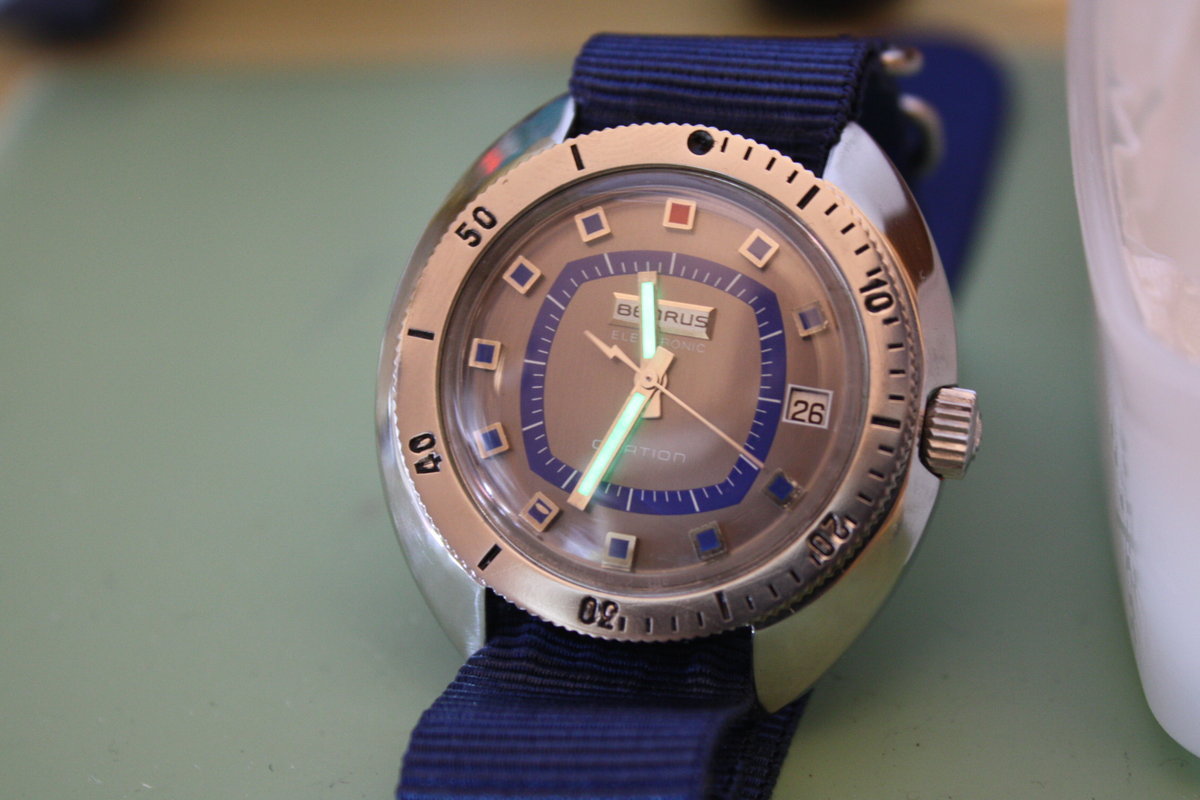 The Luminova-based minute and hour hands with their new long lasting glow.